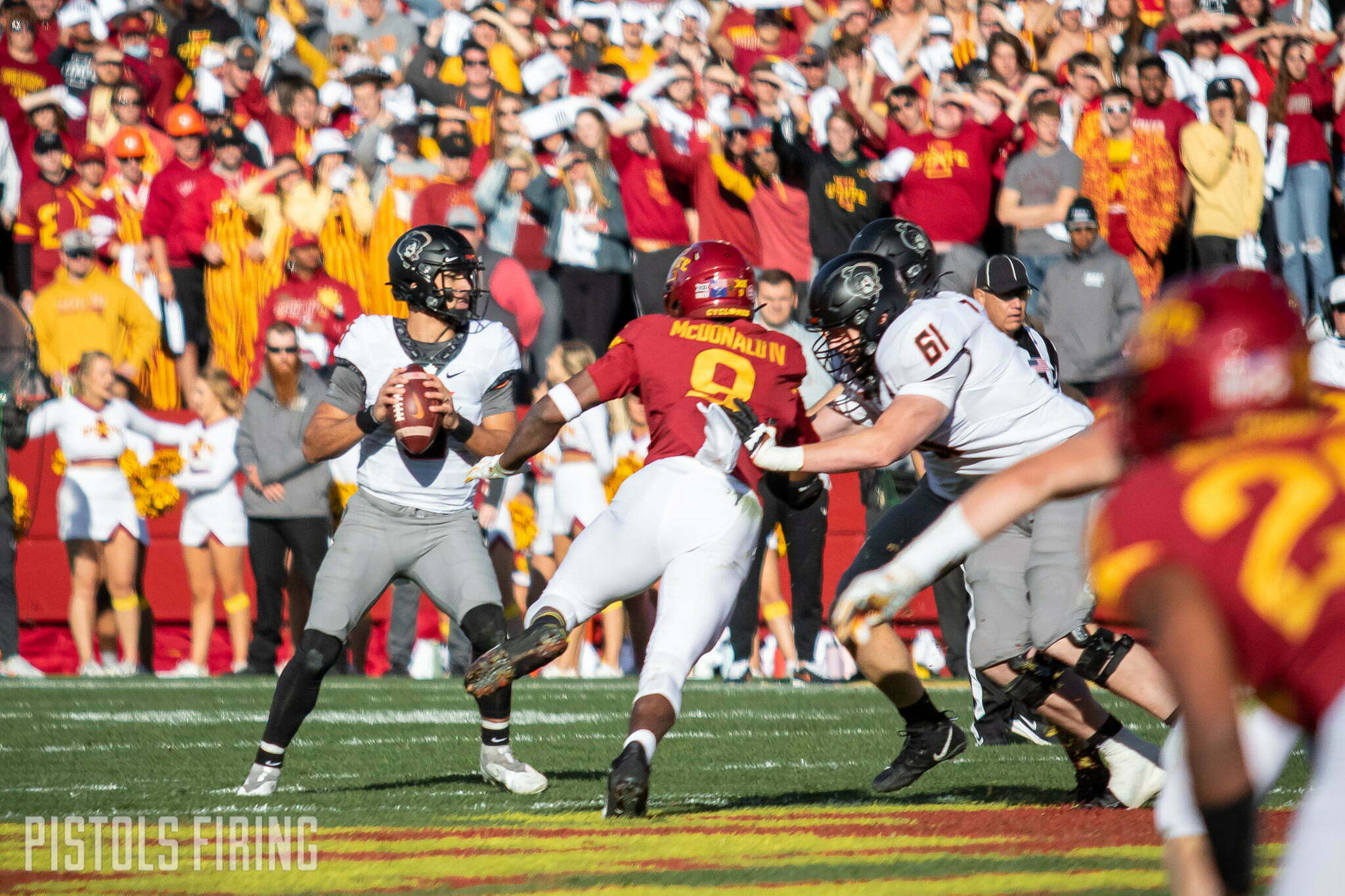 I’ve been generous with my grading scale all season long to the dismay of many. I’ve pounded my fist on the table for Mike Gundy and the coaching staff amid some struggles (particularly on offense) and I’ve graded on a scale for the most part all season because … well … OSU has been winning.

That is no longer the case after OSU took a 24-21 loss to Iowa State on Saturday and, therefore, I’m no longer grading on a scale. As such, the report card is as ugly as it has been all season. Let’s get right to it.

Mike Gundy emphasizes the importance often of putting his players in position to succeed. For the most part, I think he did that Saturday, so I can’t flunk him here. If OSU’s two attempted field goals — both missed — were instead both makes, then perhaps they escape with a win.

That said, the kicking attempts were a few moments that probably won’t be on the top of Gundy’s Hall of Fame resume. The 50-yard field goal attempt in the first quarter was chief among them. Kicking a field goal on 4th and inches from 32 yards later in the game was another. I’m firmly on Team Never Kick, but in those spots it made more sense to go for it (and especially in hindsight).

Play-calling wasn’t great, either, and the offense really never got enough momentum to really take the game and ice it. That’s in part a credit to Iowa State’s defense — it’s really good — but also somewhat damning of OSU’s offense, which all season has been unreliable. Mustering just 21 points on the road against a borderline top-25 isn’t going to be enough for a win in the Big 12 on most occasions and that was the case Saturday. It has to improve for OSU to have a shot at winning the league.

What do we even say? OSU’s defense is great. Give Jim Knowles a five-year rolling contract and a box of cigars. This man has transformed the defense in a way no one really thought possible even a few years ago. They held ISU star Breece Hall to 70 yards rushing on 21 attempts and limited the team to 24 points — obviously not quite low enough to win but 18.3 points below its season scoring average. The defense held up its end of the bargain.

The officiating was bad. At least it was bad for both teams, I guess?

In one particular example, the officials deemed an Iowa State WR committed unsportsmanlike conduct for high-stepping to a touchdown and took the touchdown off the board. It’s technically OK in the rulebook, but … felt pretty gross. Then, of course, the fourth down play called short for OSU late that effectively ended the game was pretty bad, too. It looked pretty evident that OSU got the yardage necessary to move the chains but the official ruling was that it was short, and only one camera angle was available. In 2021! It was a really poor day to be a Big 12 official.

Tay Martin made the biggest play of the day for the OSU offense Saturday as he hauled in a 25-yard pass from Spencer Sanders and holy smokes was it a dart by QB1. He dropped it in perfectly in just a spot where only his man could get it and positioned precisely where it needed to be. He didn’t put up mega numbers — he was 15-of-24 passing for 225 yards and three scores — but he did not commit a turnover and made key plays early in the game, especially with his legs, to lead OSU’s offense. Thought despite the win and some struggles on offense he played pretty well. Gritty performance and something for him and the offense to build off of.

The weird thing is that I think for the most part this coaching staff has done really well in making in-game adjustments and executing on gameplans — I mean, it attempted 13 passes on the road against Boise State and still won — but it does seem like some of those halftime adjustments it should be making are not being made quickly enough. If OSU is just going to flail in the third quarter and try to fight back in the fourth quarters it’s going to play a lot more close games and find itself on the wrong side more frequently than it has this season.

Not a huge sample size to go off here but the sample we have from Saturday was not pretty. OSU missed both its field goal attempts, leaving six points on the board in a three-point loss, which is pretty brutal. It also got nothing on its punt returns, with both attempted returns netting an average of negative two yards per return. Tom Hutton — who had a booming 49 yard punt in the game — averaged 43.2 yards per punt for OSU to salvage this one from being an F.