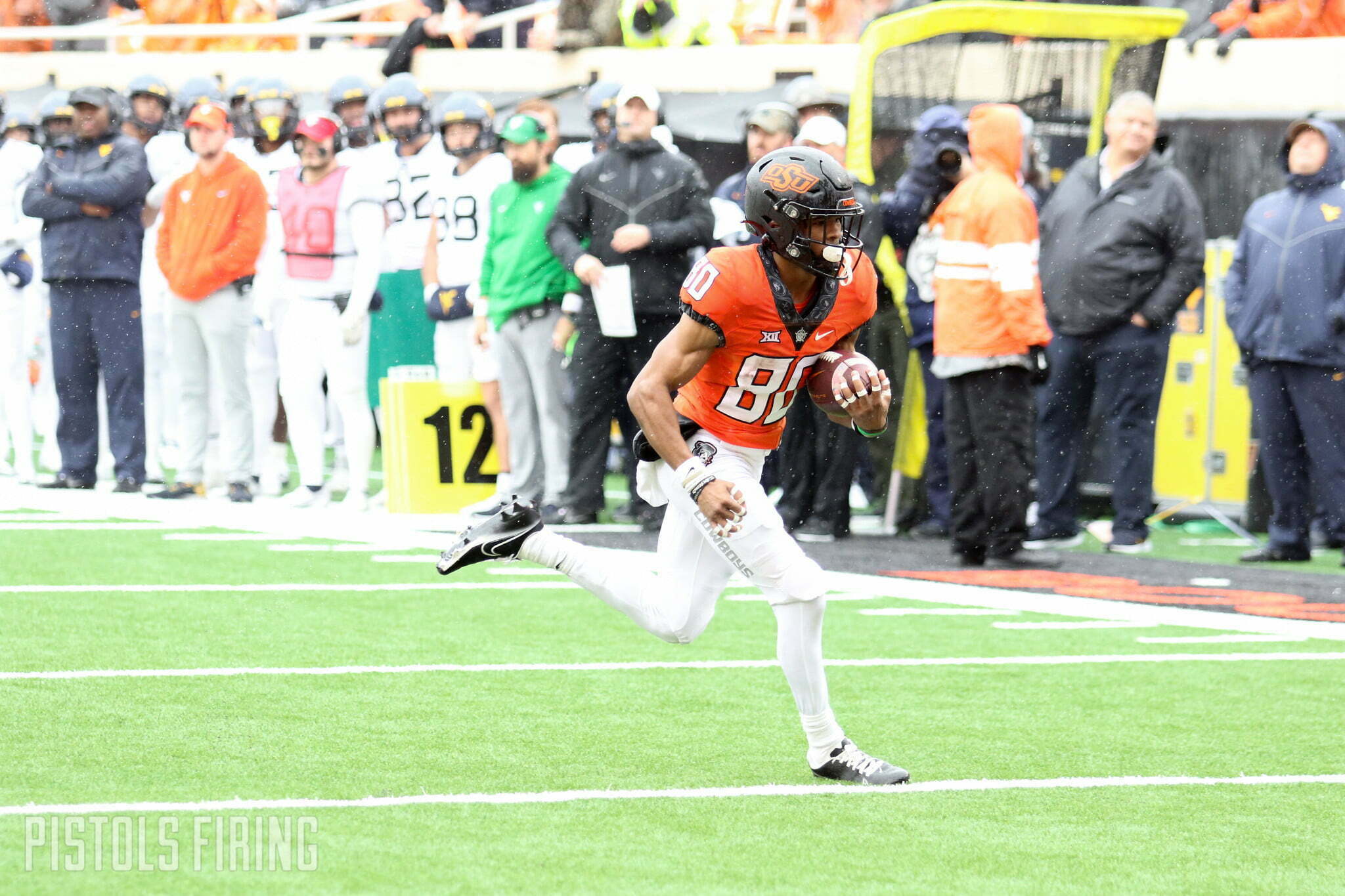 On a rainy, dreary and cold day in Stillwater on Saturday against 4-7 West Virginia, Oklahoma State — led by true freshman QB Garret Rangel — attempted 42 passes in a 24-19 loss to end the regular season.

With a true freshman QB making his second career start.

OSU, contrary to what it did the last month, leaned a bit on its running game and true freshman Ollie Gordon, but it turned out to be yet another disappointing showing from the much-too-predictable offense to close the regular season. Therefore, the report card, as you might expect after a loss, is not very pretty.

When you can hold a team three games below .500 to only 24 points in a game, you can . . . typically . . . take that W home. Alas. OSU’s offense was so inept that not even the defense standing tall was enough of an aid to help the Pokes to victory.

The creativity is where things get off the rails. A tip-of-the-cap is in order for OSU getting at least one running back going — true freshman Ollie Gordon went for 136 yards on 17 attempts — but five of OSU’s 15 offensive possessions ended in either negative yardage or less than 10 yards. Another two of them went for fewer than 20 yards.

When half your possessions are going nowhere that’s a pretty big indictment that, uh, something ain’t working. (Four of those possessions were three-and-out.)

To give OSU some benefit of the doubt — of which it deserves very little — the offensive line injuries have stacked up in a way that has made scheming and game-planning more difficult than usual. Mike Gundy said last week they’re playing musical chairs up front. But Kasey Dunn and his play-calling have been not great, bordering on bad for most of the last month. Only fitting that the regular season ended in a stink bomb.

I thought Mike Gundy handed out a pretty fair assessment of OSU’s true freshman QB postgame — he complimented his competitive nature while ceding that he didn’t play a perfect game — which is about what I think anyone could reasonably expect from a true freshman making his second career start in a downpour on the end of one of the most disappointing seasons in recent memory.

Rangel finished 18 of 42 passing for 178 yards, so he didn’t set the world on fire. But he made some big boy throws down the field and showed off the arm talent that I think generally projects very well for him moving forward. I’m not sure he’s locked down the starting role if or when Spencer Sanders moves on, that’s probably a discussion for another day, but folks around Stillwater have been quietly very bullish on his prospects the last few months and it has been nice to see some of his talents on the field. Methinks he has star potential. Call me crazy.

As it turns out, OSU’s highest-rated recruit in the running back room is, like, by far, also its most talented rusher.

Gordon, a true freshman, went for 136 yards and a tuddy on Saturday, the most in a single game by an OSU rusher all season. Even with a banged-up line opening holes for him he looked like a star. If there was one positive to take from the game it’s that Gordon looks like the future for OSU at RB. Complete, total stud.

I was bullish on Cobb entering the season but even I didn’t quite fully expect the star turn we’ve seen from him this season. He’s been a star in the middle of OSU’s defense and his attitude and competitiveness is a difference-maker for that unit. Against West Virginia he tallied a team-high 11 sacks, one QB hurry and a team-high 1.5 tackles for loss. It tied for the second-most tackles for him in a game all season and validated his standing as one of the building blocks for OSU next season. Him and Kendal Daniels . . . my gosh, that’s a duo.

I do my best to be fair in this space but I think Gundy’s excuses the last month — which have more or less been the same excuse for OSU to end bad seasons, which is that it has had too many injuries — is starting to fall on deaf ears. Everyone this time of year is banged up. Good teams can withstand injury issues by recruiting better depth. OSU notoriously is an average team in the recruiting department within the Big 12. That has been exposed the last month.

“We just haven’t stayed healthy,” said Gundy on Saturday. “We don’t have enough guys to practice. It’s difficult to mix and match, and when you don’t have guys — I don’t know, somebody told me 22 first-game starters this year. Normal season we have six or seven. I would say that would be the biggest issue.”

Maybe this season is a bit aberrational in terms of the volume of injuries to starters — I’m open to hearing that side of the argument, and I think there’s something to it — but I don’t think OSU fans should accept that. It’s reasonable to expect more and better from this program. Gundy’s built a monster in Stillwater and not maintaining it appropriately is disappointing.