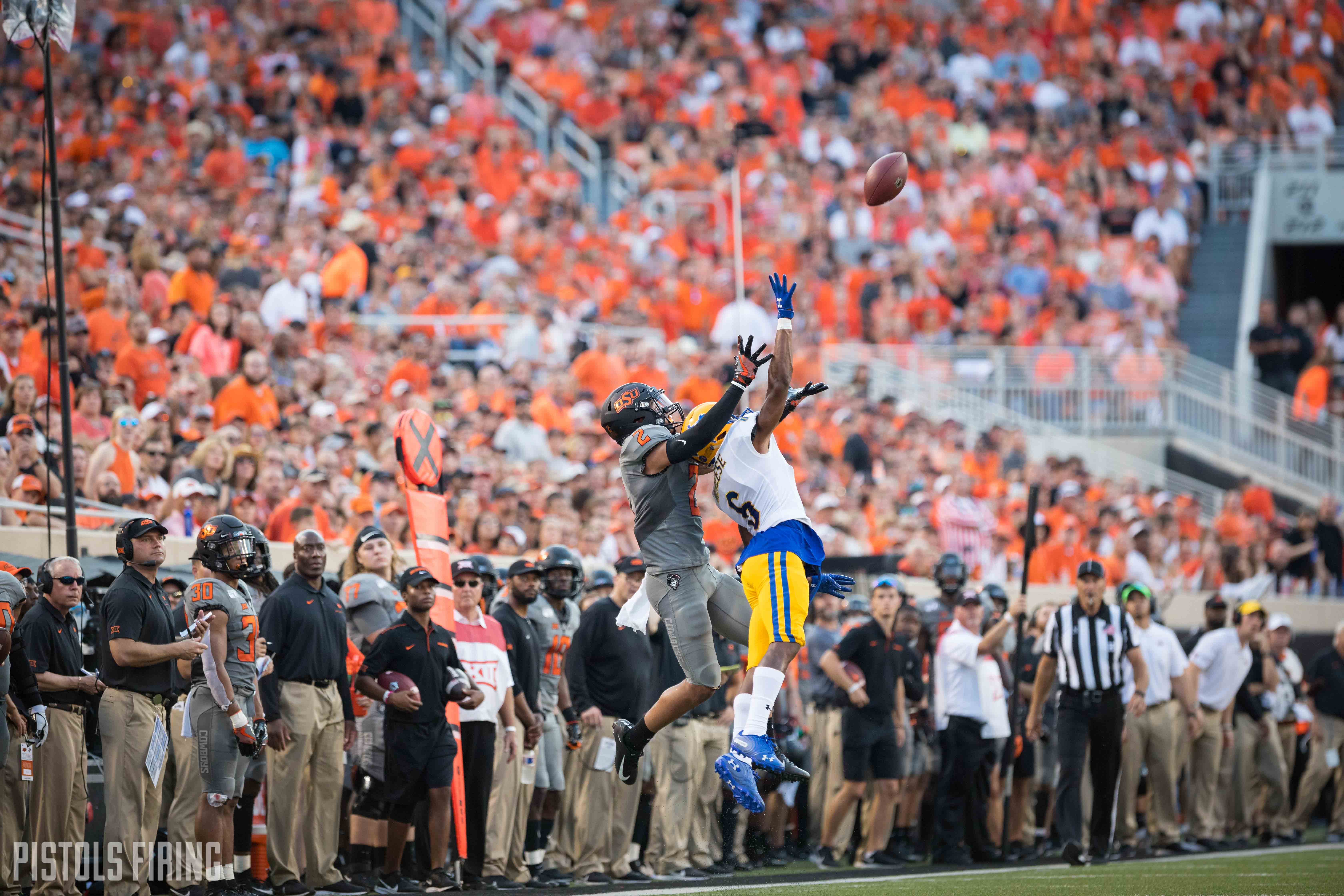 I thought Tylan Wallace might take a minor step back in his second season as the Cowboys’ top target, and through two games, that was a silly thought.

The Oklahoma State football team beat up on McNeese on Saturday in Boone Pickens Stadium, winning 56-14. It wasn’t the cleanest 42-point win, but there isn’t too much to complain about. Here are my grades from OSU’s Week 2 stomp.

Somehow Tylan Wallace seems to be outperforming what he did last season to this point.

Wallace had a career-best three touchdown performance against McNeese, doing so on only five catches.

Against Kansas last season, Wallace’s 56-yard reception was the longest of his career. Against the other Cowboys on Saturday, Wallace had touchdown catches of 69 and 75 yards, and most of those yards were him outrunning the McNeese secondary after the catch.

There aren’t many people walking this fine planet that can do this:

Wallace had only (???) 12 touchdown catches last season, and he is on pace to surpass that before October.

Through two games, Amen Ogbongbemiga and Malcolm Rodriguez have combined for 37 total tackles. For a pair that hasn’t had any linebacker starts at OSU entering 2019, that’s great.

Rodriguez had a team-best 11 tackles against McNeese, narrowly missing his personal best of 12 he put up in Bedlam last season.

After reaching double digits in tackles last week, Ogbongbemiga had seven stops against the other Cowboys, and he got his second sack in as many games.

Depth at the position was a question coming into the year, and still is now. Calvin Bundage has missed the first two games with a back injury, and Devin Harper hasn’t played with a lower body injury.

Kevin Henry got some run late against McNeese. It was also a good night for former walk-on Philip Redwine-Bryant. He got his first career interception and nearly housed it. Redwine-Bryant also finished third on the team in tackles with five behind Rodriguez and Ogbongbemiga.

I didn’t think Sanders had that great of a game, then I looked at the stats and realized he had 250 passing yards, 51 rushing yards and three touchdowns in two quarters and some change.

It wasn’t as flashy as it was against Oregon State, and that’s OK. He missed a few throws, and the Pokes’ offense didn’t start all that hot. But the results are there. It was his second game as a college quarterback, and he has 613 total yards, a 74-percent completion percentage, six touchdowns and no turnovers. You can definitely live with that.

It was a big recruiting weekend for OSU basketball with Cade Cunningham in town, and I couldn’t help but ponder if he was going to walk into a half empty Boone Pickens Stadium because of the FCS foe. But, it was a fairly good turnout.

It was a 55,509-person sellout. That’s 5,406 more than was in the Missouri State crowd to start last season. Sure, people started heading out as the game got more and more out of hand, and it wasn’t Texas or West Virginia levels of loud. But for a game against McNeese, not bad.

Being a punt returner is probably one of the toughest jobs in football with 11 guys running as fast as they can toward you while you’re looking up at a ball, but yeah, it wasn’t great. They didn’t drop anything, at least.