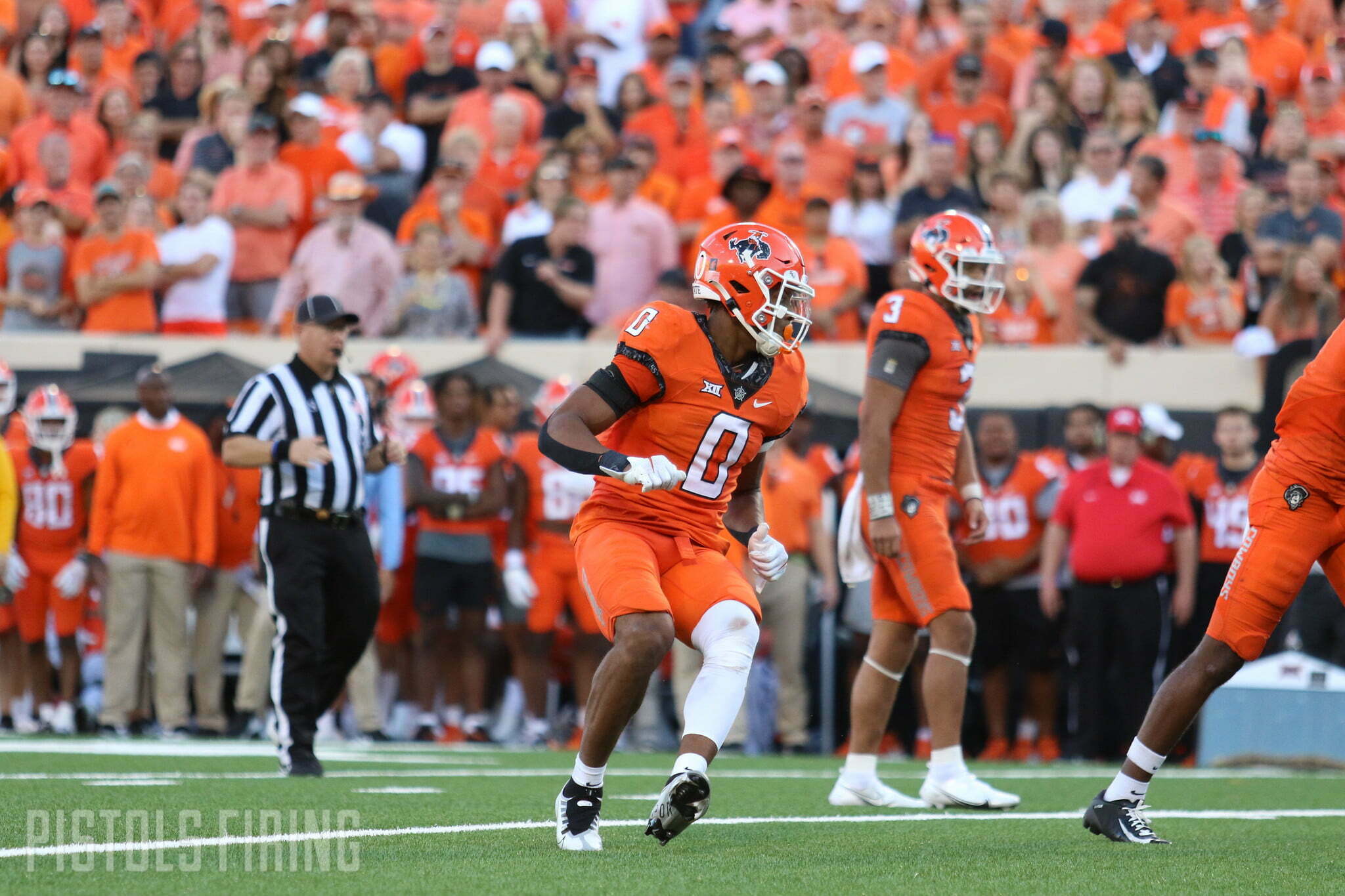 Once again it wasn’t necessarily pretty for Oklahoma State, but on Saturday, it once again mattered not! Oklahoma State out-uglied the burnt crisp orange visiting Texas Longhorns in a thriller, 41-34, coming from down as many as 14 points to send the Horns tail tucked headed back south,

Here are our grades for the game.

Welcome to the big time, Stephon Johnson Jr.! Or, as he is called around the locker room, “Boogie.” Boogie went and got down on Texas’ secondary in a big way. With no Jaden Bray, he stepped up and had the second-most receptions (tied with Brennan Presley with six) and the second-most receiving yards (90) in what was an out-of-nowhere star turn in a game OSU desperately needed him.

Johnson made easy catches across the field and tough catches he even made look easy. There was a clear connection between him and QB1 down the field and they consistently connected on 50/50 balls. Here’s a look at one on a drive where OSU marched all the way down the field. This drive ended in a pick in the end zone but was really the launching pad for him. Could see his confidence growing by the series after this.

“He made plays in this game,” said Gundy. “He played well today for a freshman. He’s played well in practice, but when you play freshman, you get concerned about them getting banged around, and then they’re freshmen. He played very very well. Didn’t let the game get too big for him.”

Johnson is a true freshman so it wasn’t clear entering the season how big, if any, his role would be. (He was the third-highest ranked WR signee in his class.) But it seems abundantly clear now that even if the WR corps gets to full strength he might be needed as a full-time player. He sinks perfectly into holes in the zone, runs crisp routes and has the physicality of a true alpha receiver. Big time talent who made big time plays on Saturday.

Discipline and toughness: A

OSU’s mantra this season is DAT — which stands for disciple and toughness — and OSU probably won this game because of DAT.

“That’s the difference in the game right there,” said Mike Gundy postgame.

Bijan Robinson had 140 yards rushing. Roschon Johnson had 73. As a team, Texas came out averaging 6.4 yards per carry. Not good! But a lot of that damage was done out of the gate. In the second half, OSU’s coaching staff clearly tweaked some things to counter Texas’ counter, and it seemed to work.

“We weren’t playing it right,” said Gundy. “We adjusted it, players understood it. Part of this game was making changes, absorbing it, putting it out there on the field.”

I’m not sure Spencer Sanders is the best quarterback in OSU football history, but I am pretty darn sure that he might be my No. 1 Foxhole guy. The guy when the chips are down, I want running the show. Spencer Sanders was a dawg in big spots all day. Picking up first downs with his legs. Dropping dimes when it was needed. It has taken a few years, but he has matured to meet the moment as a senior who has a firm grasp of the offense and the confidence to match. Finished with two touchdowns and a whopping 391 yards passing to go with 43 yards rushing.

“He’s the quarterback. When your quarterback is a very competitive player who is willing to give his body up, play injured, that makes my job easier. If your best players are your toughest and most competitive players, coaches don’t have to do much. That’s what you get from him.”

OSU earlier in the week suggested it would get Jaden Nixon and Ollie Gordon more involved in the running game moving forward because of late, it had stagnated. And boy oh boy did they — and triple oh boy did it pay off!

Nixon brought the juice when he got his chances. He earned eight carries but made the most of them, tallying 64 yards that included one 51-yard scamper. Gordon only got four touches for 13 yards but he did get two receptions which he turned to 28 yards.

It seems the by-committee approach at RB is likely here to stay, and that should be a good thing for OSU. More Nixon = more speed, more Gordon = more pass-catching and elusiveness, more Richardson = more of everything. This can be a really good backfield when deployed properly.

Look, I’m not an ageist, I promise, I’m just saying . . . Gundy’s dancing days are getting a tad more predictable than the olden days. Little more stiff. Little more arm movement than hip movement. It happens! He’s 55! Honestly it’s impressive he can still get down. I’m just not going to pretend that his dancing skills haven’t declined a bit. Here’s his get-down after the win.

Look, somebody has to say it: that’s a lot of shoulder action. Like, my uncle who had two hip replacement level shoulder action. It’s like the chicken dance and the wobble made a baby and formed Gundy’s new moves. The vibes are 100% immaculate, so of course it gets a passing grade, but if I can’t critique his coaching — it was an obvious A on Saturday — then I’ve got to nitpick somewhere.