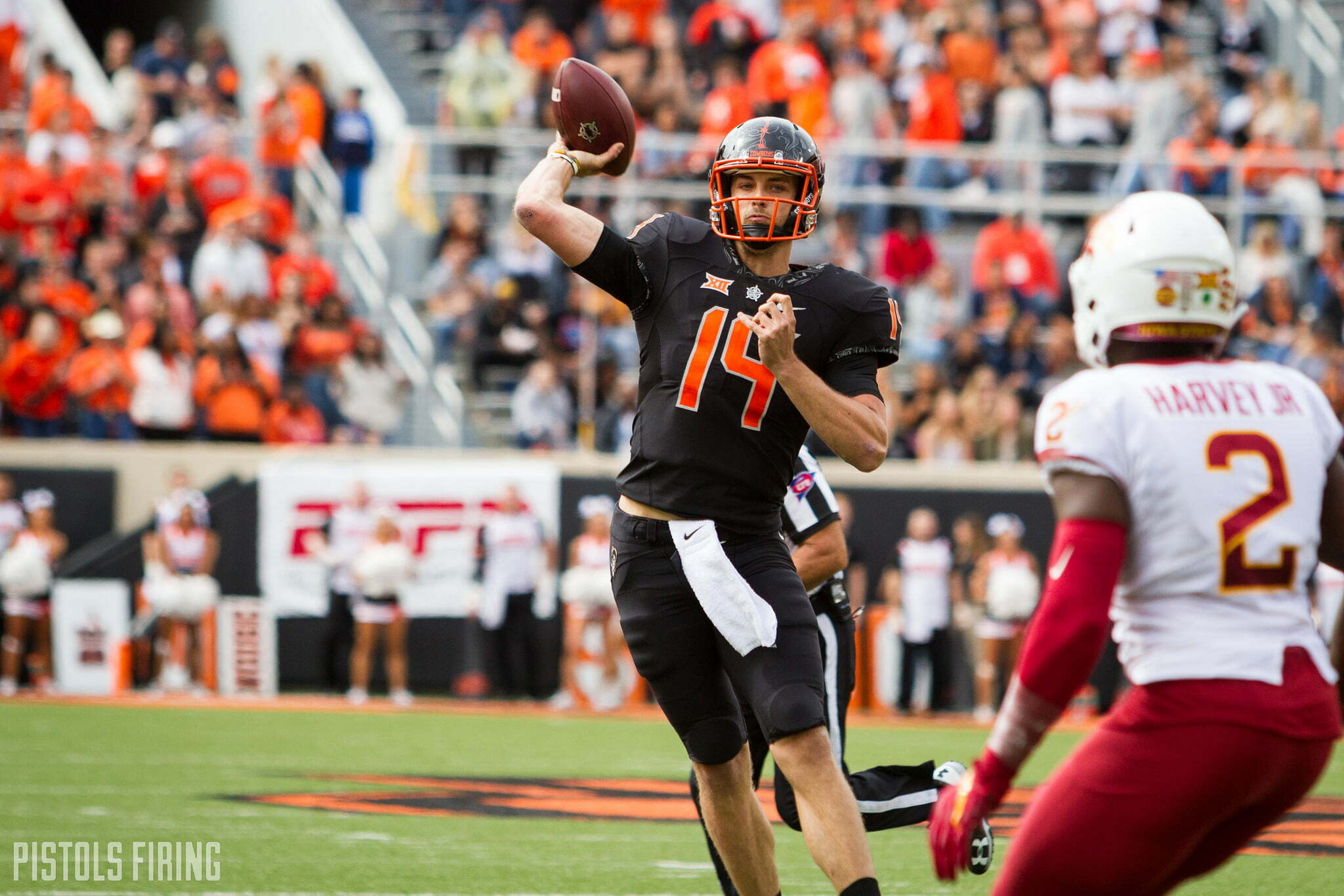 In case you haven’t heard, Taylor Cornelius is a former walk-on who waited his turn for four years.

Quarterback is the most controversial position in football, and at Oklahoma State this season, it was no different. With a highly touted freshman and a grad transfer with two seasons of FBS experience on the roster, Cornelius’ system experience won him the “contest.” Statistically, Cornelius had one of the best season’s in OSU’s history, but those numbers come into question when a program used to winning 10 games a year wins only six before a bowl game. Here are my season grades for Taylor Cornelius.

Taylor “Big Contest Corn” Cornelius had a 17-2 touchdown to turnover ratio against ranked opponents this season.

The Cowboys were a 2-point conversion away from being unbeaten against ranked teams, and Cornelius was great in those games.

Cornelius completed 64 percent of his passes against ranked foes, while averaging about 392.75 yards, 4.25 touchdowns and .5 turnovers a game. If he played at an independent school that played only ranked teams, he might have won the Heisman.

Somehow, OSU’s only conference victories this season were against then-No. 6 Texas, then-No. 9 West Virginia and Kansas.

The Cowboys consistent amount of success in the Mike Gundy era is because OSU consistently beat the Big 12  bottom feeders. After seemingly every OSU loss this year, there was a  broken winning streak, and against what in the past were expected wins, Cornelius wasn’t at his best.

Against unranked Big 12 teams, completed fewer than 50 percent of his passes three times, and he had seven turnovers in the six games. Those teams finished the regular season with a combined 32-39 record — five of those wins came against OSU, and only one of those loses came from OSU, so adjusting the record to not include OSU games, those teams are 27-38.

Cornelius isn’t quite Lamar Jackson, but he did finish with the most rushing touchdowns of any Cowboy after the regular season.

Justice Hill missing most of the Oklahoma game and the past two games definitely  contributed to Cornelius getting that accolade, but given how much depth at running back had at the beginning of the season, I wouldn’t have ever put money on Cornelius ending with the most touchdowns. Cornelius finished with 385 rushing yards and 10 touchdowns this year. That yardage total is hampered by the yards he lost in sacks this season.

Cornelius showed glimpses of his wheels last season, particularly on his 40-yard touchdown run against Baylor. This year, he led the Cowboys in rushing in two games. His most remembered rushing performances will be his big runs in a two rushing touchdown performance against Texas, and the 106 yards he ran for against West Virginia.

In my opinion, his most impressive run of the season was his game-icing first down scamper against Texas.

When everyone in the stadium knew the Cowboys were going to run, Cornelius kept on a zone read instead of giving to superstar Justice Hill, and it worked.

While Cornelius had the third most touchdown passes in the Big 12, he has the most interceptions.

Cornelius’ 11 picks this year is tied for 12th in the country. High interception numbers are a consequence of OSU’s play style, so it’s hard to harp too hard on Cornelius for it, but these picks against West Virginia weren’t good looks.

At least quarterbacks threw all of OSU’s interceptions this year.

Grading Cornelius is tough and has been all season. There weren’t incredibly high expectations for him, sometimes he blew them out of the water, and sometimes he proved why expectations weren’t high. I think it’s unfair to put the Cowboys’ down year solely on Cornelius.

He replaced arguably the best quarterback in OSU’s history and with a game left, Cornelius’ season trails only Mason Rudolph and Brandon Weeden in passing yards, completions and attempts. His 28 passing touchdowns match Rudolph’s junior season at fifth in an OSU season.

Cornelius’ 38 touchdowns responsible for trail only Rudolph’s senior season (47) and Barry Sanders’ Heisman-winning year (44). It seems like the only stat Cornelius didn’t put up big numbers in is wins, but that is a big deal.