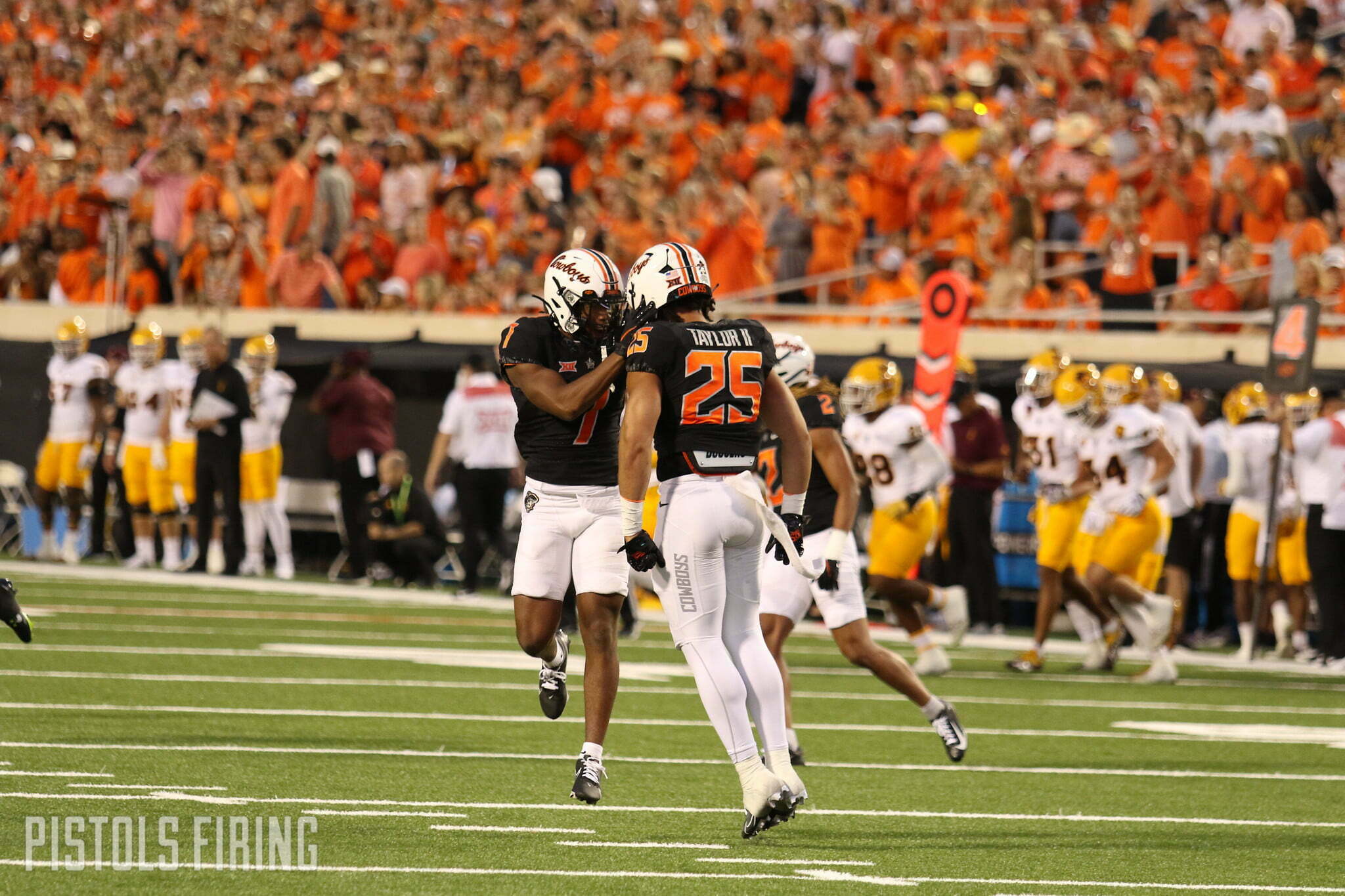 The defense had some lapses. The offense looked stagnant early on. But OSU after a slow start managed to finish fast, ousting a good Arizona State team on Saturday night 34-17 to improve to 2-0 on the season.

Here is the report card from Week 2.

The final stat line — 21 of 38 passing for two scores, 268 yards passing, 54 yards rushing and a rushing TD with only one INT — doesn’t totally do justice to just how solid QB1 was once again on Saturday. The ugly pick and the lower-than-usual completion percentage are the only two real knocks here. His ability to extend plays with his legs is a dynamic that completely opens up OSU’s offense. Dominic Richardson led the team in rushing (more on him in a bit) but Sanders, I’d argue, was the team’s most important and clutch ball-carrier on the evening.

I handed out an A for the offense when it scored 58 points last week against Central Michigan, so I feel like I’ve got to be a bit more harsh here. The final box score looks good, sure, but out of the gates it was tough sledding. The Cowboys were held scoreless in the first quarter (and didn’t put points on the board until the 8:28 mark of the second quarter). It was the first time since Nov. 6 of last season that the offense was held scoreless in the first quarter.

Against Central Michigan, OSU rushed (as a team) for 125 yards, with Richardson’s 61 leading the way in a mostly uninspiring performance on the ground. That was not the case Saturday. Richardson rumbled his way — literally — to a whopping 131 yards on the ground on 27 carries, with his hard-nose running style completely flipping momentum in favor of OSU on several occasions. He has always ran the ball angry (Chris Carson style) but hasn’t always gotten bell-cow work. He delivered on his touches in a big way Saturday, entrenching himself even further as the RB1 on this team. As for RB2. . . .

Ollie Gordon excitement levels: Out of this world

I can’t even hand out a grade on this one I’m so excited. Ollie Gordon, a three-star (!!!) running back who is a freshman (!!!), looks unbelievable. (Side note: he was a four-star in the Composite rankings. But still!) He had three carries for nine yards on the day and one reception for 14 yards (that went to the house), and they were the four most exciting touches I think I saw all day. He just . . . looks different. There was one play in particular where it looked like he was about to be stopped for a loss, only to emerge out of nowhere that really stood out. Oh, and the TD looked great, too.

With Deondre Jackson still working through transcript issues and Jaden Nixon not really in the mix (he’s a huge part of special teams right now), it seems Gordon is on a trajectory to potentially solidify himself indefinitely as the clear No. 2 in this committee backfield.

CMU quarterback Daniel Richardson threw for a career-high last week. So limiting former five-star QB Emory Jones on Saturday to only 223 yards passing feels like it should be a win. That said . . . he got all of those yards on only 12 completed passes, in part because there were some significant miscommunications in the defensive secondary that really paved the way for chunk plays. This unit really has some strong moments but the secondary in particular has been susceptible to giving up big plays. This position group was very good at doing that under Jim Knowles but has been a little inconsistent thus far under Derek Mason.

OSU’s defensive line was solid last week, recording 13 tackles for loss (and weirdly only two sacks). On Saturday, though, some positive regression hit, with OSU recording three sacks and 10 (!!) quarterback hurries. Trace Ford was pushing grown men into their own quarterback. Collin Oliver was doing damage. Brock Martin was chasing the quarterback. Tyler Lacy was out there looking like a first-round talent. This defensive line is so incredibly good.

It felt like at one point in the first half that Arizona State should have been up by two touchdowns, but the OSU defense mastered the bend-don’t-break technique to surrender just 17 points on the entire night. Sure, some chunk plays here and there, but three points allowed the entire first half was both beautifully done and incredibly clutch with OSU’s offense starting slow. I think it’s probably easy to hit the “I miss Jim Knowles so bad!” button when the defense is out of position on a play but that was overall a really solid showing for OSU on defense. If they can cut out some of the miscommunications I’m pretty optimistic that all the folks bagging on OSU’s defense in Week 1 will wind up looking foolish in short order.