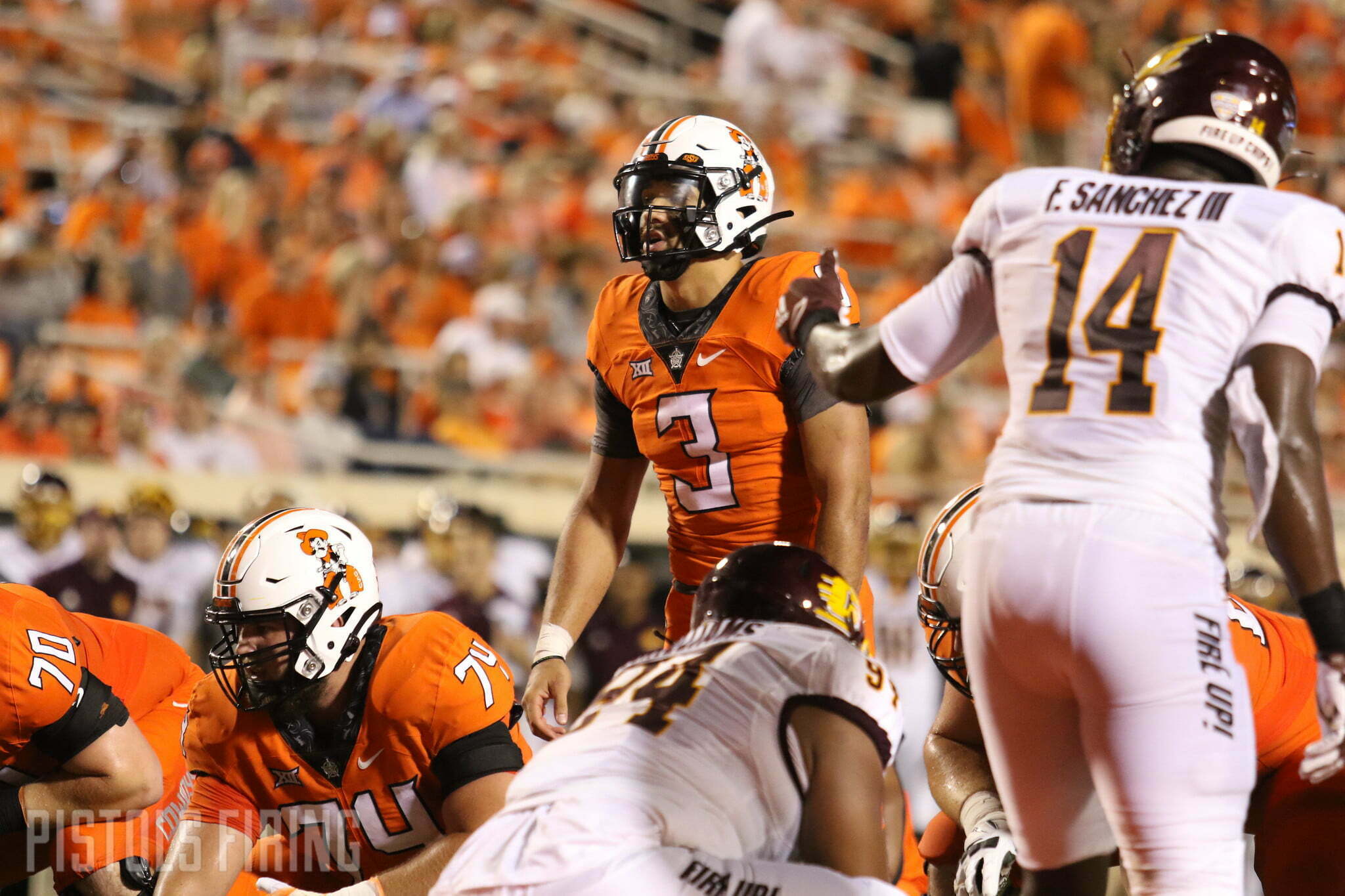 Oklahoma State scooted past Central Michigan on Thursday night in a wire-to-wire 58-44 win, and yet, weirdly, it felt a bit like a rollercoaster game from the Cowboys in their season-opener. They hit the turbo button on offense early and the defense mostly looked sound, but CMU made things mildly interesting with a big second half to make the final score look a little closer than it probably should have been.

So what to make of it?

Marshall laid out his 10 Thoughts on the game here. I’ve got my own assessment via the first progress report of the season.

There was one, maybe two passes on Thursday where Spencer Sanders wasn’t completely zeroed in and crisp on his target. But it’s hard to argue he was anything other than sensational. He finished 28-of-41 passing for 406 yards through the air and four scores, adding for good measure 11 rushes for 57 yards rushing and two rushing scores. He became just the second player in Big 12 history to have 300 passing yards, three passing touchdowns and two rushing touchdowns in a half with his first half performance, something that only Patrick Mahomes (!) ever accomplished.

Last season it frequently felt like the defense was the anchor of the team and the offense was just trying to keep a good-enough pace to not lose games. It felt quite the opposite Thursday. OSU scored 58 points in the win, 44 of which came in the first half, and it could easily have been 70+ if Kasey Dunn really had kept his foot on the gas in the second half. You could maybe nitpick the rushing game, but the offensive line was rock solid, the passing game was spectacular and the offense as a whole was basically scoring when it wanted.

OSU’s 32-year-old punter Tom Hutton went viral on social media thanks to a graphic on FS1 that advertised him as the oldest active FBS player — which, OK, I get it, it’s funny — but age jokes aside, he was quietly terrific. Hutton consistently pinned CMU deep in its own territory, and once even sent down a missile that the Chippewas nearly muffed and gave back. It’s been awhile since OSU has had a true difference-maker at the punter spot, but Hutton has improved each year at OSU and showed some really nice stuff in terms of placement punting that could really bode well for OSU’s special teams this season.

Central Michigan pretty clearly had one game plan entering Thursday: dare OSU to throw and try to stop the run. That led to a huge Spencer Sanders game through the air, obviously, but OSU was still able to at least get some production on the ground, too. As a team it amassed 125 yards rushing on 32 attempts (3.9 yards per carry). Dominic Richardson led the way with nine totes for 61 yards and a score, but Sanders actually had the most attempts (11 for 57). Pretty solid on the whole. The run game doesn’t feel like it’ll be a strength in the same way it was last season with Jaylen Warren, but it does feel like Sanders’ ability to make plays with his legs will keep OSU productive no matter what.

CMU quarterback Daniel Richardson threw for 424 yards and four scores, so it’s hard to be too terribly kind in grading the secondary. There were numerous busts and miscommunications on the back end, several times at the linebacker position, that cost OSU points and allowed CMU to accumulate chunk yardage. There were definitely some encouraging moments and some star players — Kendal Daniels, the former four-star recruit, had 11 tackles, a TFL and an INT in his first game with extended work — but on the whole it was probably just-OK secondary play. (We have high standards after last year, but I do think some of the numbers OSU gave up was a bit inflated by garbage time.)

So uh … this is clearly going to be the strength of the OSU defense this season. With an experienced defensive line, OSU held Lew Nichols, who led the nation in rushing yards last season, to just 2.8 yards per carry on a whopping 26 attempts. Two sacks on the night wasn’t a huge stat, but the 13 (!) tackles for loss really jumps off the page. This team will create pressure all season and has the personnel to do it in a number of different and dangerous ways.

New OSU defensive coordinator Derek Mason was asked postgame to grade his unit’s performance and handed out a C for his D. So who am I to question Derek Mason? I think that’s a pretty fair assessment if not a tad critical. The 44 points surrendered doesn’t look particularly great on paper, and the secondary had some suspect moments, but when the defense was really locked in and the game had juice, there weren’t many moments where I felt like the defense dropped the rope. Some bad moments, some good moments, and obviously some teaching moments. But not ready to be more critical than C — yet.