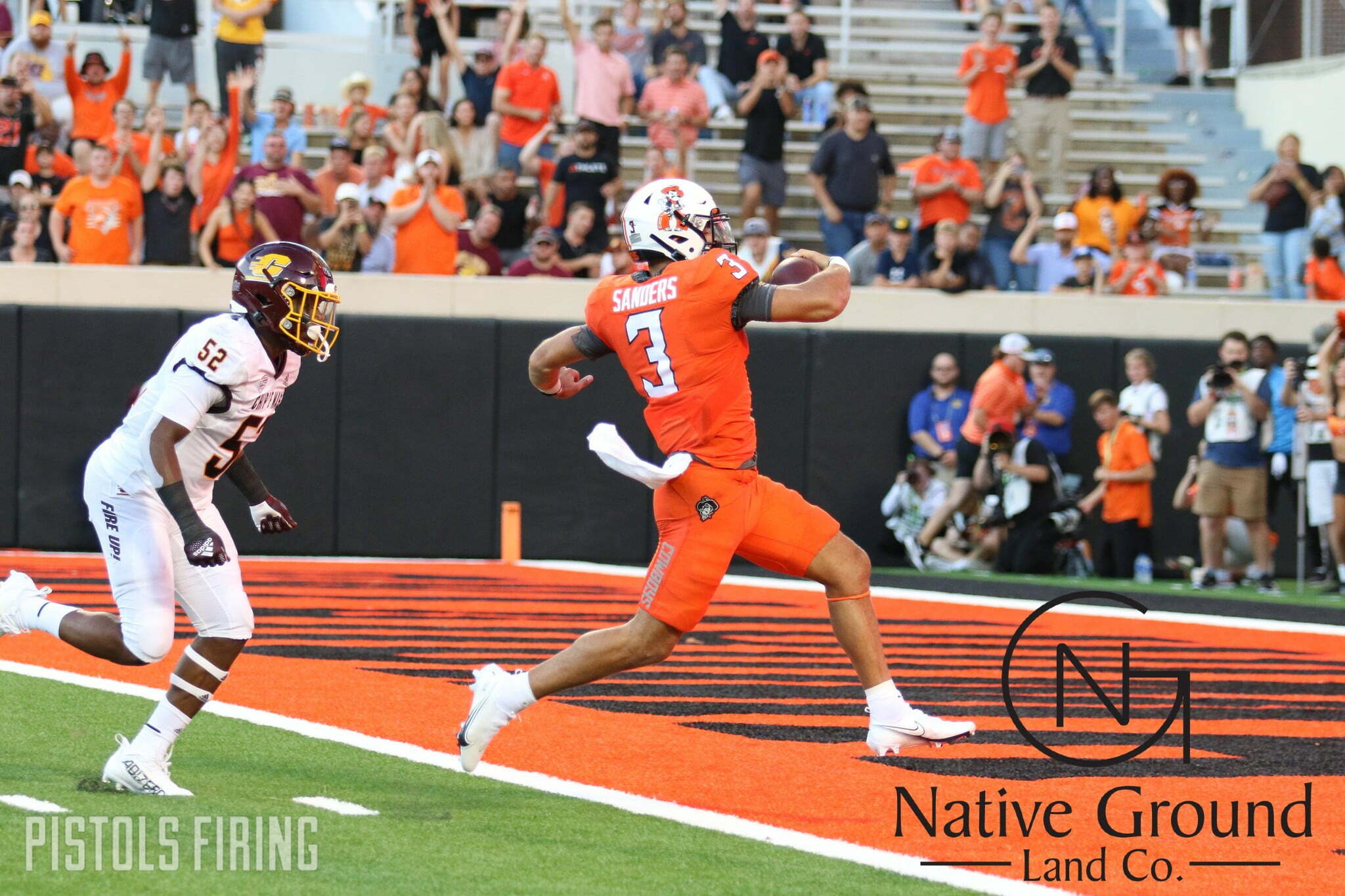 STILLWATER — The Cowboy offense took at trip back to run-and-shoot days of the Big 12 on Thursday night, but unfortunately for the Pokes, the defense did something similar.

Oklahoma State defeated Central Michigan 58-44 in Boone Pickens Stadium to start the 2022 season. Here are 10 Thoughts from the game.

But first, 10 Thoughts is sponsored this season by Native Ground Land Company, and we’re thrilled about it.

On more than one occasion this offseason, Mike Gundy called Spencer Sanders a “magician.” Well, hocus pocus, he was fun to watch Thursday night.

Sanders finished 28-for-41 for 406 passing yards (a career-high), four passing touchdowns, 57 rushing yards and two rushing touchdowns. In the first half alone, he had 362 total yards and five scores.

He joins Patrick Mahomes (decent company) as the only players in Big 12 history with 300 passing yards, three passing touchdowns and two rushing touchdowns in a single half (credit to ESPN on finding that).

This is the Sanders OSU fans dreamed about when he committed to the Cowboys way back in 2016. It’s hard to say that this is the Spencer Sanders OSU will get all season because, one, if he did this all year he’d be the best quarterback in football history, and two, there are a lot of data points scattered throughout the past three years to suggest the performance level will dip at some point.

But, the ceiling for Sanders has raised. If the floor also raised, watch out for the Cowboys in 2022.

2. Not Great Defense Kinda Sucked the Celebration Out of Stillwater

A couple things contribute to this. To start, this defense just isn’t as good as last season’s. How could it be? The Cowboys were experienced all over the place, and entering 2022 the Cowboys have to break in two new starters at linebacker and four in the secondary.

Then there is time of possession. Central Michigan had the ball for 36:08. OSU had the ball for 23:52 (9:12 of which came in the fourth quarter). That’s almost the opposite of every game last year where the Cowboys would manage games offensively and win with defense. Fatigue seemed to be a factor late, especially when it came to tackling.

CMU quarterback Daniel Richardson finished the game 36-for-49 with 424 yards and four touchdowns. That’s a heck of a game considering that for most of it, the Chippewas were getting run back to MAC country.

There’s no way the Cowboys’ defense is going to be as good as last season’s, but that still seemed underwhelming.

“You scratch where it itches,” OSU defensive coordinator Derek Mason said. “You generally see the same things week to week. We gotta fix what needs to be fixed because that’s what teams will attack. Arizona State is going to look and see how they can get the ball out fast and do some of the same things we saw from Central Michigan. Gotta have answers, so here we go.”

After years of injury-ravaged offensive lines and young receivers, Kasey Dunn has been unleashed.

Last year the Cowboys played controlled offense and won games with defense, but Thursday night Dunn got to run an autobahn offense — no speed limit.

Oklahoma State had seven touchdowns drives that lasted less than two minutes, including three that were under a minute.

The best example of OSU’s speed came at the end of the first half. With a 37-15 lead at 43 seconds left in the half, OSU teams of the past few years would’ve run out the clock. And it looked like that’s what OSU was trying to do — but then Dominic Richardson reeled off an 18-yard run. Spencer Sanders promptly got the Cowboys back on the line. The foot was back on the gas. A 42-yard pass, back-to-back CMU penalties and a Richardson rushing score ended a three-play, 75-yard drive that lasted 32 seconds.

“We’ve always wanted to be pedal to the metal,” Sanders said. “Possibly in the past, a lot of that has to do with my mistakes and my decision-making. I’m glad in this game, we were pretty good on offense. We were pretty solid. We didn’t have any [missed assignments]. We moved the ball.”

Gundy has always said that Spencer Sanders has played well when his offensive line has given him time. He had time Thursday.

The Cowboys went with a starting offensive line of:

Jason Brooks and Joe Michalski also got some run with Brooks playing at right tackle and Michalski playing at guard.

Sanders was sacked once Thursday and hurried another time. After years of Sanders “running for his life,” the Cowboys will take that.

If there was a point of worry for this offensive that scored 58 points, it’d be running back production.

OSU running backs combined for 17 carries and 67 yards. The per-carry average got a late boost to 3.9 with Dominic Richardson ripping off fourth-quarter runs of 12 and 14 yards.

Here is how the game’s carries were divided:

Only 17 carries among the running backs isn’t a lot, which is maybe why it seems they weren’t all that impactful. And with Sanders cooking, the Pokes didn’t really need to put the ball in anyone else’s hands. Gundy said that the Cowboys did a good job in pass protection, but — without watching the tape — he felt they could’ve done a better job run blocking.

After missing nearly all of last season, Braydon Johnson returned in a big way — six catches for 133 yards and a score.

Manning OSU’s Z position (the James Washington/Tylan Wallace/Tay Martin position), the speedy Johnson had catches of 41, 28 and 45 yards. It’s the most yards and most receptions he has had in a game in his career.

After missing so much time, it was a wonder what he’d look like in his return (and a return to a position that has been so prominent for OSU over the years), but he passed the test against CMU.

He put some funky spin on his first punt of the day — so funky the returner misjudged it and had it bonk off his helmet. Then punt No. 2 got downed on the 1-yard line, and OSU forced a safety on the next play.

The TV broadcast proclaimed Hutton, 32, as the oldest player in the country, but if he can keep wreaking havoc like he did against the Chippewas, it doesn’t matter if he is 80.

8. Good Schemes from the Chips

OSU, the team that led the nation in sacks last season, brought down Daniel Richardson only twice Thursday despite Richardson throwing 49 times.

It was a good gameplan from CMU to get the ball out of Richardson’s hands quickly, putting the pressure on the Cowboys’ inexperienced secondary and taking those terrifying edge rushers out of the game. As OSU DC Derek Mason said above, now that teams have seen that, they’ll try something similar against the Pokes. Now it’s Mason’s and the defense’s job to adjust.

9. Mason Cobb, a Tackler of Men

In OSU’s first defensive series, it looked like no Malcolm Rodriguez, no Devin Harper, no problem because Mason Cobb was everywhere.

Cobb had three tackles the first time the Chippewas had the ball and made two of them for loss. He finished with 10 takedowns (tied for a team-high with Kendal Daniels) with 2.5 tackles for loss.

It wasn’t the perfect defensive performance from OSU, but Cobb showed he has the ability to help fill that hole in 2022.

Before Gundy, OSU’s last 150 wins were sprawled out over a 26-year period, spanning the entire tenures of Jimmy Johnson, Pat Jones, Bob Simmons and Les Miles. Gundy did it in 17 seasons plus one game. Gundy’s winning percentage bumps up to .685, which trails only Pappy Waldorf who was 34-10-7. That amounts to a .735 winning percentage because ties count as half-wins (sort of un-American if you ask me).

He is the GOAT in OSU football coaching, and it’s not necessarily close.

“Like I told the team, it takes a lot of really, really quality people and good young men for a guy to stay in one place long enough to win 150 games,” Gundy said. “I’m just lucky enough to be along for the ride. That’s pretty cool.”