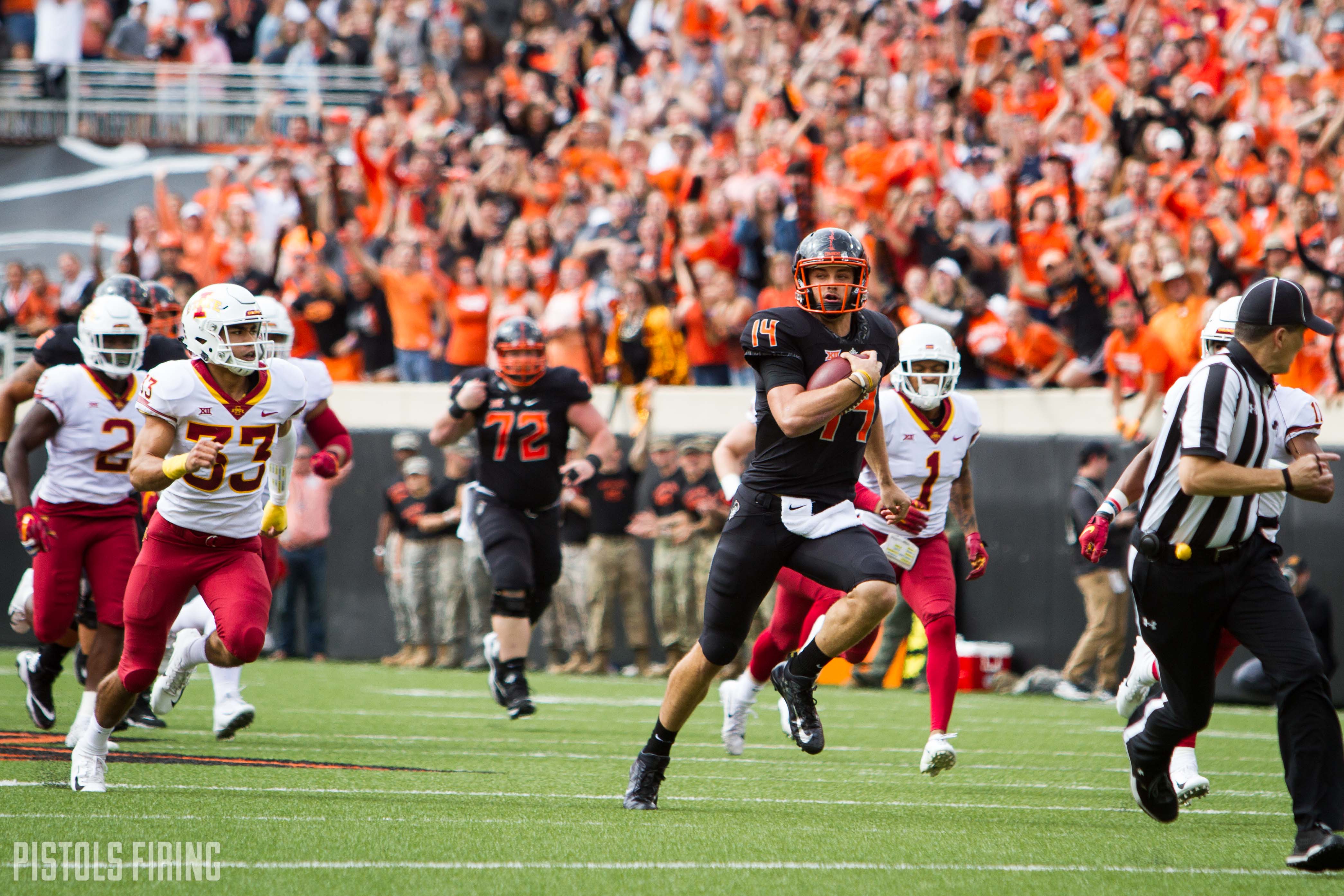 As Oklahoma State watched Iowa State snap the ball in the waning moments of the fourth quarter on Saturday evening, fate was already decided. Between the opening kick and the first three quarters, it was evident the Cyclones were the better team. They’d earned a comfortable lead, too. Even on the road as a double-digit underdog, ISU’s win probability hovered at or above 50 percent for much of the second half.

There are myriad reasons why this outcome was decided before it was officially decided.

OSU raked itself over the coals with penalties, for one; The Cowboys rank 100th in the NCAA in penalty yardage per game after Week 6. Brock Purdy looked like a handsome John Elway, for two. He had his success throwing downfield, but his ability to run was an unexpected wrinkle that significantly changed the dynamic of the game. And OSU’s defense was no more than a flimsy doggie door for an Iowa State offense that, up until Saturday, had moved as well as a fat three-legged weenie dog. That’s three.

It allowed seven sacks during the contest – one more than the ISU team had through four games combined this season.

These are not new deficiencies. Special teams – which again is a sore spot – was, again, a sore spot. OSU’s offensive line hasn’t been a great unit since … 2013 (?). And OSU’s defense, its woefully big-play-susceptible defense, looked about on par with an average Glenn Spencer-led crew.

Problem now is that these issues have been, by-and-large, masked by above average quarterback play. It’s been a trademark tracing back to the early Mason Rudolph days. When OSU would dig itself into a hole – take Iowa State last season, for instance – Rudolph would kick it into another gear and the offense would hum its way to a win. Or take Pitt 2016 as another example: OSU was neck-and-neck with the Panthers, but Rudolph tossed for 300 (!) more yards than opposing QB Nathan Peterman to help seal the W.

That position alone can tip the scale significantly. Gundy has said as much on numerous occasions. But the way in which the scale leans isn’t favorable for OSU right now.

In the 2018 iteration of Oklahoma State, not only do you have below average special teams, below average blocking, and an average (at best) defense as OSU switches schemes and breaks in youngsters, you’ve also got what fair critics would label as an average starter at QB.

Cornelius is fine, and honestly, he might’ve been really good on the 2013 version of OSU or 2015 Bama or any iteration of Texas, for that matter. But let’s call a spade a spade: OSU’s team under Gundy, historically, is predicated on discipline, elite quarterback play and a dynamic offense. At least the successful teams have been. Without one, you can maybe overcome it, dependent upon which is missing. Without two, you’ve got some problems. Missing all three … well, the outcome is yet to be determined, but bowl eligibility might suddenly be a high goal.

It all goes back to quarterback play and building a sustainable program. Rudolph could hide deficiencies like a magic eraser. His performance, too, could mask some of the roots on which a program is built.

With the strength of the QB outweighing some of the talent disparity, those numbers are easier to swallow. But with the status quo, well, OSU is 4-2 overall, 1-2 in the Big 12, 0-2 in home conference games as double digit favorites.

What do those two have in common?

Both unleashed uber-talented freshman quarterbacks to overcome some of their talent disparity elsewhere.

If only Oklahoma State had the capability of doing something similar ?.