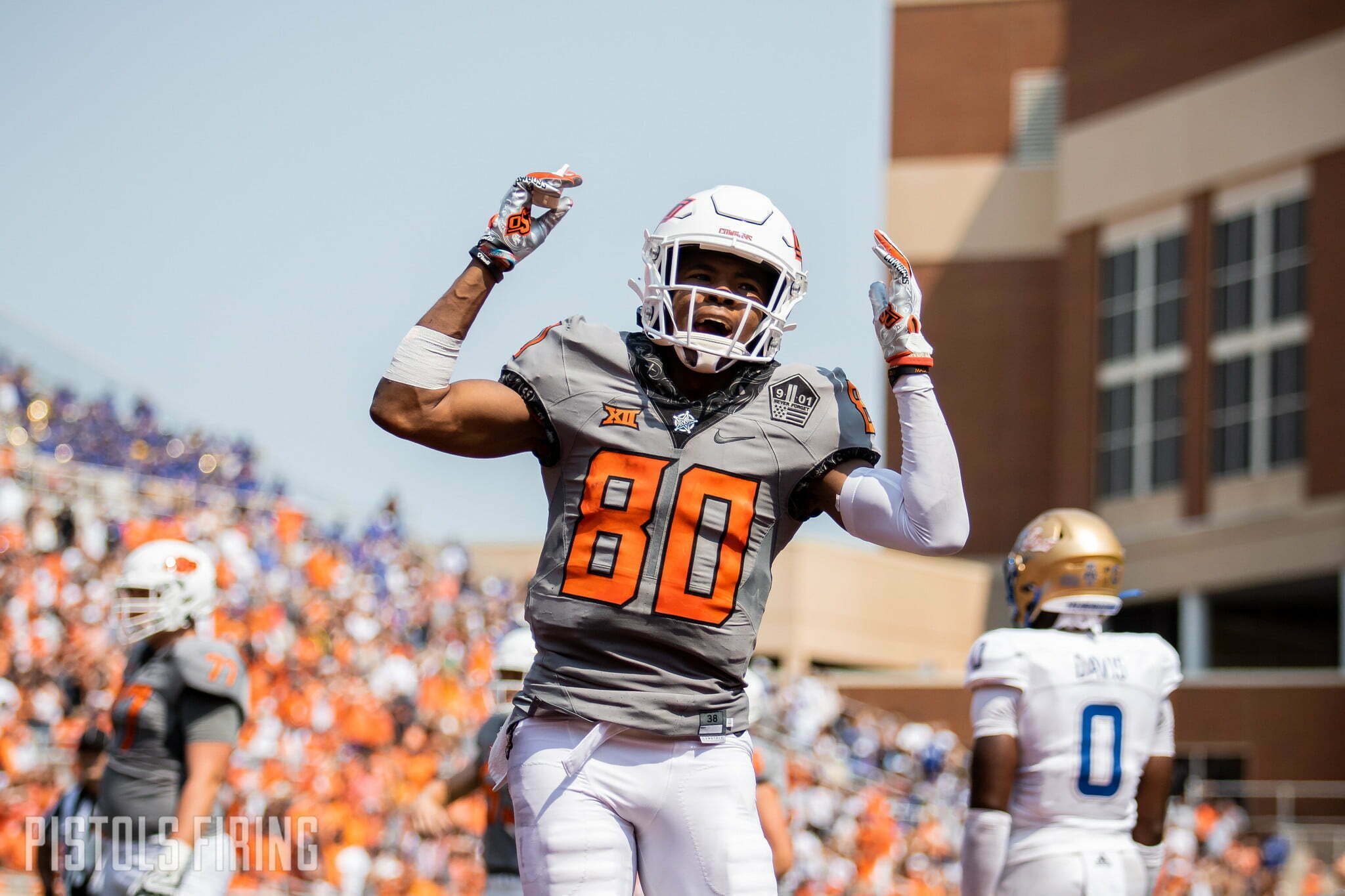 STILLWATER — The Cowboys’ receiving corps. was loaded with pros in 2017, and Mike Gundy thinks something similar can happen with the young group he was in town.

James Washington, Marcell Ateman, Chris Lacy and Tyron Johnson have all made NFL catches. Dillon Stoner and Tylan Wallace are entering their rookie seasons in the league, and Jalen McCleskey was on a similar track fighting for NFL snaps before an offseason injury. All of those guys shared receptions at Oklahoma State in 2017.

Similarly, the Cowboys have a new young core in its receivers room, that Gundy thinks can hit that level.

“I mentioned to you guys way back in August that we had some experience, and then behind them, I said we could be like we where years ago with that group that all played in the NFL,” Gundy said after OSU’s win against Tulsa. “Ateman and Washington and Stoner and Lacy and McCleskey and all those guys — these young guys can be like that, they’re just not ready right now.”

The new wave seems to start with sophomore Brennan Presley. In two games this season, Presley has eight receptions for 103 yards.

Three high school class of 2021 receivers have already made college catches two games into their freshman seasons. Jaden Bray has six catches for 136 yards (team lead) and a touchdown. Bryson Green has five catches for 57 yards and a touchdown. John Paul Richardson had two catches in Saturday’s win. Blaine Green, Bryson’s twin, will join that group when he returns from injury. The group also has highly touted Edmond Santa Fe standout Talyn Shettron joining it next season.

It’s fun because the group can do myriad things. Presley and Richardson are shifty slot guys who will also contribute in the return game.

Similar to Ateman, Bray has a long frame and isn’t afraid of making catches over smaller corners.

Bryson and Bray made their first career TD catches Saturday. Bray’s came in the second quarter when he got some separation over the middle and fought past two Tulsa defenders to scamper the remaining way into the end zone.

Bryson made a Tylan Wallace-esque contested catch in the end zone. Whether it was luck or skill, Green was able to put his right foot down in the orange of the Boone Pickens Stadium end zone before falling out of play.

Washington was impressive in his freshman season. In 2014, the future second round NFL Draft pick caught 28 passes for 456 yards and a team-leading six receiving touchdowns. Bray and Bryson, outside targets like Washington, are on a fairly good pace to put up similar numbers.

It’s incredibly early to be comparing the Cowboys youngsters to a handful of pros, but its an exciting part of a Cowboy offense that has been lackluster in 2021.