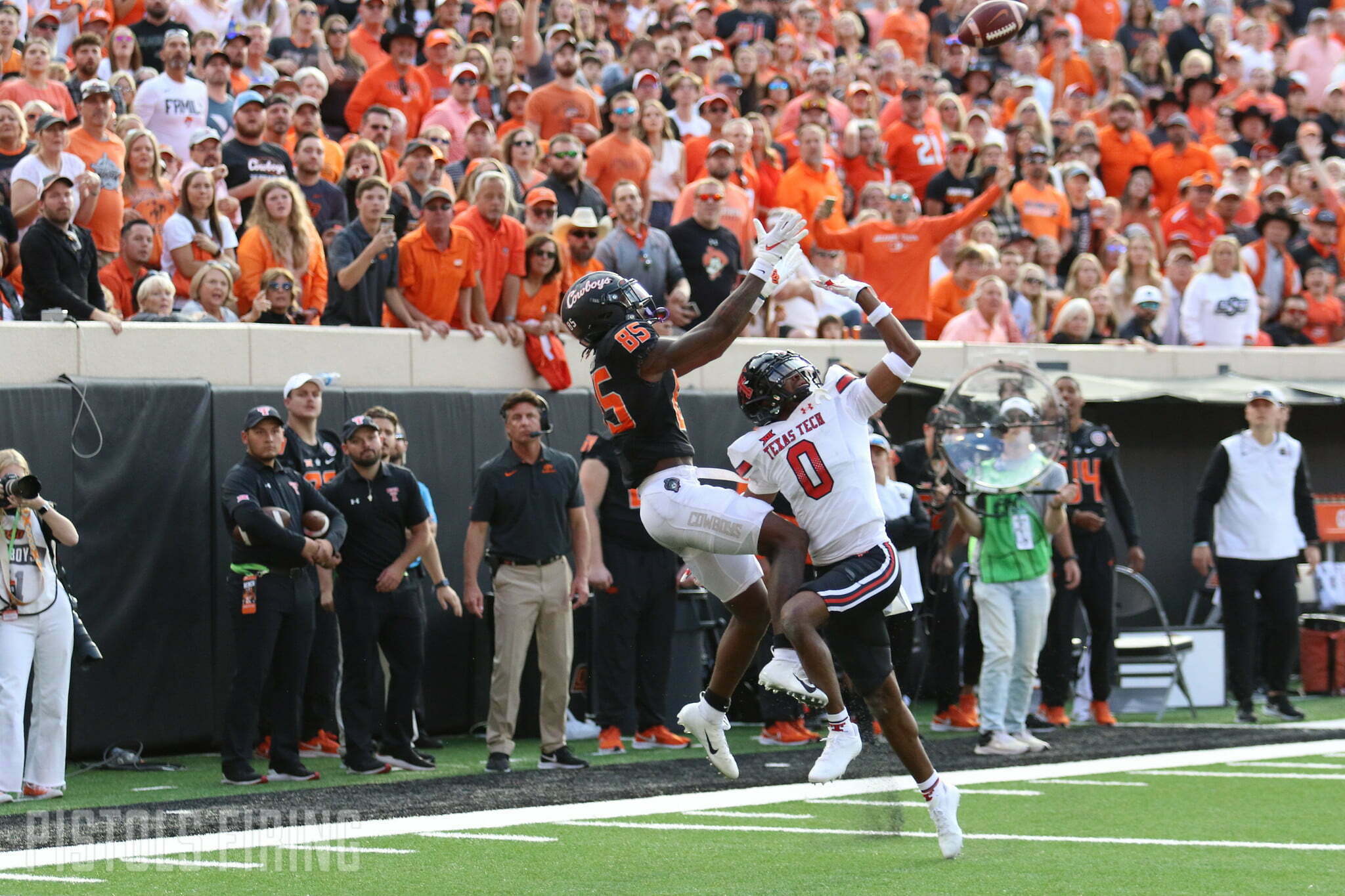 Jaden Bray may have looked a little rusty during Oklahoma State’s 41-31 win over Texas Tech, but it was important for Oklahoma State coaches to get him going.

Bray showed off his big-play ability during the first two weeks of his college career in 2021 before earning a starting spot over the last four games of the season. He made even more big plays in both the Cowboys’ Bedlam win, Big 12 Championship appearance and Fiesta Bowl win. Bray finished the year with 250 yards and two TDs. His 19.2-yard per-catch average led all Cowboys that caught more than one pass.

Those rookie sparks ignited some serious offseason buzz after Rob Glass and Co. added some mass to his frame. But that buzz was quelled a bit when Bray suffered a fall camp hand injury, which held him out of the first four games of the season.

After returning to practice the last two weeks, Bray finally made his 2022 debut against Texas Tech and the rust was apparent. But so was the coaching staff’s intent to knock off that rust.

Despite not starting, Bray drew eight targets from Spencer Sanders, second only to his former backup on the depth chart Bryson Green (Green had a career game, by the way). It was obvious that Sanders and Bray weren’t exactly synced up.

The pair didn’t connect on any of their first three attempts. On the fourth, Bray reeled in a catch at the Tech 5-yard line but didn’t gain any ground. Then on the fifth, Sanders went to Bray at the back of the end zone. He controlled the ball but was out of bounds before putting a cleat down.

After the game, OSU offensive coordinator and receivers coach Kasey Dunn seemed to think it was just a matter of Bray getting back into the swing of things.

“It’s probably a combination of both [getting up to speed and rust],” said Dunn. “You know, he ran by the guy a couple of times and he was open.” Dunn then mimicked a response from Gundy, apparently on one of those missed catches. Dunn’s response to his boss?

“Hell, I mean the kid’s open, you know. When you take a shot down the field things like that happen. It’s gotta be pinpoint. There were a couple of times when he tried to go back and highpoint. There was a couple that were a little bit longer and he couldn’t get there. He ran right by the dude, though, and those are fast corners. Long, fast corners. Right by him.

“So I don’t think he’s running slow, but it’s one of those things that it’s got to be executed to perfection for it to work out and you get so used to seeing it happen all the time for us, that when it doesn’t happen it’s a little bit of a shock and that’s kind of what happened tonight.”

In his own postgame press conference, Gundy didn’t seem too concerned about Bray’s ability to get up to speed and he recognized the offseason work his sophomore wideout put in.

“We overthrew him a couple times,” said Gundy. “He looked good out there. He looks good in his uniform. He’s 16 pounds heavier — I asked him on Friday — than he was. He didn’t handle press-man very well. He hadn’t been in it in a while. He’ll handle it better. They were able to cover him up pretty good on it. And then there was a couple balls that if Spencer backs it off maybe a yard, he can go up and get it. But he’ll be fine. Tough deal for him, right? Comes right out playing in conference play and trying to beat man coverage, so on and so forth. He’ll be fine.”

The hopes of the season aren’t necessarily tied to one receiver. Green, Bray’s fellow sophomore, has filled in well in his stead so far. He led the Cowboys with 115 yards and score, hauling in three passes over 25 yards. But Bray’s ability to stretch defenses and the added depth will only make the Cowboys that much harder to defend as the Big 12 schedule rolls on.