Nearly every Tuesday night during the 2003 season, a group of Cowboys — typically six or more — gathered at around 7 p.m. in a classroom. Future NFL players Tatum Bell and Darrent Williams were often there, players say, as were DeGrate, Girtman, Thomas Wright and others. It was a counseling session for those who had tested positive for marijuana, and some of the players who attended referred to it as the Weed Circle. Not everyone who violated the school’s drug policy was admitted to the Weed Circle; many players didn’t even know it existed. It was reserved for a chosen few, many of them stars or top prospects because, according to attendees, it came with an extraordinary perk: Players who went to the sessions could continue to use marijuana without penalty. 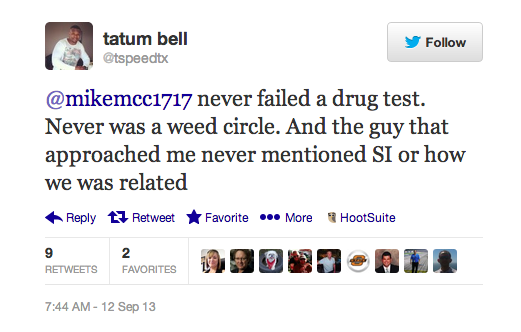 Now, again, Tatum Bell might not be the most reputable source given that he allegedly stole luggage from a teammate one time, but at least you have something pitted against SI that can be proven with physical evidence. And with Brett McMurphy’s excellent work here, that might be all OSU needs to bury Thayer Evans.

So if you’re SI, you obviously have nothing to gain long-term by releasing whether or not you have Tatum Bell’s drug report. If you have it then “cool, whatever” but if you’re OSU you can deliver the knockout blow to Sports Illustrated by showing these results (or non-results).

Now I know they probably can’t do this because this thing is protected by 29,392 laws but if you can I think SI is reeling enough in public perception that a hole like this would be the dagger to the entire story.