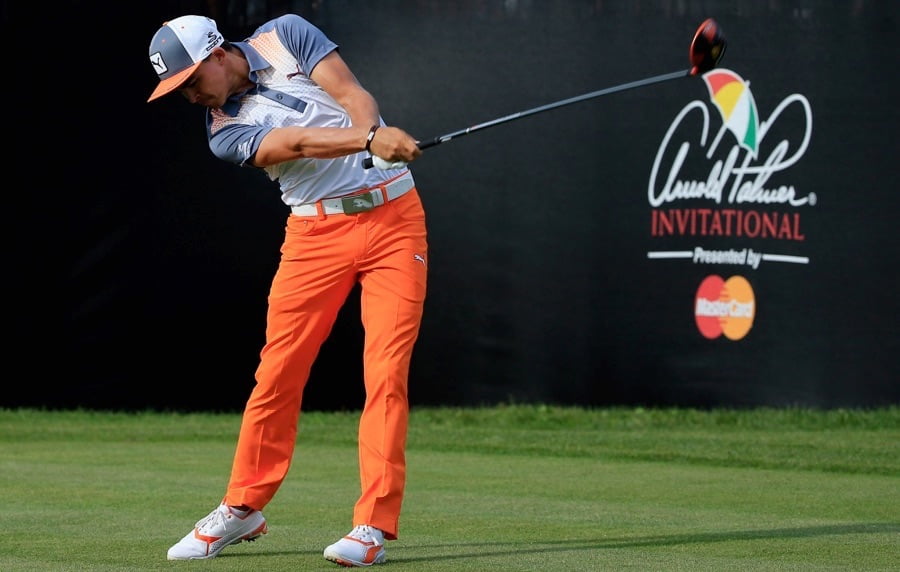 Rickie Fowler only has one PGA Tour win. (Getty Images)

Who’s Derek Ernst? Well, that’s kind of my point. Everybody who follows golf (and a lot of sports fans who don’t) know Rickie Fowler is.

Whatever the case, it’s not because he’s winning tournaments.

But why? Isn’t Fowler one of the best golfers in the world? Isn’t he ranked in the top 15 on the world golf rankings? Didn’t he shine on the 2014 Ryder Cup team?

He is all of those things and more. So why haven’t the wins followed?

Jake Nichols of No Laying Up has some answers.

Nichols recently did some terrific statistical work which showed that Fowler has played his best golf at the handful of events where it didn’t matter because there was an outlier so great (Rory McIlroy, Martin Kaymer, etc.) nobody could reasonably match what they did.

You can’t control what your opponent does in golf the way you can in other sports. You can only do what you can do.

Based on historical data alone, Fowler has had over a 40 percent chance to win four additional tournaments, including two majors.

“Fowler has played well enough to win plenty of events during his five seasons on Tour, but he has had a curious tendency to play his best tournaments in the strongest fielded events.”

“We’re all familiar with his top five finishes in every major last season – he had a 74% chance of earning a win based on his Open Championship play and 42% chance of earning a win based on his play at Valhalla in the PGA Championship – but my numbers also indicate he was very deserving of a win at the 2011 WGC-Bridgestone (62%) and 2010 Memorial (65%) – both of which have very strong fields. His victory at the Wells Fargo event in 2012 was actually only his fifth best tournament of his career (and also against a strong field).”

Golf events can be incredibly random. Bubba Watson has four top 10 finishes ever in major championships — two of them happened to be green jackets and now he’ll probably end up in the Hall of Fame.

Lee Westwood, on the other hand, has 17 top 10s at major championships and he’s largely known as the dude who couldn’t win the big one (a label Fowler is also having to fend off). Nichols continues:

“If Rickie Fowler had played as well in some events with weaker fields – the St. Jude Classic or Humana Challenge for example – as he did in those events above he would likely have 2-3 more PGA Tour wins.”

So don’t be fooled by wins and losses here. Rickie Fowler is one of the best golfers in the world.

If he keeps playing at the level he’s been at for the last 2+ years then eventually luck will start bending back in his direction and that “1” in the W column will get more and more crooked.