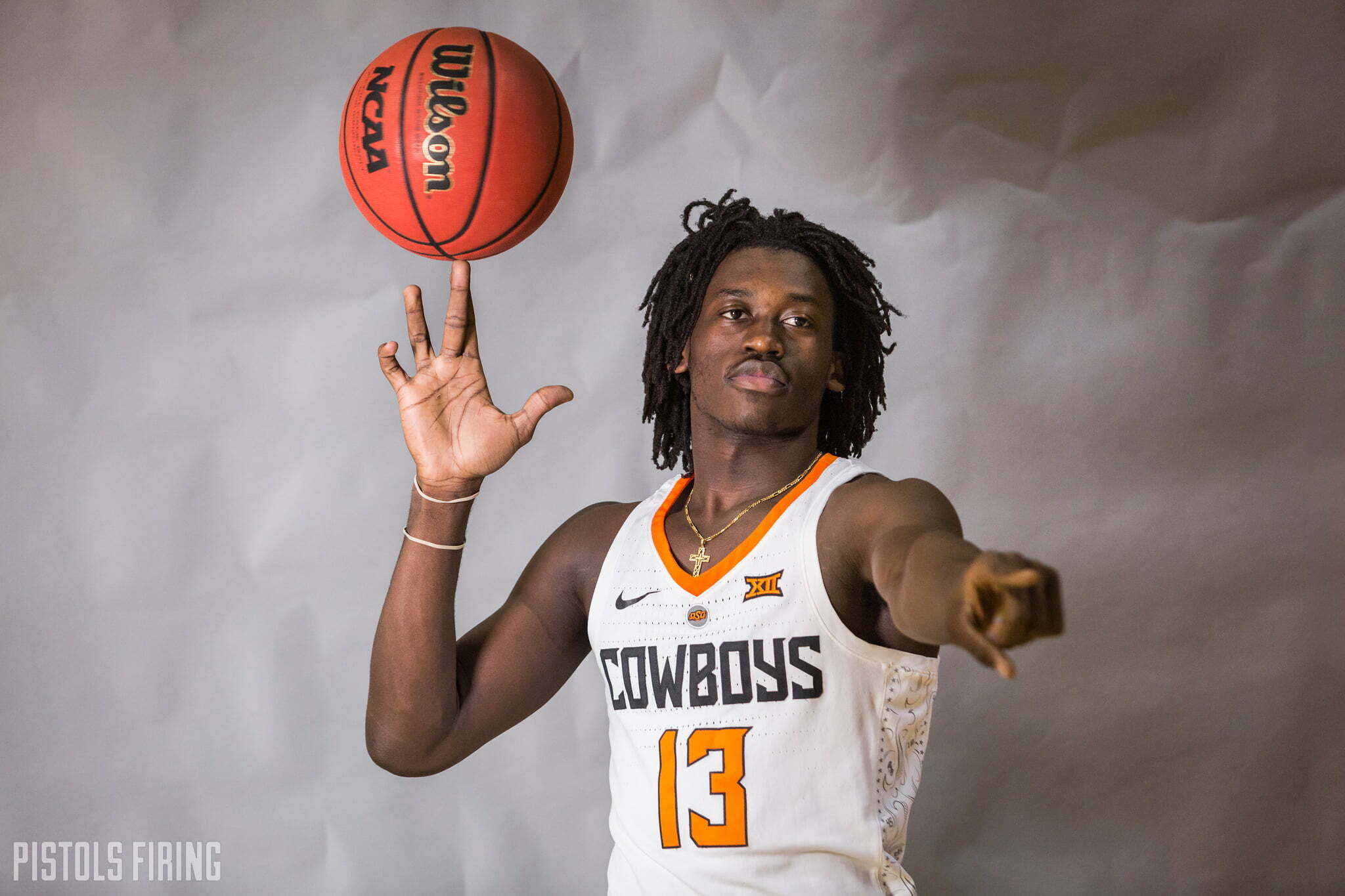 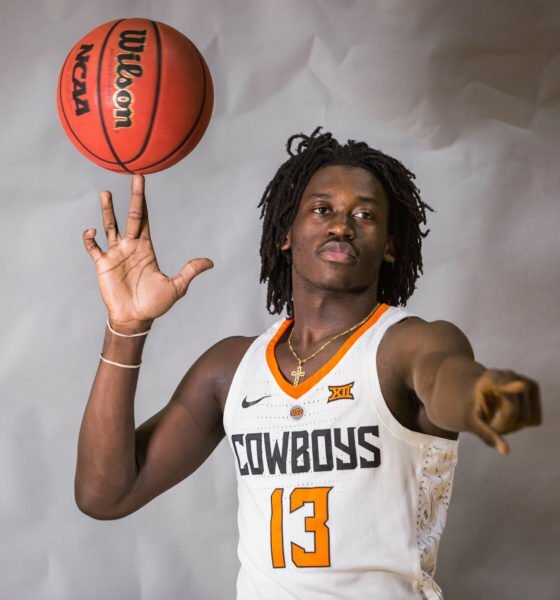 ‘His Heart Was in Stillwater’: Isaac Likekele’s Journey From Fractured Ankle to Freshman Leader at OSU

Mike Boynton talks about his freshman PG and why leadership doesn’t have an age.

STILLWATER — In a gym at Duncanville High School Isaac Likekele had all but lost the recruiting momentum he gained over the weekend.

Likekele, then in the summer before his senior year of high school, fractured his ankle one day removed from holding his own against the state’s top recruits. Earlier that weekend, Likekele, who played for the Marcus Smart-sponsored YGC36, took on Basketball University and the 10th overall prospect in the 2018 class, Quentin Grimes.

The game against Grimes ended up proving a lot about Likekele. It showed his leadership, as Likekele wanted the challenge of guarding Grimes, who is now at Kansas. It went a ridiculous five overtimes, showing Likekele could hang with elite-level prospects. YGC36 was without point guard Grant Sherfield, a role Likekele filled, proving to on-looking college coaches it was a position he could play despite being 6-foot-4 and long.

Roderick Clark, Likekele’s player development coach, said he asked Likekele if he was ready to guard Grimes the morning of the game.

“And he looked at me and was like, ‘Come on man, you know I’m ready,’” Clark said. “It gets to the game, and he is just frustrating the hell out of Grimes.”

Grimes and Basketball University ended up winning in the fifth overtime, but Likekele impressed with his defensive abilities, his scoring and how he enabled teammate Jalen Wilson, despite not having spent too much time at the point.

The next game, Likekele put up another solid performance against the No. 9 player in Texas, Kendric Davis (now at TCU). Likekele’s stock was at the highest it had been until the next day in a game against Dallas Showtyme when he fractured his ankle after a bad landing from a layup attempt. The buzz Likekele created that weekend was supposed to carry over to YGC36’s trip to Las Vegas, but Likekele was unable to compete and ended up sitting out from July until November with his injured ankle.

“It was a lot of bad timing right when we were getting into the last tournament of the summer, there were a lot of assistant coaches calling about him, but they hadn’t offered him yet,” YGC36 coach Vonzell Thomas said. “A lot of big, big schools, like Arkansas, Alabama, (OSU coach Mike) Boynton. All of the head coaches were coming to Vegas to see him, and we got to Vegas, and he couldn’t go. He couldn’t play. He tried to give it a go, but it was too much pain, and he had to sit out the rest of the (AAU) season. They really didn’t get a chance to see him.” 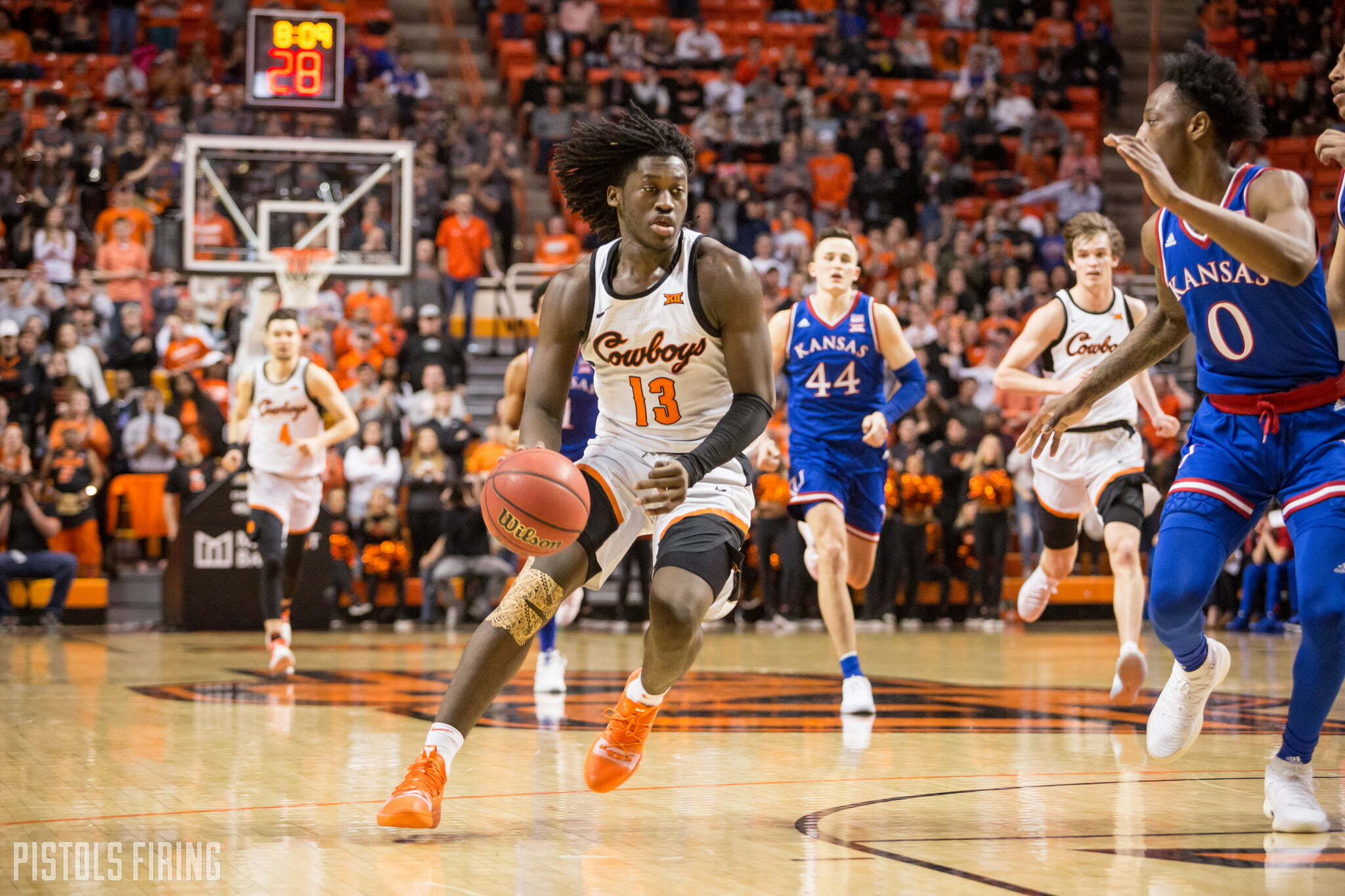 While dealing with his injury, Likekele took a visit (and committed) to Fresno State.

Likekele said he built a bond with then-coach Rodney Terry, who stuck with Likekele despite the injury. Likekele had other visits scheduled, but he decided to cancel them. Likekele said Terry had similar character traits to Boynton.

“I wasn’t gonna wait for colleges to offer me,” Likekele siad. “Coach Terry was gonna be there even though I got hurt. Coach Terry was still coming to the school. Even though I wasn’t practicing, he still came to see me. Then when I started playing again, he came all the way from California to come see me play all the time.”

Likekele signed to Fresno State in the early signing period, and that seemed to be that. But, that offseason, Terry left Fresno State for UTEP, and Likekele was granted his release after a successful senior season at Mansfield Timberview where he averaged 18 points, nine rebounds and five assists a game. He was named his district’s MVP and made the 5A All-State team.

Likekele already had a bond with Terry at UTEP, but Likekele said the situation wasn’t for him, leaving OSU and Texas Tech as his final two schools. Sarah and Likekele’s father, Serge Likekele, moved to the United States from Africa in the 1990s, and Sarah said she and Serge weren’t the biggest basketball people, so they weren’t in Likekele’s ear as to where he should or shouldn’t go.

“He always makes good decisions, so whenever he said that’s where he was gonna go, we were OK with it,” Sarah said. “Isaac will be fine. Even if he went to the North Pole, he would be OK.”

Likekele chose OSU over Texas Tech and was the last piece of Boynton’s 2018 recruiting class.

“Ultimately, I would say (his relationship with Boynton is) the sole reason he went to Oklahoma State,” Clark said. “If you think about it, his final two schools were Oklahoma State and Texas Tech. Obviously, Texas Tech is No. 1 in the league right now tied with K-State, and O-State is at the bottom. Isaac knew coming in that it was going to be a situation that was standing in front of him. Obviously he came in with the mindset of winning as many games as he could, but he knew that they were gonna be young. He knew that they were gonna be inexperienced. He knew it would be a process, but ultimately he believed in Coach Boynton and his vision.

“That coaching relationship, believing in Coach Boynton, believing in Coop (OSU assistant John Cooper), I think that was the icing on the cake for him to make that decision. He could’ve easily went down the road to Lubbock, but ultimately his heart was in Stillwater.” 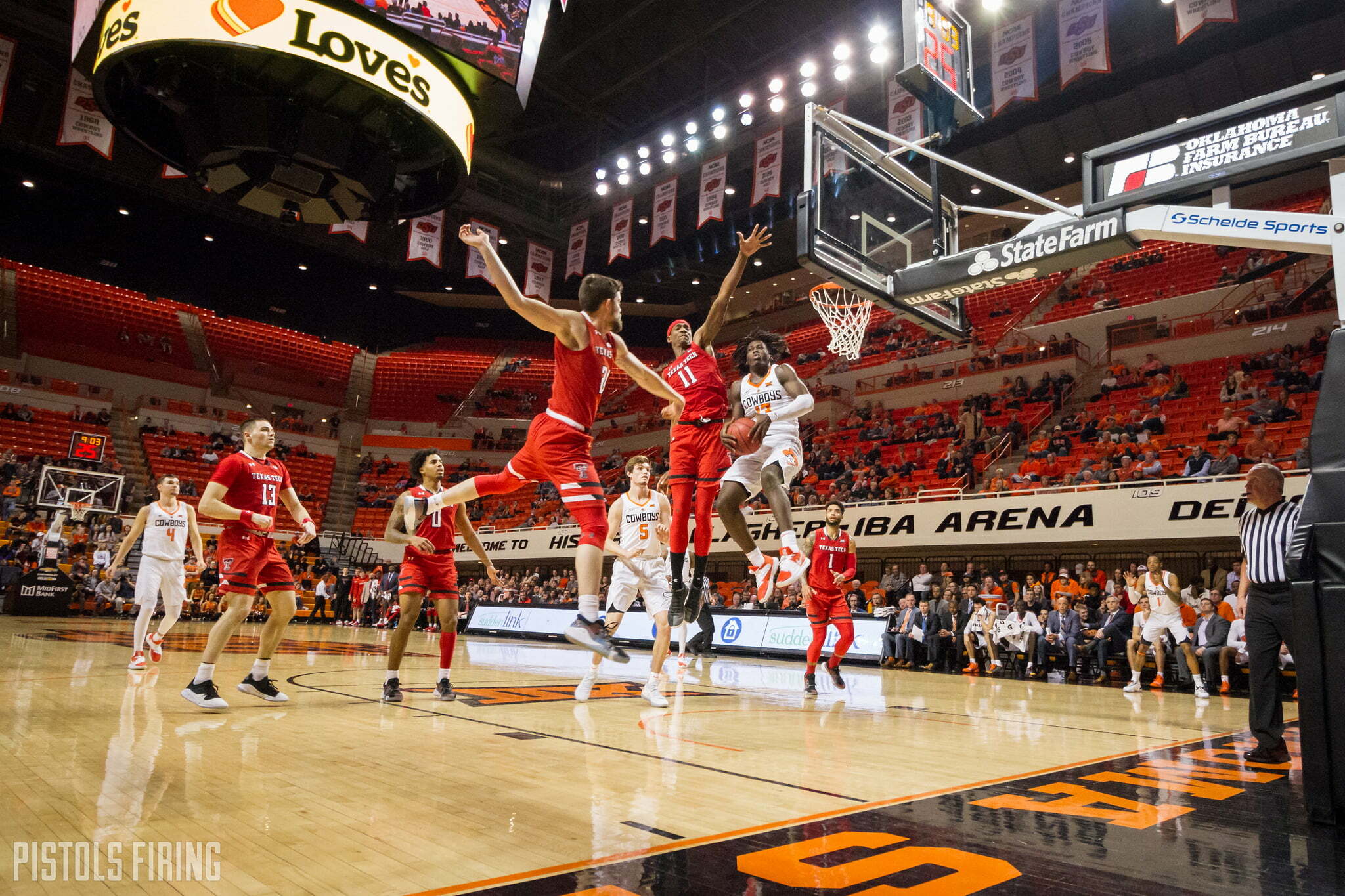 At 6-foot-4, 210 pounds, Isaac Likekele is big for a collegiate point guard.

His size is a big contributor to his style of play, something Clark and Thomas call an “old man game.” Clark described an old man game with an example of the older guy playing at a rec center who isn’t going to dazzle anyone with flashy moves, but it’s undeniable that he can ball.

“They don’t blow you away with a lot of ball-handling and being super shifty,” Clark said. “They just know how to play, and they’ll pick you apart. He’s not super fast, but he has a really good change of pace. He’s not just gonna overwhelm you with making a whole bunch of ball-handling moves. He’ll just kinda slowly put the ball between his legs, lull you to sleep then blow by you. When he gets smaller guys crawling up under him, he’ll just back them down the floor and get him to a spot he needs to get him instead of trying to speed dribble by him.”

Clark compared Likekele’s game to that of Mark Jackson, who played 17 seasons in the NBA before becoming a the Warriors coach from 2011 to 2014.

Thomas said he sees a lot of similarities between Likekele and Marcus Smart, who Thomas also coached in AAU.

“When I coached (Likekele), I was surprised he wasn’t getting recruited more,” Thomas said. “I was surprised because, being Marcus Smart’s coach also, I was seeing the same things in Isaac that I was seeing in Marcus. As far as leadership skills and his defense and all the little things he does. I was really shocked that he wasn’t getting recruited heavily.”

Along with that, Likekele and Smart lead all OSU players in assists in their freshman season. Smart holds the record with 139 assists, and Likekele has 124 with at least a game to go. They are also the only freshmen in school history with 120 assists and 40 steals.

Likekele’s old man game hasn’t kept him from highlight reel plays this season. Against West Virginia on Jan. 12, Likekele had a monstrous dunk as part of a 23-point game.

With that said, a lot of Likekele’s offensive work, like in his 23-point outing against Baylor a few weeks ago, involves him methodically getting to the rim and using his size to get advantageous looks.

“You’ll see a lot of young guards and mix tape dudes try to put the ball between their legs 50 times and do a million in-and-outs,” Clark said. “Isaac doesn’t do that. He doesn’t have to. He’ll overwhelm you with his mind.” 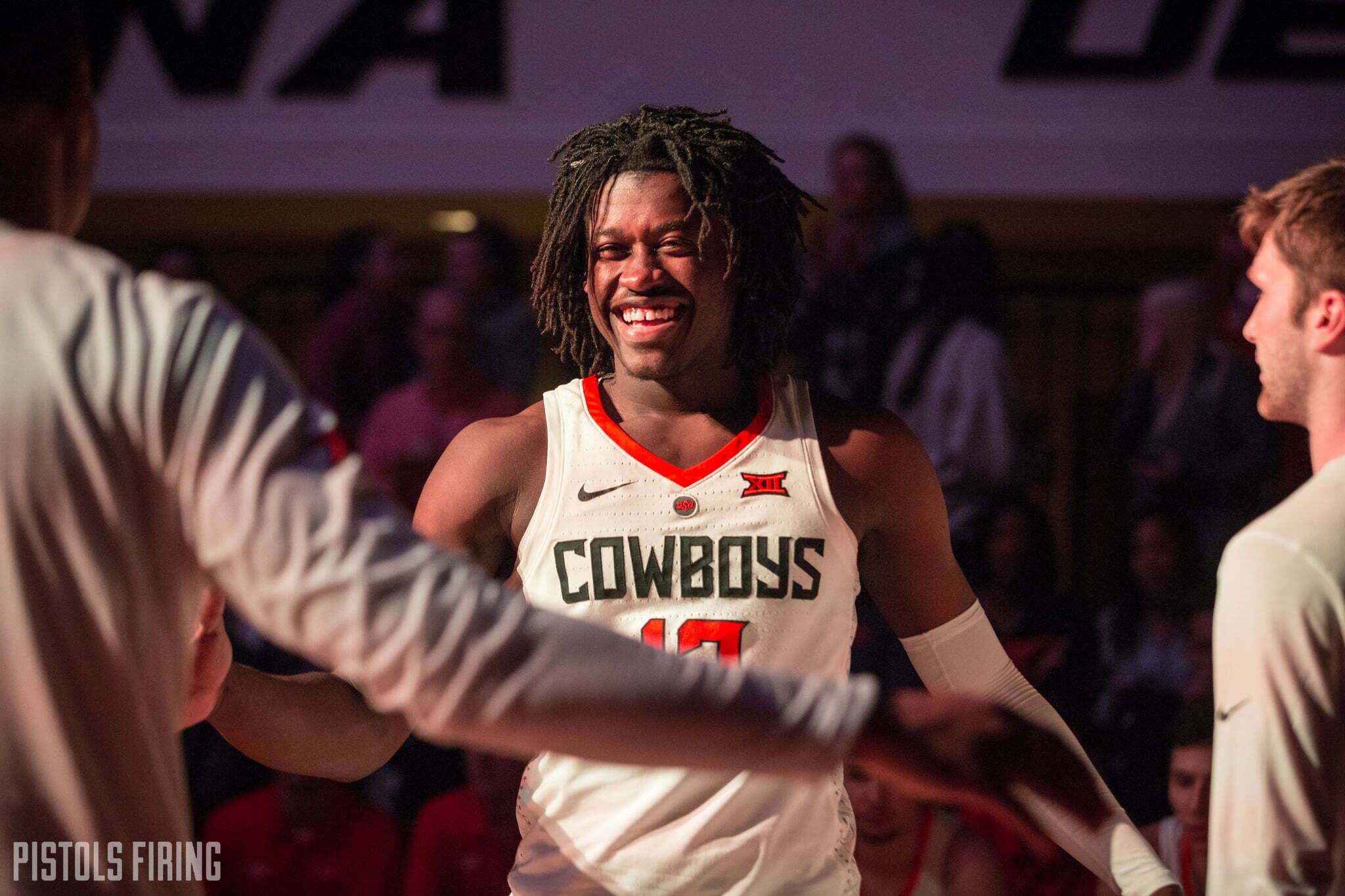 ‘Leadership Doesn’t Have an Age’

After the game, Sarah said Isaac apologized to the whole community for the team’s performance. Sarah said she didn’t understand why he felt he had to, but in Timberview’s next meeting with Waxahachie, less than a month later, Likekele’s team lost by only 2 points. It didn’t stop there as Timberview went on to win a 5A state title, and in the semifinal and final, Likekele averaged 12 points, 13 rebounds, four assists and four steals a game.

It didn’t take much more than one practice with YGC36 before Thomas named Likekele team captain. Sarah said Likekele’s middle school team didn’t lose a game while he was there, and the coach would ask her why the team was always listening to Likekele instead of him.

“People listen to him for some reason,” Sarah said. “He’s very driven. If Isaac wants to go for something or to do something, he’ll find a way, and he’ll bring everybody along. I don’t know where it comes from, but that’s who he is.”

There are a few theories as to where his leadership and charisma come from. Clark said he thinks it’s a byproduct of the work ethic his parents instilled in him. He said Isaac knows he works hard, and that’s why he is confident about it. Sarah said maybe his maturity comes from being the youngest in the household, as he has always been around older people.

Wherever it came from, it’s paid off for Likekele and the Cowboys this season. As a freshman, Likekele has started every game. It’s a necessity now, as he’s the only scholarship point guard on the roster, but Likekele beat out former MAC Freshman of the Year Michael Weathers and grad transfer Mike Cunningham in the beginning of the season.

“It’s a coach’s dream to have kids like him,” Thomas said. “I told Boynton this, I don’t know if he believed me, but I said, ‘Hey, once you get him, and he gets in the gym with you, you can’t help but play him.’”

Likekele’s instant success in Stillwater wasn’t much of a surprise to those who know him. Clark said he told Boynton that Likekele would be one of the best locker room guys Boynton had from the first day Likekele was there. Clark said Likekele won’t make excuses as to why things aren’t going his way, but Likekele would work to change those things.

“It’s really not that crazy to me because I feel like anybody, as long as you put the work in, you’re always going to be rewarded in some type of way,” Likekele said. “As long as you don’t cheat the game of basketball, it always pays its way back. I didn’t think it would happen this fast, but I knew at some point, eventually I was gonna be rewarded in this game. Whether it was playing here, Fresno State, anywhere, I felt like I was gonna be rewarded some type of way.”

Likekele’s leadership abilities followed him to Stillwater, too. In the Cowboys’ summer practices before their European trip, many of the then-six freshmen were just trying to make it through practice, while Likekele was able motivate and communicate like he was one of the juniors.

“It’s hard a lot of times for young guys to want that (leadership role) because they don’t understand that it’s important,” Boynton said. “He’s a winner. He’s won a state championship in high school. He’s a guy we certainly look forward to having evolve as a leader. Leadership doesn’t have an age.”