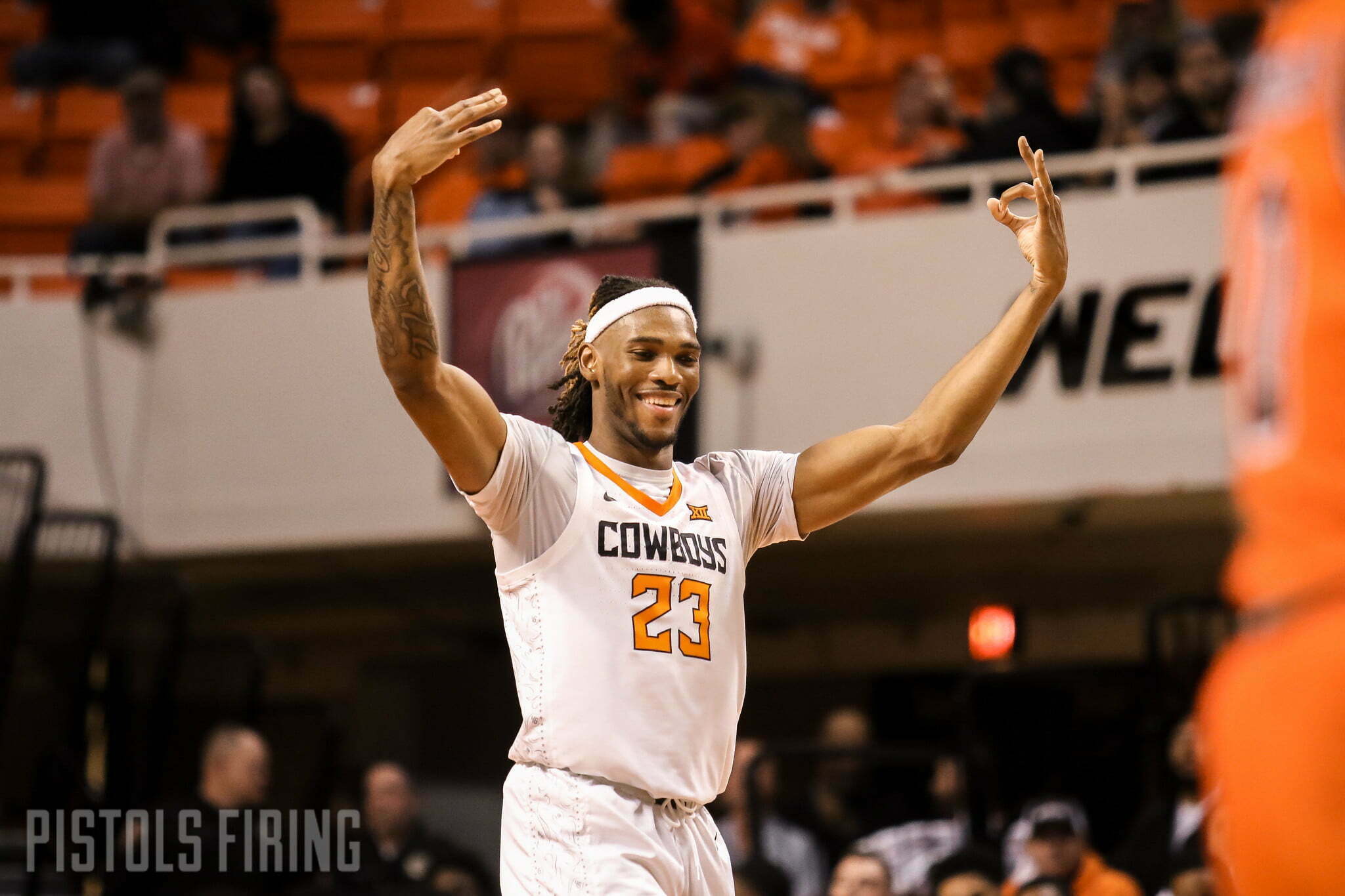 STILLWATER — Oklahoma State coach Mike Boynton and forward Tyreek Smith met with reporters Thursday in Gallagher-Iba Arena. Here are three things that stood out from what they said.

Tyreek Smith is set to become the first person in his family to earn a college degree this weekend, but he’ll wait to walk the stage in his cap and gown with some more of his teammates in May.

Smith, a 6-foot-9, 217-pound forward, started his college career at Texas Tech for the 2019-20 academic year and even through transferring schools, he is still on pace to get his degree in University Studies a semester early.

“Nobody in my whole family ever got this far,” Smith said. “I’m glad I can be the first one. I’m setting the example for the younger kids in my family — my little cousins, my nephews and my nieces. I just feel proud of myself, and I know they’re proud of me. It’s a good feeling.”

On the court this season, Smith — a redshirt junior — has been a dunking machine off Boynton’s bench. Having played in all 10 of the Cowboys’ games, Smith is averaging 6.8 points and 4.1 rebounds a contest.

“He’s gonna be the first person in his family to graduate from college, and that’s gonna change what everyone else following him thinks is possible in life,” Boynton said. “That’s pretty cool to think that he is someday gonna have children and they’re not gonna think else but going to college is a real thing, and whoever his younger siblings are, nephews or cousins, that think that you can go to college. Because going to college and getting your degree gives you a better chance to have success. I think the statistics bear that out.”

A through line to a lot of the Cowboys’ issues this season has been turnovers.

OSU is averaging 14.8 turnovers a game, the most among Big 12 teams, and the Cowboys’ 0.9 assist-to-turnover ratio is also a conference-worst. Boynton said Thursday the team will adjust some things personnel-wise to try to buck that trend.

“One thing you’ll probably see a little bit more is John-Michael being the initiator more often, giving Bryce (Thompson) and Avery (Anderson) a little bit more opportunities to do what they do well, which is score and be finishers as opposed to facilitators,” Boynton said. “That was always kind of the thought process as we recruited them, but you get to the game and you want to see how those other guys have grown in that area. Can they handle more responsibility in making plays for others? What we’ve found 10 games in, you’ve got enough data to make some adjustments, and that’s probably one of the adjustments that we’ll make.”

Distributing the ball was something Wright excelled at in his time at High Point, having 252 assists to 182 turnovers.

Here is a breakdown of how OSU’s three starting guards (Wright, Anderson and Thompson) have done this season:

There is one Big 12 team absent in Joe Lundari’s most recent Bracketology — Oklahoma State.

It’s still early in the season — Big 12 play hasn’t even started yet — but it’s no secret that if the Cowboys want to make the dance a year after being banned from postseason play, they need to get going. Smith said that reality has hit the team since it returned from Brooklyn, where OSU lost to Virginia Tech last weekend.

The “games we shouldn’t lose” category includes the Cowboys’ loss to Southern Illinois (where they held a 13-point second half lead) and UCF (where they had a 17-point lead in the first half before crumbling).

If the Cowboys can find a way to stop those collapses, the Big 12 will provide plenty of resume-building opportunities, but that conference slate is coming fast.

“I think a little bit of a light came on for them in this sense: We have four losses now — we’d certainly rather have none — but I think the team finally realized that we’ve only been beaten once,” Boynton said. “In my opinion, UConn beat us. When Moussa came out of the game, it became very difficult for us to get through without him on the court considering their team, how they were playing. But a 1-point loss at home to Southern Illinois, we made colossal mistakes. We had a 17-point lead against Central Florida. Then [against Virginia Tech] it’s a tie game with two minutes to go, we got the ball, and we don’t get a shot for three straight possessions — not because they ran and trapped us, we just threw the ball away.

“I think they realized if we’re gonna reach the goals we have, then we gotta take ownership and play better. It’s been very spirited, very competitive. Guys seem pretty motivated. Probably had our best practice of the year [Wednesday]. We had another really good one [Thursday], and that’s what gives you a chance. You’re only as good as your preparation. We’ve prepared well, and now we’ve gotta go put it into action.”