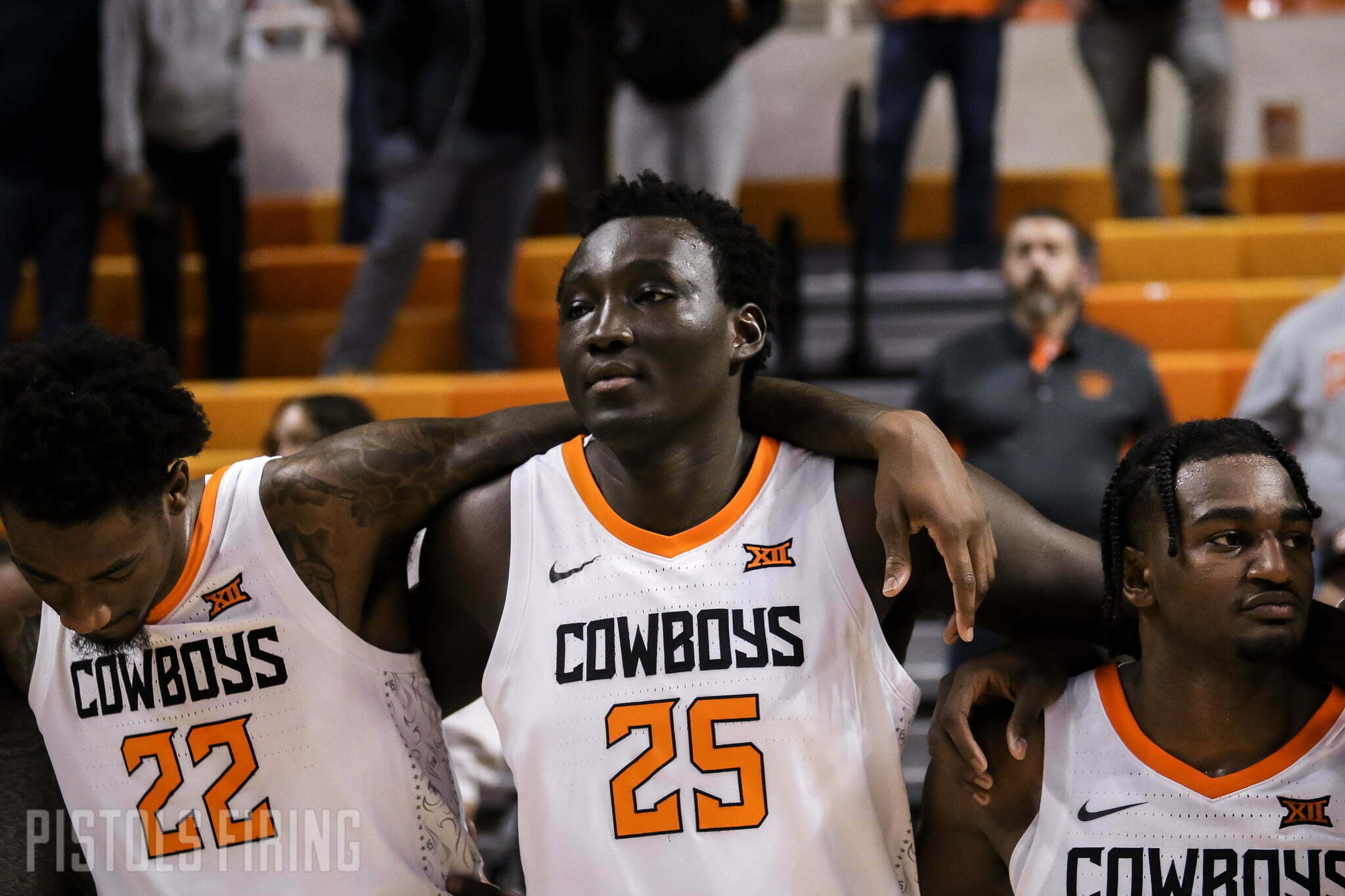 STILLWATER — Fresh off back-to-back down-to-the-wire losses, the Cowboys have to get back in the saddle this weekend for a trip to Waco.

Oklahoma State plays Baylor at 5 p.m. Saturday in the Ferrell Center. The Cowboys held their midweek media availability Thursday. Here are three things that stood out.

Getting Over the Hump

The Cowboys have been within a basket in the final four minutes in each of their three Big 12 losses, but they weren’t able to get over the proverbial hump.

After a tough loss Tuesday against Kansas State, OSU coach Mike Boynton said that if the team doesn’t get dejected by the losses, he is confident the Cowboys will eventually find a breakthrough. So, how did Thursday’s practice go?

“The guys stayed together,” Boynton said. “For me, it’s about continuing to push them because this time of year, we’re 16 games in, it becomes hard to stay focused every single day on the grind. If you start to look at the schedule in it’s totality, it’s like — sh*t. Excuse my French, but when do we get a break? And there’s not one. There’s not one on there. It takes the coaches to continue to push those buttons to say, ‘Hey, if we want to do this, there’s no way out. You gotta go through.’ There’s no outs. There’s no one to save you. You gotta go through it, and you gotta deal with it every single day. You gotta watch the teams around the league and see that everybody’s dealing with the same stuff.

“[Practice] was intense. It was probably a little more confrontational today, but that’s OK.”

Despite being 9-7 on the year now, OSU is still ranked 30th in KenPom. The Cowboys are the second-highest ranked team with at least seven losses (Creighton is ranked 19th at 9-8). They’ll get another chance at a high-level win this weekend as they head to Baylor for a game at 5 p.m. Saturday.

Bernard Kouma on Tuesday scored his first basket in more than a year.

In his third year with the program, Kouma has now scored 47 points as a Cowboy. He has seen an uptick in his minutes as of late after Moussa Cisse went down with an ankle injury Jan. 2 against West Virginia. Kouma played two minutes in that game against the Mountaineers before playing two more against Texas and four against Kansas State on Tuesday.

Before this three-game stretch, Kouma had played in only three of the Cowboys’ first 13 games.

He might not have the offensive ability of a Kalib Boone or the pure athleticism of Cisse, but Kouma does one underrated thing exceptionally: screen.

“I don’t know if I’ve ever seen a better screener,” Boynton said. “… Bernie, he takes pride in it. He understands that there’s value to be added to the team by doing that, helping your teammates get open. And then sometimes you just fall into a 1-foot shot yourself.”

At 6-foot-10, 240 pounds, it’s easy to see why defenders would have a hard time pushing past Kouma, but screening also takes a willingness on Kouma’s part to take the contact to free up a teammate. There was at least one person who didn’t look past Kouma’s ability to free up a ball-handler, and that person was a No. 1 NBA Draft pick.

“I’ll tell you guys something that you probably don’t know: When Cade (Cunningham) was here, Cade wanted Bernie on the court as much as anybody out there because of that,” Boynton said. “He understood the value of helping him when teams were guarding him the way they were. I haven’t coached [a better screener]. I don’t know if I played with one, but he’s tremendous at it.”

Newton Searching for a Rhythm

Woody Newton has been through a lot this season.

A junior from the D.C. area, Newton lost his father early in the season, forcing him to miss seven nonconference games as he returned home to be with his family. Newton said his father was instrumental in him getting into sports — taking him to Washington Commanders and Washington Wizards games as a kid.

“There’s not a day that goes by I don’t think about my pops and stuff like that,” Newton said. “Just being able to be with my brothers, my teammates, Coach Mike, [Larry Blunt], they help me through it, keep me level headed and make sure I’m always good if I ever need anything. It’s tough, but I’m getting help through it.”

On the floor, Newton has averaged 13 minutes a game in Big 12 play, playing 21 minutes Tuesday — the most he has played in a game in an OSU uniform. He has averaged three points a game in the four conference games. The only true stretch forward on the roster, Newton has been in search of a breakthrough from 3-point range. He is 0-for-4 from deep in Big 12 play and 3-for-11 on the season.

Boynton spoke Thursday on Newton needing a confidence booster. If he is able to gain some confidence, it could be big for the Cowboys.