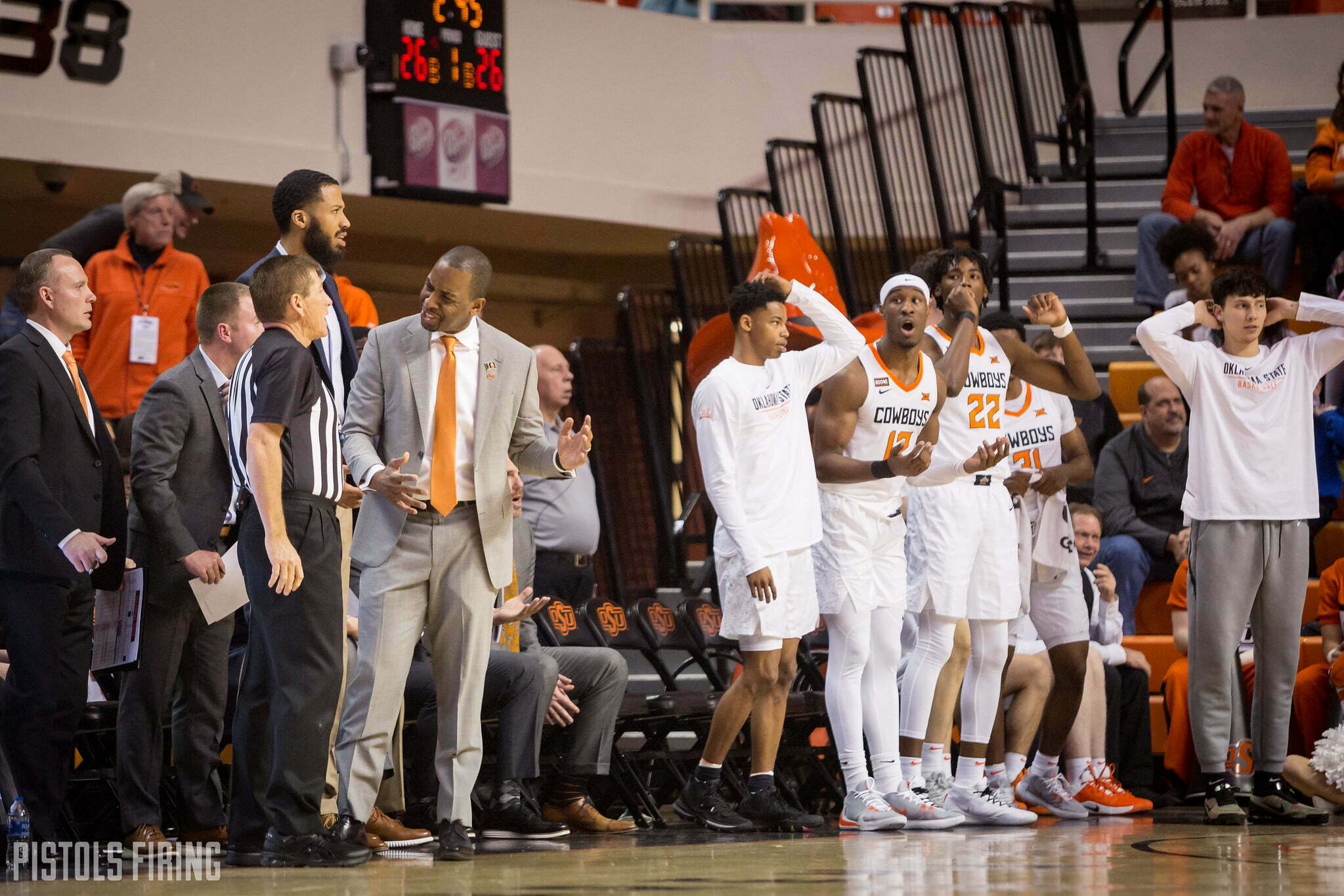 STILLWATER — After a wild weekend in Waco, the Cowboys are back to work in Gallagher-Iba Arena.

Oklahoma State coach Mike Boynton met with reporters before his team’s practice Monday morning. Here are some of the highlights he hit on before the Cowboys take off to Manhattan to play Kansas State on Tuesday night.

Boynton on His Ejection

At 38, Mike Boynton is a young head coach, but he has been around basketball for a while. Saturday’s loss to Baylor marked the first time he can remember that he has been ejected from a game.

With the game’s personal fouls finishing a lopsided 31-20 in Baylor’s favor, Boynton harped on the game’s officials to the tune of back-to-back technical fouls in the final 10 seconds.

After chirping more at the stripes on his way across the court to the locker room, Boynton cut back to shake hands with all of Baylor’s bench before getting off the floor.

“I usually try to be pretty mild-mannered,” Boynton said. “At that point, I thought it was important for our players to know that I’m gonna have their backs, stand up for them when I feel like it’s necessary. I certainly thought it was necessary at the end of the game.”

Boynton’s decision to take the time to congratulate the Bear bench garnered some national attention, as many considered it a classy way to get kicked out of a game. Boynton goes on a strict diet every February and along with not eating meats, he also gives up social media. So he said hasn’t seen the splash it made through Twitter.

Boynton said he had a conversation with Curtis Shaw, the Big 12’s coordinator of men’s basketball officials, but he hasn’t talked with commissioner Bob Bowlsby.

“I hope my actions didn’t take away from what was a really good college basketball game,” Boynton said. “It’s a 4-point game with a minute to go or so. We shoot a layup that gets waved off, otherwise it’s a 2-point game. You’re right there. I know people who don’t necessarily watch look at the final score and look at our record and say, ‘Man, that coach is really an idiot. He’s got a team who’s got one win in Big 12 play, and they lose by 8 points and he gets ejected and everybody thinks it’s the officials’ faults.’ If you watch the game, you know that’s not how it played out.

“… It was important that the Baylor players and staff know that they played a good game. Congratulations on what’s been a really, really good season for them. Unless we play them again, which could happen in a conference tournament, I wish them all the success they can have moving forward.”

Weber coached Team USA to a win in the U19 FIBA World Cup in Greece, and Tuesday, Likekele and Weber will meet as opponents for the first time since.

“He has a different type of strategy to his game, defensively and offensively,” Likekele said in July. “You put in some plays, going over there having to change my whole defensive scheme from what we do here and what they do there. That really helped me grow as a player, having to actually listen and learn and having to adapt real fast to another coach.

“He’s a great guy. It was fun playing for him. I liked his energy. Winning that gold medal together, just like any other deal, it felt great.”

The Cowboys have been thin in the backcourt for the past few games.

After suffering a minor facial fracture against Oklahoma, Lindy Waters missed OSU’s win against TCU before returning for Saturday’s game against Baylor. He wore a mask in that clash with the Bears and has in practice early this week, as well.

“It’s just a matter of pain tolerance and how good he feels,” Boynton said. “More mentally than physically because everybody has aches and pains this time of year physically. It’s just a process for him understanding that if he’s good mentally then he’s gonna have to fight a little bit physically to get himself back out there and continue to help us.”

Chris Harris started OSU’s game against TCU last week but went down with a leg injury early. He didn’t play in the Baylor game, and Boynton said he hasn’t practiced this week.