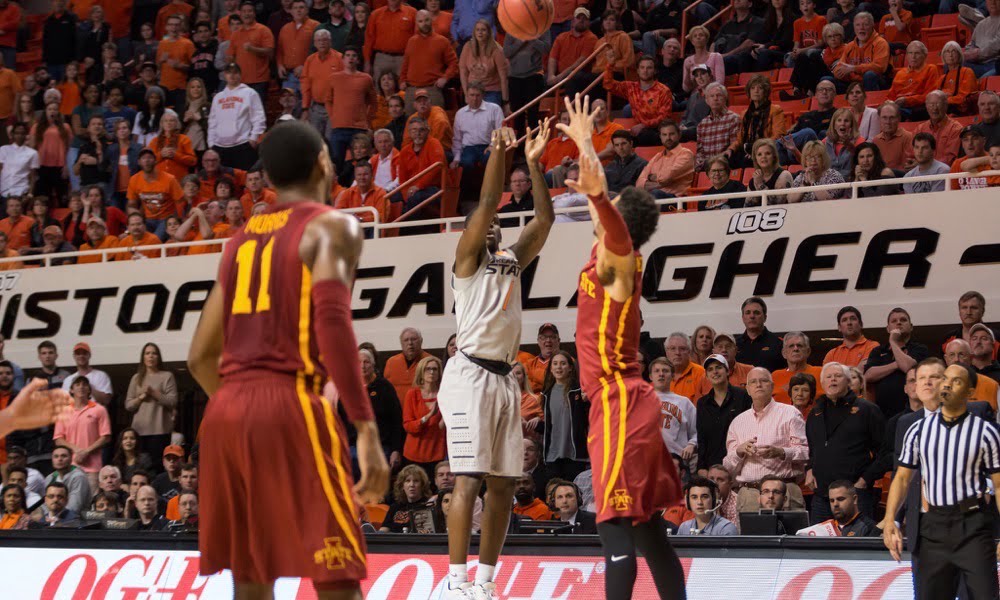 Tonight will see the kings of February (both are 6-1 for the month) face off as the Pokes head way up north to visit the (19-9, 11-5) Iowa State Cyclones. The Cyclones won in Lawrence to start the month and are on a five-game streak since putting 6’8′ freshman Solomon Young into the starting lineup.

Maybe the Pokes will be able to catch Iowa State off guard, as the Cyclones are likely to be consumed with a silver medal game against the Mountaineers on Saturday. Either way, it’s premium gasoline only at the Hilton Coliseum with a couple of high-octane offenses both averaging 79.2 points per game in league play.

The 2 hottest teams in the league face off in Ames tomorrow. #okstate pic.twitter.com/DJszne3mGK

Splits with KU and Baylor and sweeps of lower-tier league teams look good. So close to a couple of top 25 non-con wins over Cinci and Gonzaga! Iowa State held off a hungry Baylor team in Ames on Saturday, with Deonte Burton hitting a dagger bank shot-three pointer deep in the second half to seal the game. Baylor mauled the Cyclones on the glass (37-17) but couldn’t keep pace with their stellar 60 percent shooting from the field.

Baylor point guard Manu Lecomte went down midway through the second half with a bum ankle and not having his playmaking doomed the no. 9 Bears. Baylor racked up 20 offensive rebounds but Iowa State’s hot hands and Hilton magic were too much.

1. A Couple of Wizards

Here’s a brainteaser: has the Big 12 historically had more prominent point guards or quarterbacks? RG3, McCoy, Bradford, Weeden, Optimus Klein have all been great. But I really like this current crop of point guards with Jawun, Baylor’s Manu Lecomte, KU’s Frank Mason and Iowa State’s Monte Morris.

Ironically, that list strongly correlates with the top teams in league play. Tonight will feature two of the top three point guards with Evans and Morris facing off, both equally capable of filling it up on their own (17.0 and 16.9 points in league play) and running their offenses (6.8 and 6.4 assists in league play).

Just listen to Underwood wax poetic on Morris and the Cyclones here:

Tomorrow's matchup at Iowa State will center around 2 of the best point guards in the country in OSU's @j3vans1_ and ISU's Monte Morris. pic.twitter.com/uJSUg0qstm

Morris is averaging an insane 7.9 assists for each turnover ( Jawun has a solid 2.2-1 ratio) that earned him the Big 12 player of the week. Jawun hasn’t met a match up he didn’t like over the past few weeks, I can’t imagine an Iowa State team with little rim protection will slow him down either.

OSU and Iowa State rank second and third in the Big 12 in 3-point percentage. Five of the top 15 three point shooters in the league will be in uniform and it’s likely you’ll see steam coming off the nets NBA Jam-style Tuesday night. Just take a look at what the Pokes did to a solid Texas Tech defense on Saturday.

HIGHLIGHTS: The Cowboys used a ton of hustle and a hot first half to run away from the Red Raiders yesterday afternoon in GIA. #okstate pic.twitter.com/GOJMhAkuUI

Baylor came in on Saturday and may have left behind a plan for success. While the Pokes won’t be able to sniff the 20 rebound margin the Bears racked up, the “Second Chance U” Cowboys get all the put back opportunities in Underwood’s system.

And playing a Cyclone team that’s notorious (only getting 31.7 percent of defensive rebounds, 275th in the country) for playing soft on the boards, cleaning the glass will go a long way.

Iowa State has relied on super hero levels of ball handling from Monte Morris and a senior-studded lineup, only turning the ball over 14.1 percent of the time (good for second in the country). To compensate for the lack of rebounds, they’ve played smart with the ball and shot well to make up for it.

Watching to see who wins these battles (OSU on the glass, Iowa State in turnovers) will likely be a safe bet as to who goes into the weekend with a six-game streak in tact.