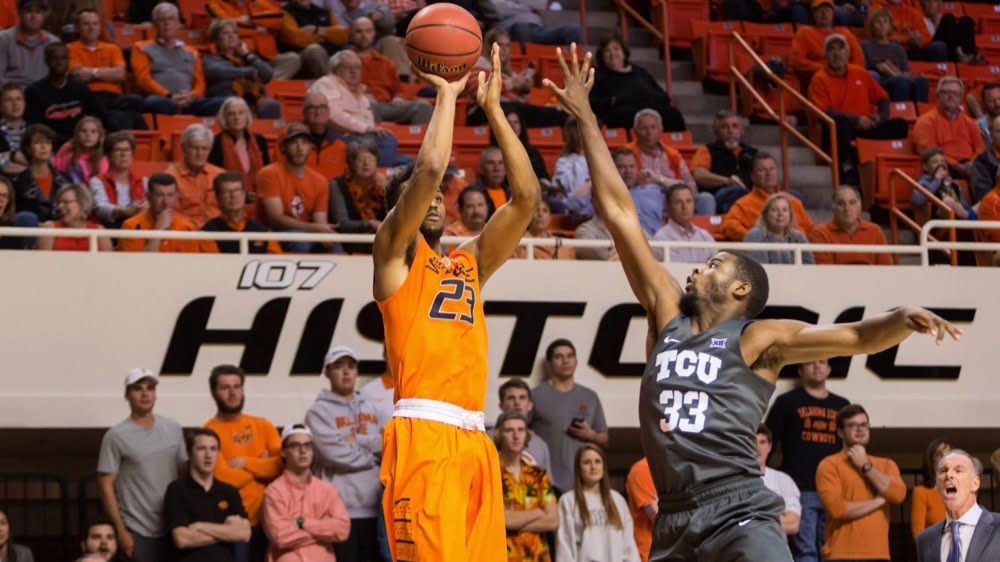 A solid resume that lacks signature wins but remains fairly unblemished as they’ve beat everyone they should have. Handed a season-high 18 point loss, the Frogs returned home dejected after trailing the vast majority of the game against the rival Baylor Bears on Saturday. The TCU offense was on life support, only scoring 17 points in the first half on only one assist. The biggest gap was on the boards where Baylor dominated, swiping 25 defensive boards and ruining second chance opportunities for the Frogs.

Johnathan Motley dominated the TCU front court to the tune of 25 points on 12 of 15 shooting and Baylor’s spot-duty shooting guard King McClure had one of his best games of the year, hitting 3 of 4 from deep for 13 points. Baylor’s sleepy three point shooters hitting nearly 39 percent from deep bodes well for the Cowboy bombers on Wednesday night.

Sometimes you’re in the wrong place at the wrong time and Stillwater on January 23rd was just that for TCU.

What turned out to be the second win in a five game streak, the Cowboys were putting everything together and picking up serious momentum that night. Jawun emerged from his slump like an angry bear out of hibernation, lighting up the Frogs for 27 points and assists. While TCU drew it close with ten minutes to go, the Pokes put their foot down per Coach Underwood:

“The last 10 minutes of that ballgame is how you close out a game. (Shoot) 12 of 15 from the perimeter, you make your free throws and then no turnovers in the last eight and a half (minutes) or so.”

TCU’s talent-rich front line was hit and miss, disappearing for stretches. The skilled 6’11” Slovakian had a phenomenal second half but it just wasn’t enough to overcome the Cowboy offense shooting 64.5 percent from the field after the break.

To cap off the night, Dillard put the Frogs to bed with this beauty:

The top-rated recruit in Horned Frog basketball history is freshman point guard Jaylen Fisher and he will be the swing vote if this TCU team is to go dancing. While his career-high 18 points wasn’t enough to keep TCU in the game against Baylor on Saturday, it usually is. When the freshman guard gets into double digits, the Frogs are 12-3 and he’s got a four game streak in double digits.

Rationality says that the team’s two leading scorers (star big man Brodziansky and Texas A&M transfer Alex Robinson) need to get their numbers for the team to be successful, but it’s a prolific third banana that helps the TCU offense to get over the hump.

2. Get after the Ball

Quoted after the Texas game in early February, head coach Jamie Dixon laid out a crucial point for the TCU offense:

“Our guards are going to have some turnovers because we let them do a lot of things. We rely on them to create shots for a lot of guys. So we’re going to have to play through the mistakes. For the most part, we haven’t had them [the last two games].”

So much of TCU’s offensive efficiency depends on the newbie guards not turning the ball over. A week ago, the Red Raiders were able to take the game into the final seconds by turning over the Frogs 21 times in Fort Worth.

Highlights from tonight's game at TCU, Red Raiders face No. 3 Kansas at 1 p.m. on Saturday #WreckEm #4to1 pic.twitter.com/Prrr6XO5TB

I won’t ask for anything for Christmas ever again if I don’t have to watch another big play keep-a-way from Dillard/McGriff/Hammonds again this year. Fortunately for the Pokes, Texas Tech last week exposed a vulnerability in junior forward Vlad Brodziansky’s offense: double him fast and he coughs it up on the pass.

Now, the dude shoots quick so you’ve got to collapse quickly. But go ahead and forget about the TCU deep ball at 34 percent, it’s a much better shot than the 59.6 percent-shooting Brodziansky.

Fun side note: of course we looked at but didn’t offer the skilled 6’11” big man at a Kansas junior college… you throw Brodziansky in a class with Evans and Dillard, you’ve got a potential all-timer.