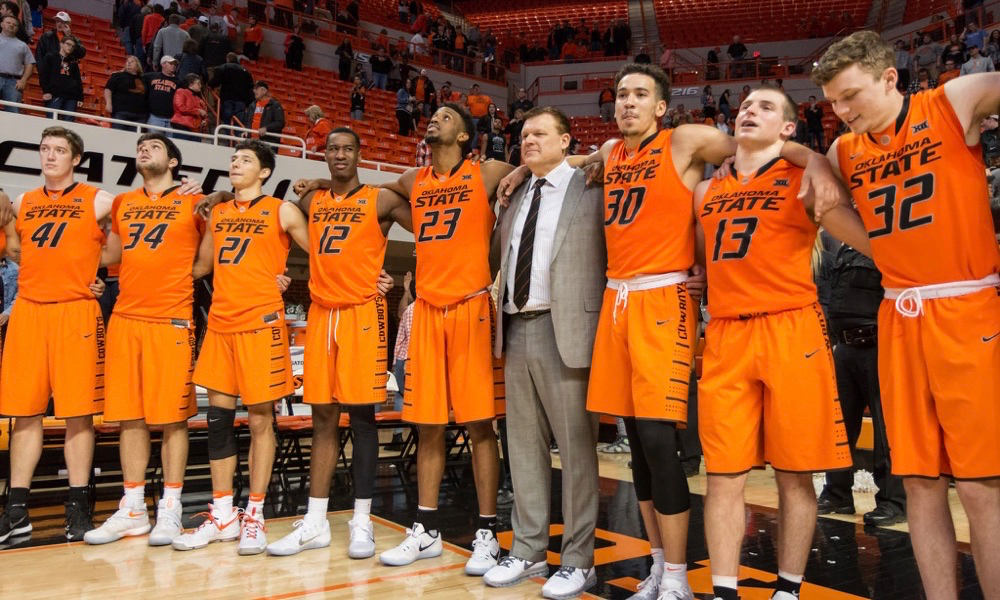 Five weeks ago, a winless (in conference play) Cowboy team walked into United Supermarkets Arena in west Texas resolved to win. After seeing five straight losses in close games, frustrations were mounting but wheels were turning and something good was bound to happen.

Like their neighbors in Norman had done a week before, the Cowboys were able to break 80 points with a win over a solid Texas Tech team and inject some much-needed confidence into their game.

Today the Red Raiders find themselves in a similar place as OSU did: losers of six (of their last nine) and besides a recent home win against Baylor, a haunting inability to close.

With three games to go, Texas Tech (17-11, 5-10 in Big 12) finds their Big Dance hopes on life support in much need of a first (and signature) conference road win. More seasoned than a struggling OU team that gave the Cowboys all they could handle a week ago, OSU can’t mail it in against the Red Raiders who will bring plenty of motivation today.

There’s a massive hump the Red Raiders can’t get over but all the close games (and the Baylor W) show they’re more than capable. It came down to the wire in an overtime bout on Monday against Iowa State. Tech won all the hustle battles forcing turnovers (12 to 6) and out-rebounding the Cyclones (37 to 33). Unfortunately, the offensive talent of the second-place Cylcones was just too much after draining 12 threes (shooting .500) and guard Monte Morris dropping six dimes with his 23 points.

Iowa State’s head coach had very high praise for this Tech team calling their win in Lubbock their best road win of the year after winning in Lawrence earlier this season.

After going down by double-digits in the last couple of games, the Pokes have stormed back to win-similar to what teams were doing to them in the first third of the conference schedule.

In their last game, every time the Red Raiders closed the gap, Phil Forte would hit it from the panhandle of Texas (on the mid-court logo). Clip and Forte combined to go eight out of nine from deep and all of our worries of another road collapse drifted away.

For a middle-of-the-road Tech scoring attack (70.3 points per game in league play) to catch a juggernaut OSU offense (currently no. 1 in the country in offensive efficiency) slowing down the onslaught of buckets.

The Tech faithful lament when seeing potent three point shooters: Iowa State’s Matt Thomas made it rain shooting five for five against the Red Raiders on Monday and TCU sophomore JD Miller went four for four in a close win against Tech earlier this month.

Opposing teams are getting 36.6 percent of their points from deep against the Red Raiders, the 21st highest number in college basketball. Don’t be surprised when head coach Chris Beard does all he can to keep the Cowboy shooters off the three point line.

Something that’s really hurt Tech lately has been the rebounding battle. Texas Tech consistently loses the battle on the glass (-2.9 average rebounding margin) and with less than stellar shooting percentages (50.3 percent), those extra opportunities are crucial for Tech to stay in close games.

Alternatively, OSU has done a really good job using rebounds to run up points (see fantastic piece by Kyle Cox here). The Pokes allow the second lowest amount of rebounds in the league (31.7 per game), primarily because of their elite offensive rebounding.

Knowing that preventing this isn’t a strength of Tech’s defense, count on King Solomon to rule the paint again this week.

Here’s some good insight into the method behind the madness.

If you’re considering the biggest difference between Travis Ford teams and Brad Underwood teams, lots of things may come to mind. A game plan, ability to extract talent from role players and offensive structure come to mind.

But more than anything, this Cowboy team is dripping with confidence regardless of circumstances. Down 14 on the road? Who cares. Defensive lapses against biggest rival? No problem. This Oklahoma State team is closing like a team who’s been there and done that, like a bunch of midwestern Mariano Riveras.

And unfortunately for them, Texas Tech is about the opposite.

But my goodness, take a look at their last five, aka the murderer’s row portion of the Big 12 schedule: home against Iowa State, at West Virginia, home vs Baylor, home against KU and at TCU. Those are good ball teams and the Red Raiders have seen three rounds of overtime and are losing by an average of 3.5 points in the six losses.

Overconfidence hasn’t bitten us yet, but it’ll be important to avoid playing a Tech team that’s smart with the ball (+ 1.7 turnover margin in league play) and at hives-level itching to get a win.