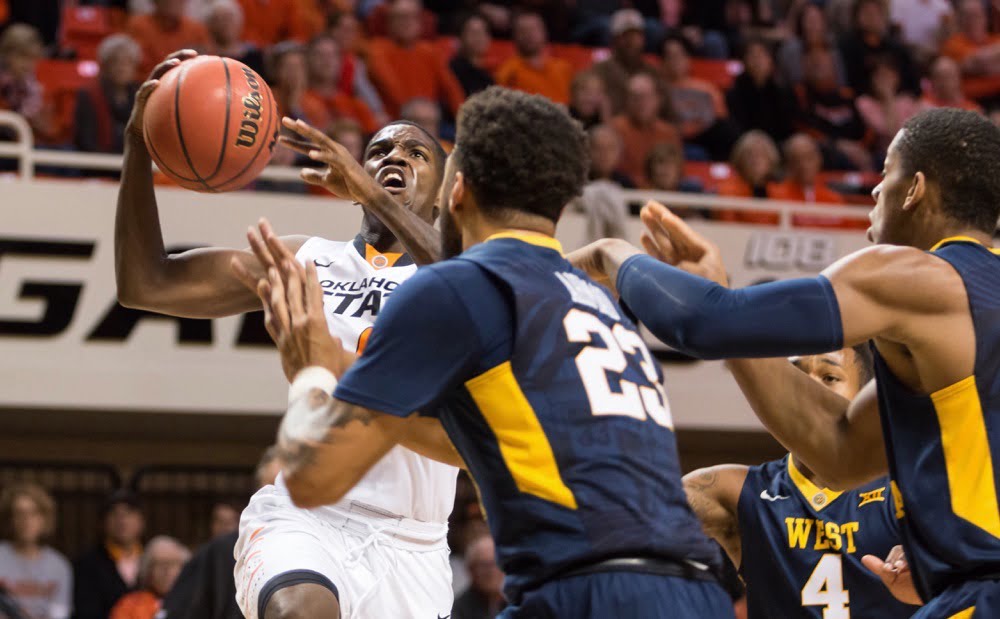 The Pokes head back east on Saturday to take on the No. 7-ranked, third place in the Big 12 West Virginia Mountaineers. Head coach Bob Huggins joined Eddie in the prestigious 800 win club this season and his high-pressure system is a proven winner.

A complete team, the Mountaineers are one of two teams in KenPom’s top ten of offensive and defensive efficiency numbers and year three of “Press Virginia” has been a success.

West Virginia is hard to pin down after they beat up on the top two teams in the league (then No. 1 Baylor Bears and No. 2 Kansas Jayhawks) only to lose to last place Oklahoma at home and held on for a two-point win over ninth place Texas. While it’s not what it was under Fred Hoiberg, Iowa State’s Hilton Coliseum is a tough road venue and West Virginia came in to give them their worst home loss of the season on Tuesday (by 13). The Mountaineers throttled Iowa State from deep, shooting 48 percent while pressuring the Cyclones into an icy 29 percent shooting in the second half.

Big man Nathan Adrian went for a career-high 23 points while securing 11 rebounds and West Virginia forced 16 turnovers on the road to beat the Cyclones.

The sophomore forward is the young gun in the starting lineup (between two seniors and two juniors) and at 6’8″ he attacks the rim better than anybody on the team. He generally leads the team in scoring and went off for 27 against KU leading the way.

He’s got good size and has the best effective field goal rate on the team (53 percent). He’s a pretty high usage player (using between 20-24 percent of possessions) and can be turnover prone at times (1.7 per game) but is a well rounded player that fits their defensive scheme well.

The straw that stirs the drink if you will, Carter runs the point well and averages 5.2 assists per game in league play. He’s got a solid 2.6 assist to turnover ratio and knocks down 1.5 threes each game providing some spark offensively.

With multiple five steal games this year (leading the league with 3.0 steals a game), he’s likely the most accomplished pick pocket we’ll see on the year. He’s rumored to be one of the top defensive players in the country.

He’s also rumored to be coming for Perry Ellis’ spot as oldest Big 12 player as well:

He played lock-down defense on Iowa State point guard Monte Morris earlier this week and held Frank Mason of Kansas to 37.5 percent shooting. He could be trouble for No. 1 in the orange and black.

This move by Jevon Carter>> pic.twitter.com/KwJEgiz8sI

It’ll be a tall task for the Pokes to come back from the eastern time zone with a W on Saturday. The ‘Neers in a lot of ways just look like a more mature and developed version of the Cowboys (KenPom stats below tell it well). But they’re are some encouraging signs.

West Virginia doesn’t do a great job on the defensive glass (pulling down only 35 percent of rebounds), so look for lots of second chance opportunities for the Cowboys. WVU has struggled lately to hold onto leads, blowing them against KU, Tech, K-State, OU and Texas A&M this past weekend. After being down 13 with 2:36 to go, A&M was able to pull it within two late. Part of this has to do with their poor free throw shooting (eighth in the league shooting 66 percent) and the earlier mentioned tendency for teams to get second shots.

Now strengths? Huggins has this team where Underwood is likely to have his in a year or two with the best turnover margin in the league (plus 10.6 per game) and leading the league in steals (11.6 per game). The offense hums off of transition buckets and a diversified attack featuring five players averaging at least nine points a game.

They have the no. 3 most efficient offense in the country by KenPom and are just in front of the Pokes as they lead the league with 87.6 points each game. It’s an unselfish bunch leading the league with 16.8 assists each game. Our best hope is if we’ve really progressed against the press limiting turnovers and have a solid night shooting from deep (think Texas Tech on the road not at OU).