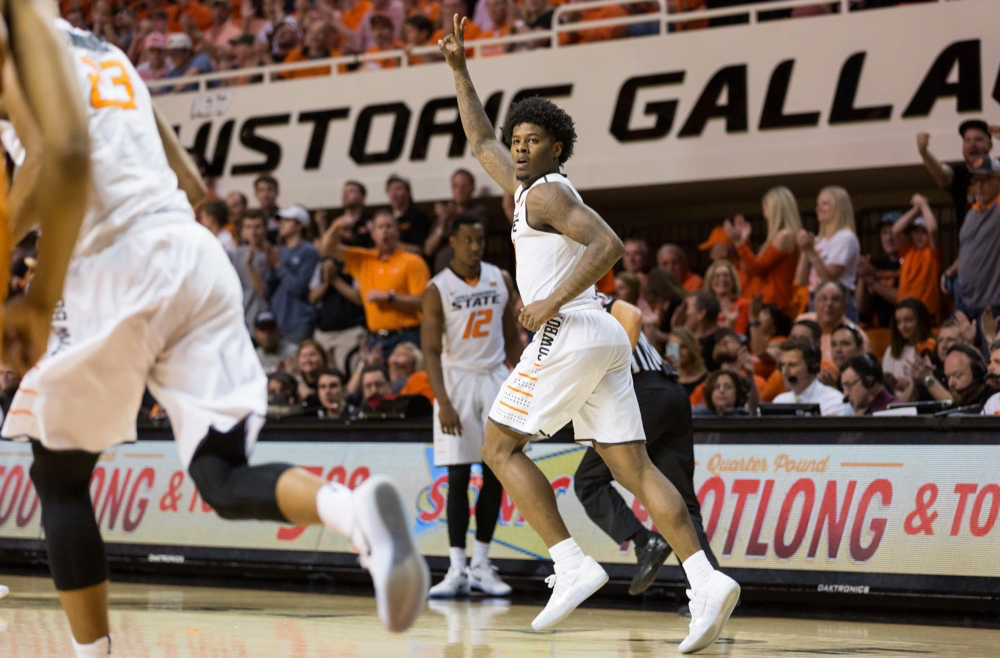 Bill Self and the Jayhawks have walked into a quieter GIA in the past against less-talented Cowboy teams and walked out with a loss.

The no. 1 ranked Kansas Jayhawks (27-3, 15-2 in league play) have clinched their 13th straight title, the number one seed in Kansas City and the best shot of every team they play.

And apparently the numbers bear out that this should be a pretty good game.

The undisputed reigning kings of the league have some jewels in their crown: Duke, Kentucky and 15 Big 12 wins. OU was up 12 on Kansas at the Phog with ten minutes to go earlier this week. Through 75 percent of the game, OU held a double-digit lead on senior night in Lawrence. What a world.

KU was struggling mightily on the offensive end, playing turnover-prone and impacted by the solid Sooner rim protection. The Jayhawks were on pace to score a meager 56 points (42 points through 30 minutes of play) until guard Devonte Graham nailed some crucial threes and the Jayhawks finished the game on a 31-11 run.

Senior guard and national player of the year candidate Frank Mason led all scorers with 23 points and received high praise from head coach Bill Self before the game as he was called “the best guard (Self) ever coached.” It was another painful late game fade for the young Sooners who somehow built up their lead shooting only 25 percent in an ugly turnover-laden first half.

It’s Marcus Smart backflips. It’s Ostertag-Big Country. John Lucas and the 04′ team blowing out KU on Big Monday and making runs in Kansas City. This year it’s elite, undersized point guards throwing down while Dillard and Solomon take on a diaper dandy headed for the lottery. Two of KenPom’s top five offenses and four of the five leading scorers in the conference make for must-see TV.

The Phog and Gallagher-Iba are two of college basketball’s most storied venues. James Naismith invented basketball and Henry Iba the man defense. Eddie Sutton and Roy Williams facing off in the Big Eight were classics. Travis Ford was Bill Self’s kryptonite but the broad-shouldered K-State grad at the helm seems like an apt addition to the rivalry.

I’d be all for playing the game in Wichita (midpoint), maybe calling it the Arkansas River Rivalry? Neosho Showdown? (both are rivers between Lawrence and Stillwater). KU has more national prominence, but you can’t convince me it’s not a rivalry.

The last time they met, the Pokes were a wounded dog bearing the baggage of a four-game losing streak. It’s a different story in Stillwater nowadays and a big reason for that is the production from role players. Mitchell Solomon played beautifully in Lawrence, unafraid of the the plethora of five-star talent roaming the paint and punishing defenders who dare defy him.

Even more surprising on January 14th was the emergence of Davon Dillard. It just didn’t feel like things were working out with the talented sophomore … then Kansas happened. Six points, eight boards, three assists and one block on a lottery pick that should have been.

He found all the confidence in the world after that, throwing down windmills and put-back slams, getting some iso action on offense and all while playing solid defense.

The pair has shown more than capable to provide offense, specifically that day in Lawrence when Jawun and Phil were cold. But their primary service to the team is what they bring defensively. 6’10” Landen Lucas and 6’8″ Josh Jackson are difference makers inside and making sure they don’t run wild is an important task. Solomon and Dillard will have to play smart help-defense on penetrating Jayhawks – a 45 to 14 free throw number was impossible to overcome in the first meeting.

You can count on Phil building on his three-point record on Saturday and let’s enjoy every moment with Jawun like it’s our last, but keeping Solomon in the game and Dillard with a cool head will be crucial for a win on Saturday.

Leyton Hammonds, Phil Forte and (possibly) Jawun Evans are suiting up for the last time in Gallagher-Iba Arena and the place will be lit. The game has been sold out  for a couple of weeks and that 5 p.m. tip should lend to a fiery environment.

What’s most worth highlighting was something that Larry Reece mentioned this week on the podcast, that Eddie and the Cowboy faithful willed the Pokes to a win over Mizzou after the 2001 plane crash.

Granted the conditions were significantly different but the capability is there. It’s teased itself at times this year against OU, Arkansas and a ferocious four minute stretch against Baylor. She’s done it before, it’ll be fun to see if it happens again.