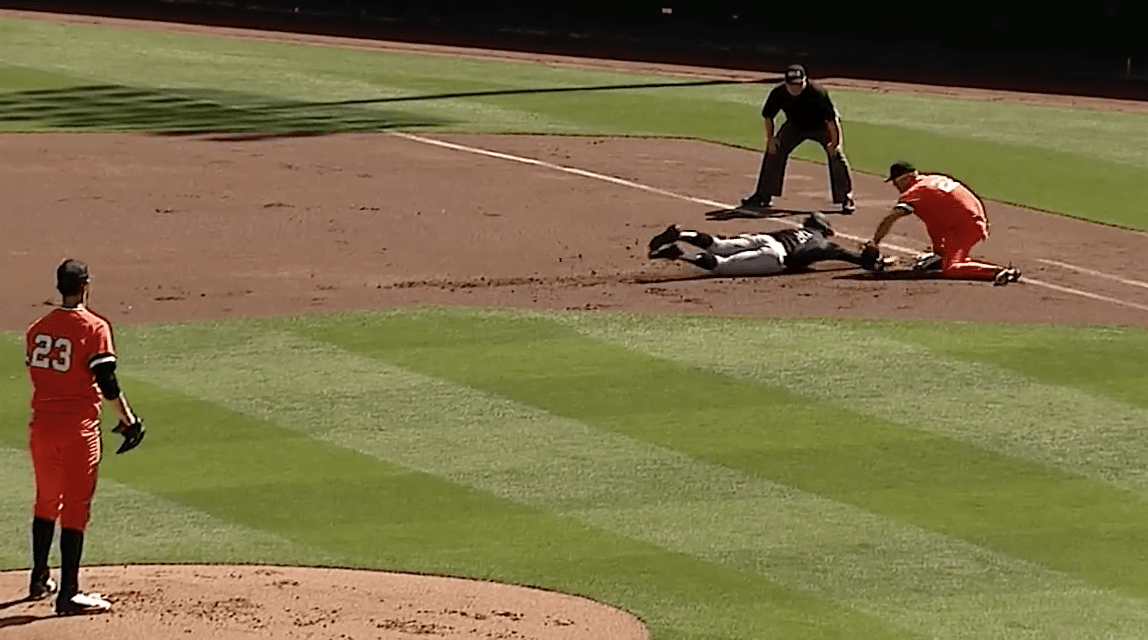 Michael Freeman picks off a Grand Canyon runner (via YouTube).

A perfect week has boosted OSU’s confidence heading into a big non-conference matchup and a huge start to conference play.

Here’s a look at where they stand in the national polls, some info on the upcoming game against Central Arkansas and three things to watch this week.

OSU closes this home stand with a visit from Central Arkansas, who arrives in Stillwater on an eight-game winning streak.

It’s a chance for redemption for coach Josh Holliday: Central Arkansas won 11-3 in the most recent meeting in 2013, Holliday’s first year as OSU’s coach.

The Bears are a fundamentally sound team: they have one of the best fielding percentages (.980) and on-base percentages (.407) in the country. Oh, and the pitching staff (2.95 ERA) isn’t bad either.

Coach Allen Gum had this team one win away from upsetting Mississippi State and going to a Super Regional in 2013, and has similar characteristics to Holliday.

Both are young coaches who are relatively new to their respective programs, but bring energy and coaching smarts to a talented group of kids who are finding success.

This will be a good matchup for the Cowboys before traveling to Fort Worth to start conference play. If OSU is already looking ahead to the weekend, the five-game winning streak will be in jeopardy.

1. I said a few weeks back that scoring the first run was important, and that seemed to be a focus for the team last week. In five games, OSU scored 26 runs in the first three innings. Those five games also turned out to be five wins.

The Cowboys are now 11-2 this season when scoring first. I think they get a mental edge knowing they’ve got a lead and great pitching staff. I’m curious to see how they will do against TCU this weekend, especially if they get early runs on TCU’s amazing pitching staff.

2. If we’ve learned anything in Holliday’s two-plus years here, it’s that his teams get better as the season progresses, and that trend is evident in this year’s squad as well.

The difference between February and March is night and day:

A huge part of this successful month has been the pitching staff, and nowhere is that more apparent than the success of Michael Freeman and Tyler Nurdin. Freeman is 2-0 with a 0.45 ERA and a 21:2 K/BB ratio this month, while Nurdin earned his first win in 10 months and hasn’t allowed a run in seven innings.

If they both continue this pace, and with Jon Perrin starting to hit his groove, this could be a starting rotation that no team wants to face.

3. It’s finally upon us: conference play begins this weekend for the Pokes with the toughest challenge on the schedule: TCU. The Horned Frogs are arguably the best team in the nation (No. 1 in three of the five national polls) and swept Baylor last weekend.

This will be a huge challenge for Holliday and OSU, but a series win would put the Cowboys in the driver’s seat for the conference title.

Come back to PFB on Friday morning for a preview of the OSU-TCU series.