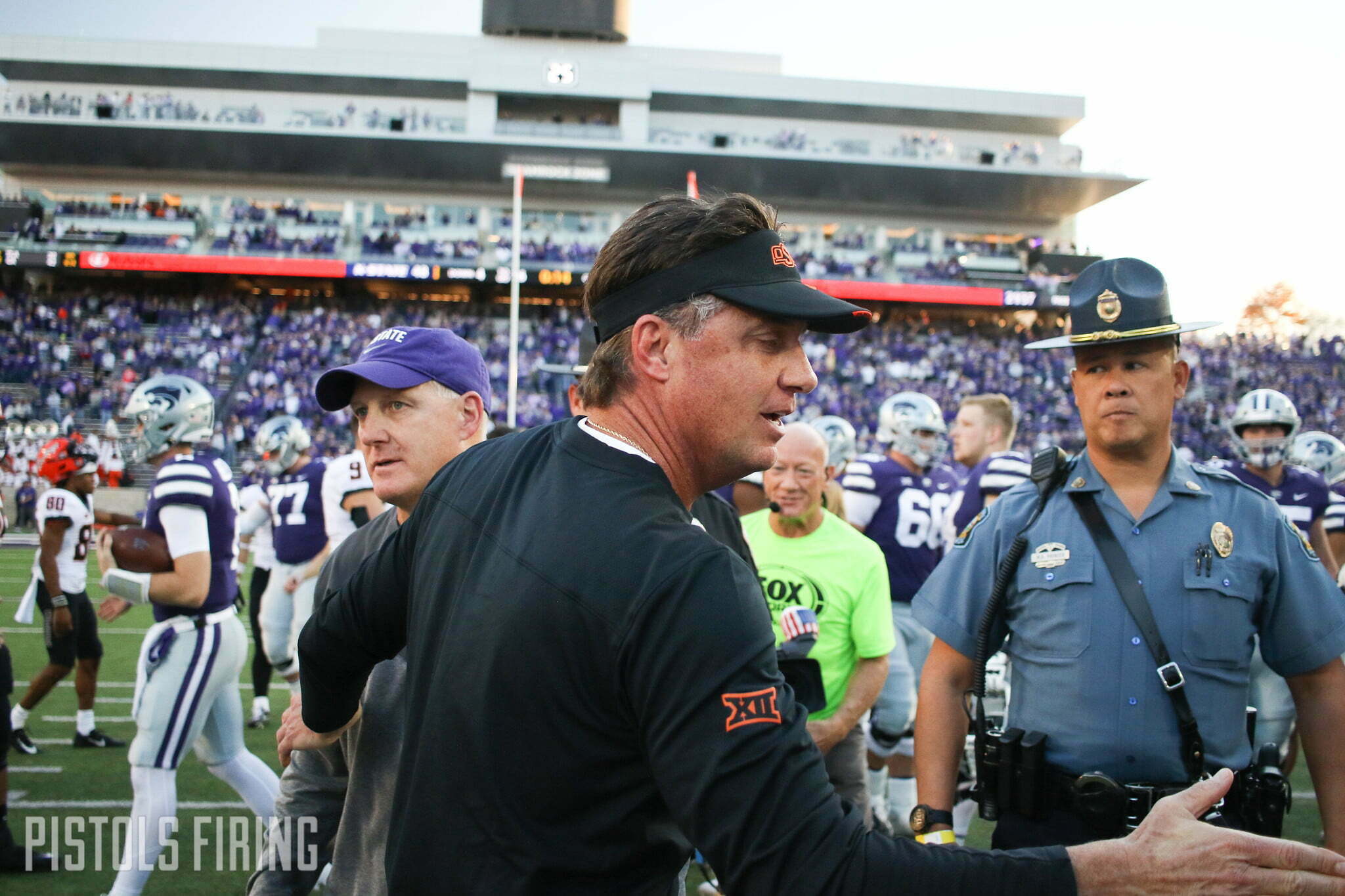 The 48-point shutout was the largest point differential a Gundy team has ever lost by, and it’s just the third time a Gundy team hasn’t scored a point. Perhaps the most head-scratching part is that it came when the Cowboys were a Top 10 team in the country.

But, as Gundy said after the massacre in Manhattan, it isn’t the first time he has gotten his butt kicked. It doesn’t happen all that often, but with OSU heading to Lawrence this weekend for a game against Kansas, I thought it would be interesting to look back and see how Gundy-led teams responded to blowout losses.

Anything that happened in 2005 — Gundy’s first season — needs to be taken with a grain of salt. It was a rebuilding year and the only year in Gundy’s tenure the Cowboys didn’t make a bowl game.

With that said, after getting torched in College Station, the Cowboys didn’t fare much better the next weekend in Ames. Al Pena threw four interceptions and no touchdowns in the 37-10 loss. At one point in the first quarter, OSU had a 10-7 lead in this game thanks to a Bruce Redden field goal and a Julius Crosslin touchdown before the Cyclones scored the next 30 points of the game.

With Graham Harrell and Michael Crabtree, the Red Raiders had perhaps their best team ever in 2008. En route to a Cotton Bowl appearance, Tech blistered the Cowboys in Lubbock 56-20, but Gundy’s Pokes bounced back.

Going to Boulder the next weekend, Zac Robinson led the Cowboys to a 30-17 win over Colorado.

This is the game where Mason Rudolph was injured and the Sooners ran all over the OSU defense to the tune of 344 yards on 8.2 yards a carry.

Again, 2005 qualifier aside, OSU got shutout 34-0 against Colorado before Missouri came to town and the Pokes put up a good fight. Missouri ended up winning this game 38-31 and went on to win the Independence Bowl this season.

Redden was having his Heisman moment in this game, hitting field goals from 48 yards, 28 yards and 52 yards all in the first half. The Tigers built to a 31-9 lead in the third quarter before the Pokes made it look closer with two Crosslin touchdowns and a D’Juan Woods receiving TD.

There are bigger point differentials, but I wanted to include this game because it was the last time the Cowboys had been shutout.

After falling 27-0 in the 2009 rendition of Bedlam, the Cowboys had a date with Ole Miss in the Cotton Bowl. If you take anything from this list its that if OU blows OSU out and then OSU has to play Ole Miss, it probably isn’t good.

This was an interception fest of epic proportions, as both teams threw four. Keith Toston, a running back, had the only passing touchdown in the game. Dexter McCluster had 184 rushing yards and two scores for the Rebels, leading Ole Miss to a 21-7 victory.