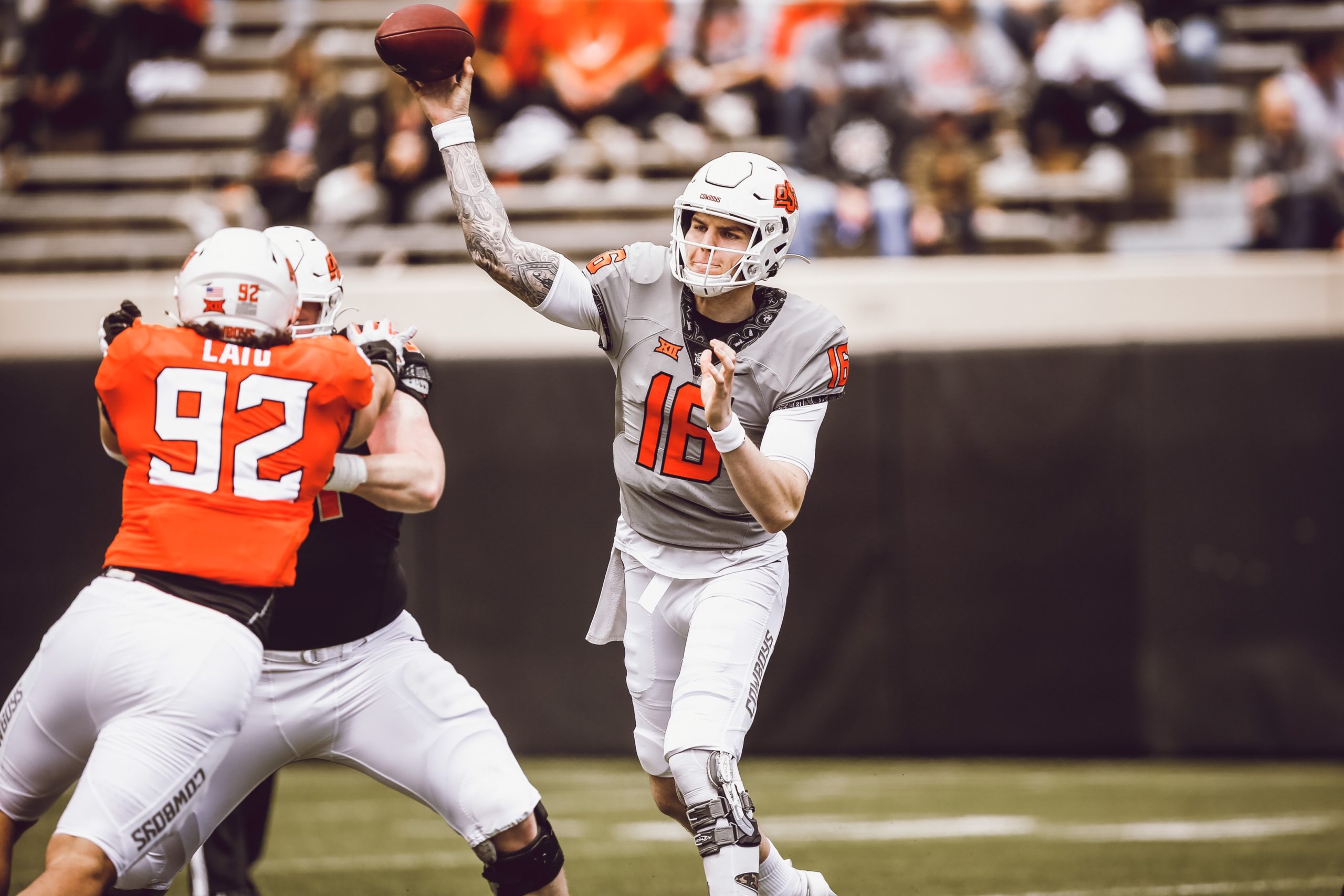 With last year’s spring ball getting shut down early, Shane Illingworth got pushed into the spotlight prematurely, but he handled it well, all things considered.

Illingworth showed the progression he has made in Oklahoma State’s spring game Saturday, throwing for 236 yards (unofficial) and two touchdowns. Illingworth said having the full spring has helped him “tremendously,” crediting quarterback coach Tim Rattay.

Illingworth, now entering his sophomore season as an Oklahoma State quarterback, graduated from Norco High School (CA) early to enroll at OSU in January of 2020. However, just three practices into his spring camp, the COVID-19 pandemic shut everything down.

He then missed the latter days of the Cowboys’ fall camp because of contact tracing and nearly didn’t dress for OSU’s season opener against Tulsa, a game he was thrusted into after a Spencer Sanders injury.

He saved OSU from embarrassment in that game, going 4-for-5 with 79 yards to lead OSU to a win. Then in a pair of starts against West Virginia and Kansas (both wins), Illingworth combined to go 32-for-44 for 404 yards, three touchdowns and an interception.

Illingworth’s greenness showed in some spot work in Bedlam, though, as he went 5-for-21 for 71 yards and a touchdown. Yet still, considering he essentially got thrown from California high school football to Big 12 football, it was a promising start to the 6-foot-6, 230-pound pocket passer’s career.

After Saturday’s Spring Game, OSU coach Mike Gundy said the Cowboys’ quarterbacks were hurt most for not having spring ball last season.

“Different teams may feel differently, but for us, the number of reps that our quarterbacks get in our system where we program what happens in practice, we can set it all up, can set you back at that position,” Gundy said. “… For that position to be able to get that work because we have enough linemen to practice, you just can’t make up for it. It’s a big advantage for our team.”

Illingworth enters 2021 as OSU’s QB2, but that has been an important position for the Cowboys in recent seasons. As fun as Spencer Sanders’ lay-it-all-out-there style is to watch (and it is), he has had to miss games in each of the past two seasons with injuries.

“I think we can all agree, I gotta get a little faster,” Illingworth said. “I gotta work on my speed. I gotta keep on clicking through my progression. Where I make my money is going to be in the pocket. I’m going to have to do that. I’m just going to continue to get better at that, but I gotta keep on working my athleticism, my speed — make 10 yards when I need to get 10 yards.