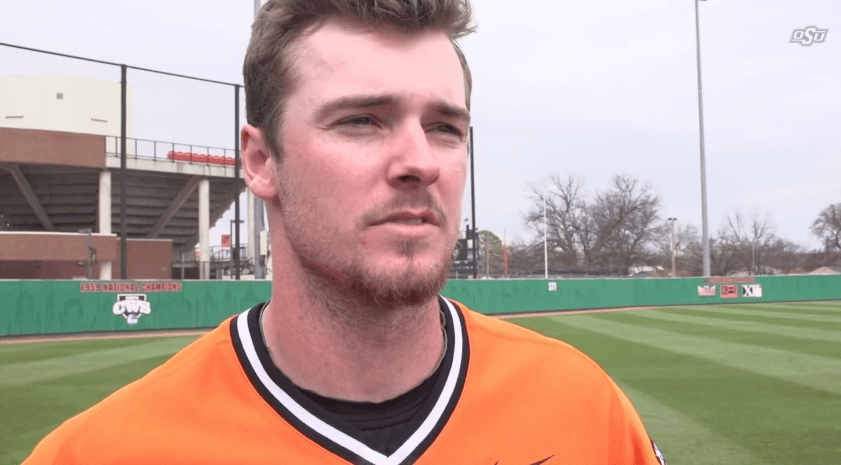 Conor Costello talks about OSU’s series against Illinois over the weekend. (via YouTube)

It’s gonna be a busy week for the Cowboys.

Here’s a look at where they stand in the national polls, some info on the upcoming games against Alcorn State and my three things to watch this week.

The Cowboys host Alcorn State for two games this week, which should give Josh Holliday a chance to build some momentum.

These two met in Stillwater twice last year with OSU winning both games by a combined 33-5.

The Braves have already committed 53 errors this season and have the worst fielding percentage in all of Division 1.

The pitching staff also has an astronomically high 7.40 ERA, which would be even higher if not for the 47 unearned runs allowed this year.

These two games won’t do much for the Cowboys’ strength of schedule, but adding a few to the win column will be welcome relief for OSU.

I thought that was a large discrepancy, and thought maybe there were fewer hits in the losses. There are, but only 2.5/game less than in wins, which doesn’t seem to make up almost six runs per game.

I thought maybe the Cowboys are leaving too many runners on base in losses. Turns out, they actually leave more on base in wins (9.0/game) than losses (7.3/game). So what could it be?

One stat jumps out at me: OSU is 7-2 this season when scoring the first run, but 1-4 when allowing the first run. This could just be a mental problem of falling behind early and digging the proverbial hole too deep at the start of games.

That’s something that will need to be correct with Big 12 play just a few weeks away.

2. From what I’ve heard, junior shortstop Donnie Walton was given a 2-3 month timetable for a return from a wrist injury.

If true, that means Walton could still miss another 1-2 months. We might see him as early as the Baylor series in mid-April. We might not see him until the Big 12 Tournament. Two things to consider:

I don’t think he’ll leave early for the draft now. At the start of the season, I said he might declare if he had a fantastic season. But at this rate, he won’t have much of a season at all, and I don’t think he wants to leave OSU on those terms.

Jacob Chappell has really struggled in Walton’s place. He’s hitting just .200 on the season, and leads the team with five errors. He’s struck out 12 times and only has eight hits in 40 at-bats. The Cowboys are really missing Walton, and I wonder if they stick with Chappell at short until Walton returns healthy.

3. This is the last weekend without Big 12 play until the final weekend of the regular season, so the coaching staff will be looking to lock the best players into starting spots before conference series begin.

For guys like Tyler Nurdin, Trey Cobb and Conor Costello, they’ll be looking to correct whatever has ailed them in slow starts to the season. And for guys like Bryan Case, Garrett McCain and Carson LaRue, it’s a chance to continue showcasing what has earned them this much playing time already.

Keep an eye on how Holliday rotates players in throughout the five games this week.