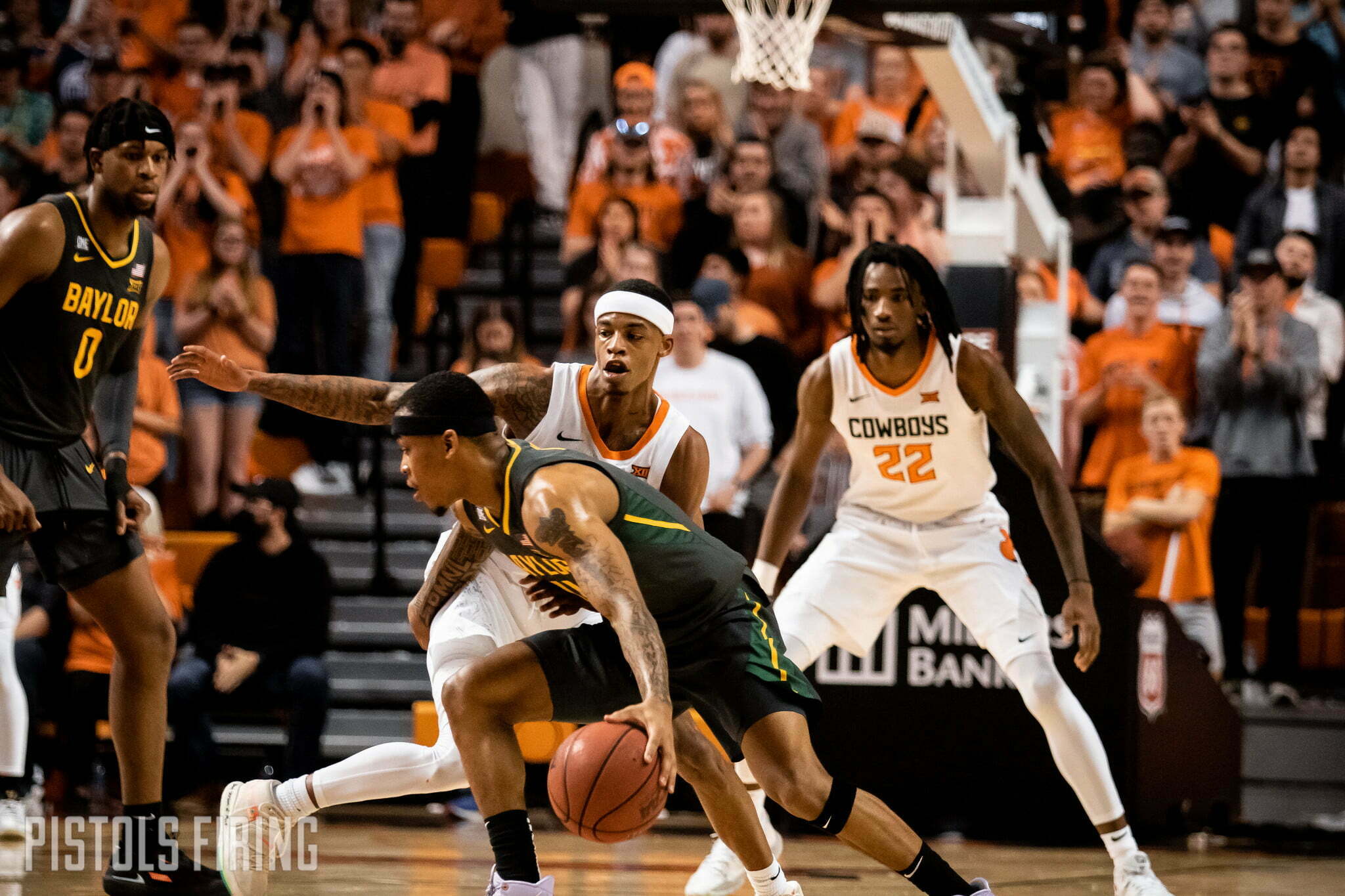 With 0.7 seconds left in regulation of Monday night’s tilt between No. 10 Baylor and Oklahoma State inside Gallagher-Iba Arena, Isaac Likelele heaved a prayer over the side of the backboard that dropped in the bucket and gave the Cowboys a 62-60 advantage. The bucket, however, came just after the shot clock expired, a so close moment that in many ways was representative of OSU’s fight against Baylor that ended in a 66-64 losing effort in overtime.

OSU no doubt had its chances to complete the season sweep of the Bears, from the Likekele shot to a missed Bryce Thompson 3-pointer late. You could even point to the dry spells on offense as reason why Baylor escaped. It all mattered. All of it combined eventually added up to an already-uphill battle for the underdog Pokes, who could not get out of their own way enough to steal a win.

That’s not to say the game itself wasn’t a thriller. It was. Despite failing to score for the first five minutes and 16 seconds of the game, OSU found a groove and rallied in the first half. Early turnover troubles gave way to impressive ball movement and an offensive avalanche that gave it a 36-29 lead at the half.

Everything seemed to be working and GIA was, as the kids say, absolutely lit, and this Bryce Thompson to Moussa Cisse connection helped ignite the fire going into the second half.

The Cowboys eventually ran out of gas, though, and it happened as Baylor guard Adam Flagler, meanwhile, was fueling up. (OK, no more fire metaphors. You get it.) Flagler matched a career-high with 29 points in the win and had 14 in the second half. It came as OSU shot 20% from 3 in the second half and overtime combined and lost the turnover battle in that span 11-5.

OSU wearing down late may be the accumulation of a lot of close games, too, including an overtime win that came Saturday against Kansas State. Monday marked the fifth overtime game of the season — the most in a season in program history — and moved OSU to 9-3 overall in OT games in Mike Boynton’s tenure.

As ugly as it was, that it was close at all against a top-10 team is pretty remarkable given the quick turnaround from the weekend. It was an evenly-spread effort to push Baylor to the brink of defeat with four players — Bryce Thompson (15 points), Avery Anderson (10 points), Isaac Likekele (12 points) and Moussa Cisse (12 points) — all scoring in double figures.

What’s next is finally a bit of a reprieve on the schedule: OSU gets the remainder of the week to rest and recharge from consecutive overtime games before facing Oklahoma on Saturday with a chance to sweep the Bedlam series. The Sooners have lost six of their last seven and are 4-11 in the 2022 calendar year. A win would move OSU to .500 on the season with only two games left on the schedule for the season.