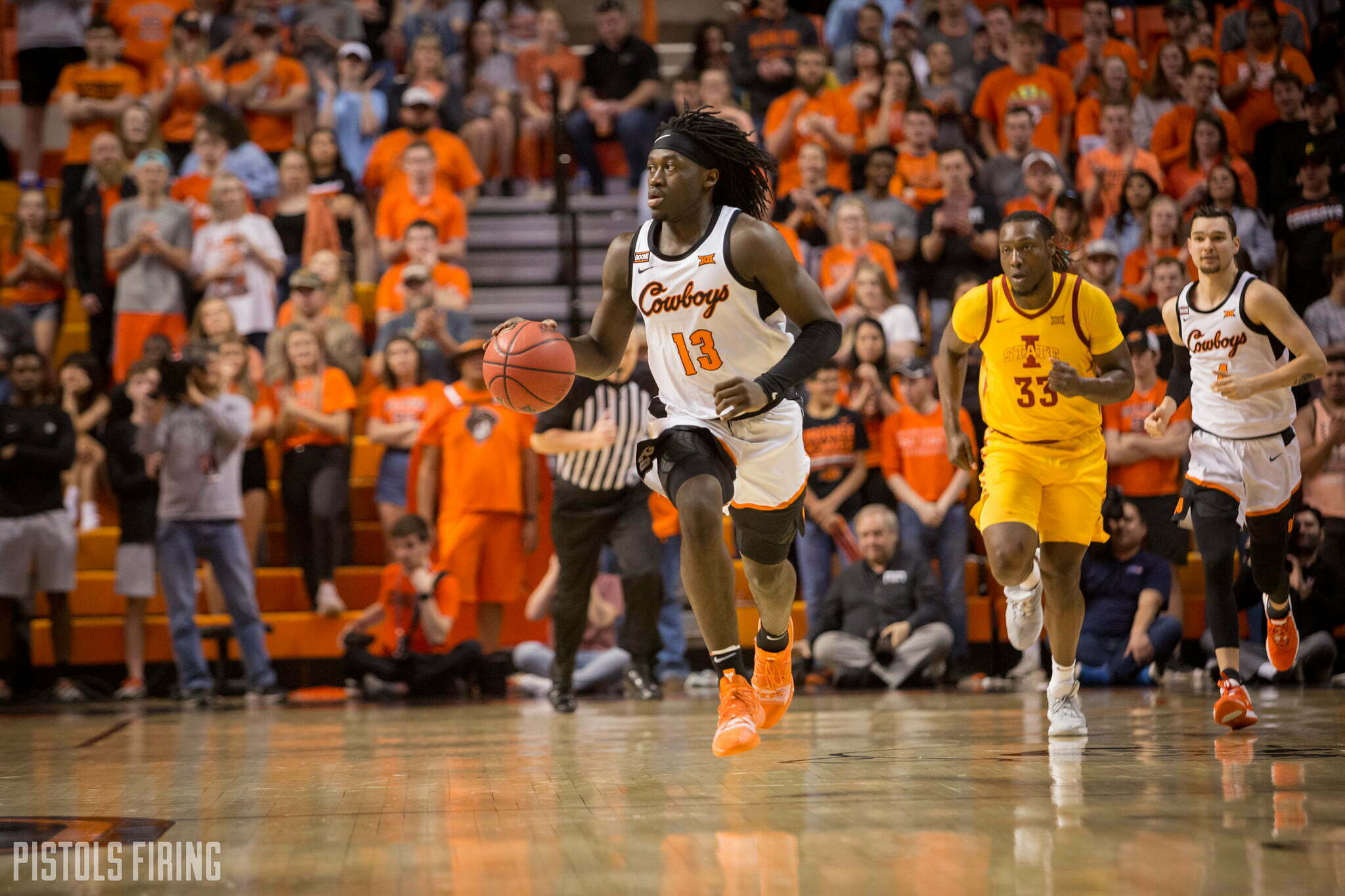 As cool as his nickname, Isaac Likekele ran with floor with seconds ticking to send the Cowboys to the quarterfinals.

Oklahoma State beat Iowa State 72-71 in the first round of the Big 12 Tournament in Kansas City after a chaotic finish. With nine seconds to go, Iowa State guard Terrence Lewis put Yor Anei on the floor and gave the Cyclones the lead with a monstrous slam dunk.

OSU had no timeouts. Avery Anderson quickly grabbed the ball on the baseline and got it to Likekele. With Lewis still flexing at his bench, the one they call Ice sliced through a land run of bodies headed to the Iowa State basket. Likekele laid the ball off the glass and in with 3.8 left on the clock. Iowa State was unable to get a shot up at the buzzer.

The Cowboys probably made it more difficult than it needed to be, but Likekele and Cameron McGriff were able to get the Pokes across the finish line and into the next round. Likekele again stuffed the box score with 21 points, five rebounds, nine assists, a block and three steals. McGriff scored 17 points (his 13th straight game in double figures) and had eight rebounds.

The Cowboys shot above 50 percent for much of the night (finished at 49 percent), but the Cyclones almost took the game from the Pokes somewhat literally. Iowa State forced OSU into 13 turnovers, 10 of which came in the first half, and the Cyclones brought in 13 offensive rebounds for 18 second-chance points. OSU had just two second-chance points, but they were big ones.

With less than 30 seconds to go and OSU down 69-68, Lindy Waters missed a would-be go-ahead jumper, but Yor Anei skied and got an offensive board. He got the ball to Likekele who was fouled. Likekele made both foul shots, giving OSU a 70-69 lead ahead of the madness that was the game’s final seconds.

Without star guards Tyrese Haliburton and Rasir Bolton because of injury, Prentiss Nixon erupted for 25 points for the Cyclones. Nixon was listed as questionable earlier in the week with an ankle injury.

The Cowboys led 34-32 at the half thanks in large part to a late 15-4 OSU run. It seemed as if Iowa State might’ve been on blowout watch, but ISU coach Steve Prohm’s halftime speech must have resembled that of George Washington’s before the Battle of Saratoga.

Iowa State started the second half on a 15-4 run, which included a 7-0 run Nixon went on by himself.

In the final 10 minutes, only three Cowboys scored: Likekele, McGriff and Anei. The trio went on an 8-0 run that put the Cowboys within a point with 5:53 to go. From there, Iowa State would make a shot, and OSU would pull back to within a point with a pair of free throws. That sequence happened five times before OSU finally got over the hump.

Anei had a sneaky good game behind Likekele and McGriff. OSU’s center scored 12 points on 5-for-7 shooting and had five rebounds.

The Cowboys will play top-seeded Kansas at 1:30 p.m. Thursday in Kansas City. The teams will play with limited people in the arena, as the Big 12 announced that each team would be given only 125 tickets with the COVID-19 outbreak.