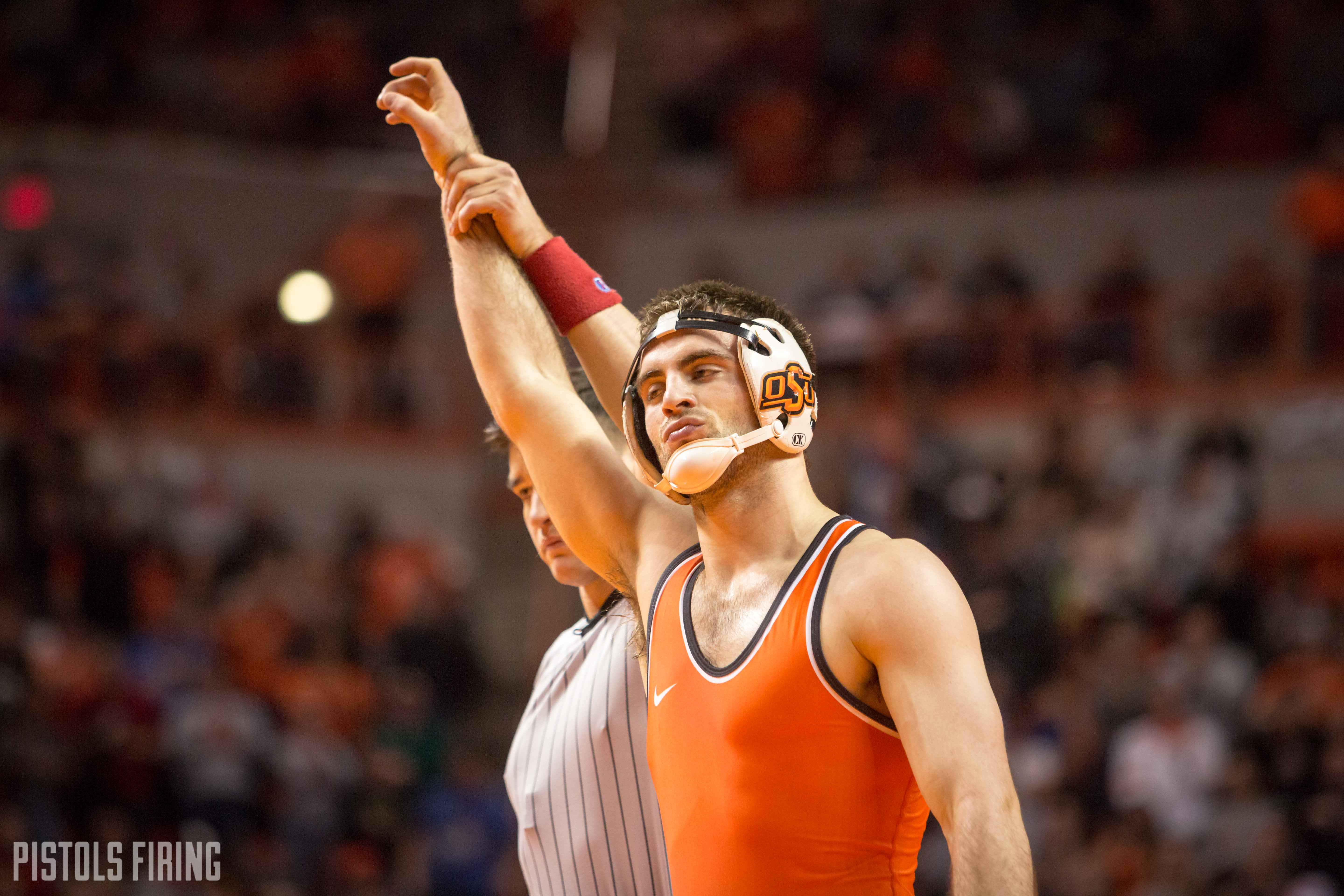 The No. 2 Oklahoma State wrestling team defeated No. 3 Iowa 27-12 on Sunday afternoon in front of 13,811 Gallagher-Iba Arena fans. Here’s a look into the action.

In one of the featured matches of the afternoon, OSU 125-pounder Nick Piccininni caught Spencer Lee in a second-period cradle on the west edge of the mat and scored a fall in the dual’s first match.

The result sent Gallagher-Iba into a frenzy, as it was hard to even hear the public address announcer declare Piccininni victorious.

Piccininni entered the day ranked fourth in the country, and Lee is ranked second. The two had met two times, both going Lee’s way. The result pushed Piccininni to 27-0 this season, as Lee fell to 16-2.

“I can’t describe (my emotions),” Piccininni said, “They’re undescribable. It’s just what’s built up inside you. Fans got loud, the crowd was cheering, and I knew it was big for our team to start that off. Obviously, if you start off with six points, it’s always gonna carry over. I just knew it was something big.”

The premier bout of the day at 133 between No. 2 Daton Fix and No. 3 Austin DeSanto wasn’t quite as action packed as the 125-pound match, but it too had the GIA crowd going wild.

DeSanto’s extracurricular antics have been well documented, and the crowd was well aware, booing him as he entered the circle.

The first period ended scoreless, and Fix scored an escape point in the second. Fix rode DeSanto like the 2006-07 Cavs rode Lebron to the finals. Fix was on DeSanto’s back with his legs hooked over DeSanto’s hips and wrapped back around to his hamstrings. Much of DeSanto’s third-period view was a direct look into GIA’s orange mat.

Rogers Goes Up a Weight and Scores a Fall

Chandler Rogers entered Sunday ranked 10th in the country at 165 pounds, but he walked on the mat opposite Iowa’s 174-pounder Mitch Brown.

Any weight difference didn’t matter, as Bowman was Iowa’s only unranked wrestler. Rogers entered the third period leading 6-2 before scoring a fall on his senior day.

With the regular season wrapped up, the Cowboys will be back on the mat next in the Big 12 Championships on March 9 and 10 in Tulsa.