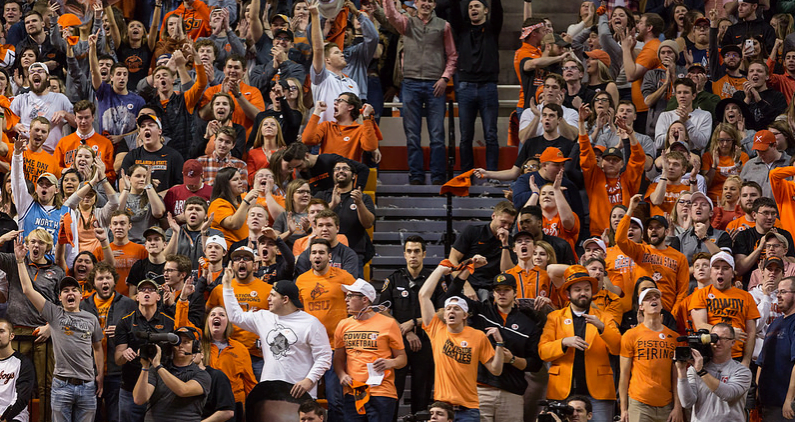 Jawun Evans and Rashard Odomes absolutely burned the house down at Gallagher-Iba Arena, but the Oklahoma State Cowboys (18-9, 7-7 in the Big 12) pulled off an incredible 14-point comeback to stun the last place Oklahoma Sooners, winning 96-92 in Stillwater Saturday night and sweeping the season series against their rivals for the first time since 2004.

Evans played like the superstar he is, scoring 27 points, dishing out 9 assists, and leading the charge down the stretch in one of the biggest games of his career. Phil Forte poured in 22 in his final Bedlam, and Jeffrey Carroll added 23 before fouling out.

In the first half, the visitors from Norman absolutely shot the lights out, hitting 7-of-12 threes and shooting 56.7 percent from the field. Five different Sooners hit 3s in the first half, who arguably played their best offensive half of the season to start Bedlam. The red hot Sooners were lead by Dante Buford, who hit all three of his 3-pointers off the bench. Oklahoma State actually shot seven more threes, but hit on just 7-of-19 (36.8 percent).

Sooner guard Rashard Odomes, averaging 9.8 points per game on the year, lead the Sooners with 13 points at the break, on 5-7 shooting, also pulling down 7 boards. He finished with 29 points — a career-high.

Oklahoma State looked rushed on the offensive end, jacking one 3-pointer after another, while failing to close out on shooters on the defensive end. Jawun Evans shot just 2-8 before the break, but it was Jeffrey Carroll (17 points) and Phil Forte (15 points) that were able to keep the Cowboys within striking range, as Oklahoma took a 53-44 to halftime.

Oklahoma State came out and cut it to a 4-point lead within the first few minutes of the second half, but OU answered every run, hitting shot after shot. Kam McGusty, Rashard Odomes, and Christian James channeled their inner Tony Crocker and took it at the Cowboys’ terrific backcourt.

Just when Oklahoma took a 13 point lead at 82-69, Jawun Evans went super human, laying the aforementioned Sooner guards in his wake of destruction. No. 1 had 22 in the second half, scoring 16 in a row at one point in the second half, securing his name in Bedlam lore forever.

Oklahoma State finally re-took the lead under two minutes to go, and lead 94-92 with 44 seconds to go. Yet again, Mitch Solomon found himself at the free throw line late, and hit a pair of huge free throws with 9.3 seconds to go to seal the 96-92 win.

The Cowboys have somehow battled back from an 0-6 start to Big 12 play to even their conference record at 7-7, now sitting in sole possession of 5th place in the Big 12. Next up is a trip to Manhattan on Wednesday night to play the Kansas State Wildcats (17-10, 6-8 in the Big 12).