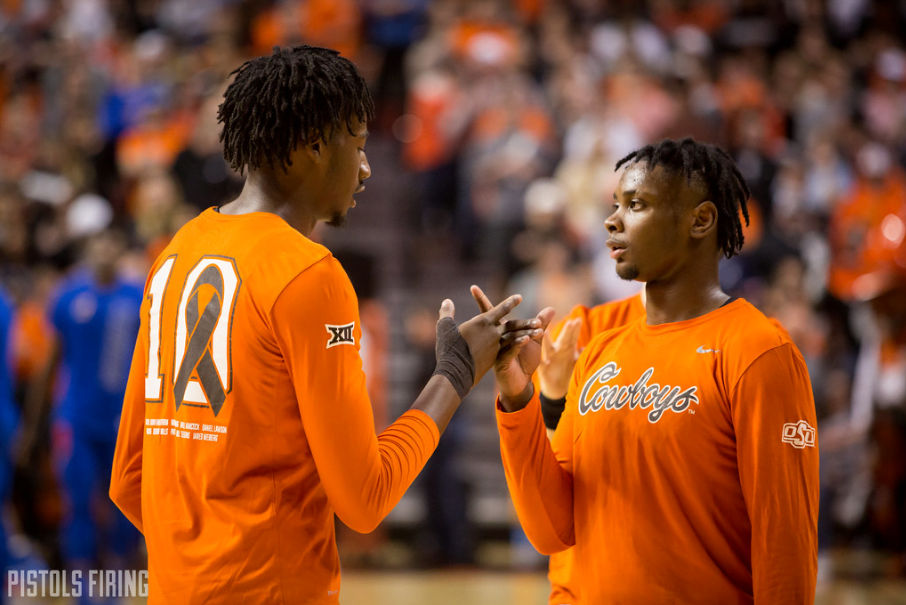 Oklahoma State got smoked in its first Bedlam basketball game of the season, 82-69 as Brady Manek went full Dirk Nowitzki and dropped 30 points on the Pokes, 22 of which came in the first half.

OSU struggled to keep up with Manek early in the game — much less OU — and trailed the decent-but-not-great Sooners 43-30 at halftime.

Things didn’t get worse for Mike Boynton’s squad in the second half, but they didn’t need to for OU to shoot 57 percent in the second frame, cruise to the win and deliver OSU its eighth consecutive Big 12 loss to open the season.

On the positive side, the Cowboys were led by Cam McGriff, who had 15 points and 8 boards and Isaac Likekele, who pitched in a 10-3-6 line. Manek didn’t need much help from his colleagues, but he got plenty of it from Austin Reaves, who had 21 points (including a couple of mystifying dunks like this one), 7 boards and 6 assists.

This game may have broken me personally. I’ve been trying to remain optimistic and hold the rest of the year in one hand and Cade Cunninghim in the other. Manek going bonkers today destroyed all of it for me. I don’t know why. Maybe it’s the filthy mustache. Maybe it’s the lack of defense from OSU. Maybe it’s some combination of those things and OSU losing every Bedlam it looks at these days, but this is the first time over the last three years that I’ve really been down and out on this program.

I don’t know when the first Big 12 win is coming. The Cowboys get TCU at home on Wednesday before traveling to No. 1 Baylor next Saturday. Things are bleak. I’d like to eat all of these words, but I doubt I’ll have to.

There have been a handful of last-ditch opportunities to save the season, but this was probably the last of them. No matter what happens from here on out, this year will end up worse than we thought it ever could. An OU team that had lost four of five in the Big 12 ran OSU out of the gym at home. They led for over 39 minutes of play.

The Pokes are uncompetitive and seemingly getting worse as the conference slate slides by. No incoming class of freshmen can erase that reality, no matter how much we wish they could.

• I have no data to back this up, but there can’t be another team in the country that gives as much room at the 3-point line as OSU. Are you worried that Brady Manek is going to take you to the rack? He’d struggle to take me to the rack. Might as well get on him!

• OSU is a great get-right team. Lost four of five in conference play? Sure, you’ll get right against the Pokes. Hate to see it.

• Everything OSU does seems difficult. Every bucket. Every broken pressure. Every defensive stop. It looks like they’re playing in mud, and everybody else is playing in water.

• Love the phrase, “Brady has crowded his cylinder there” from Fran.