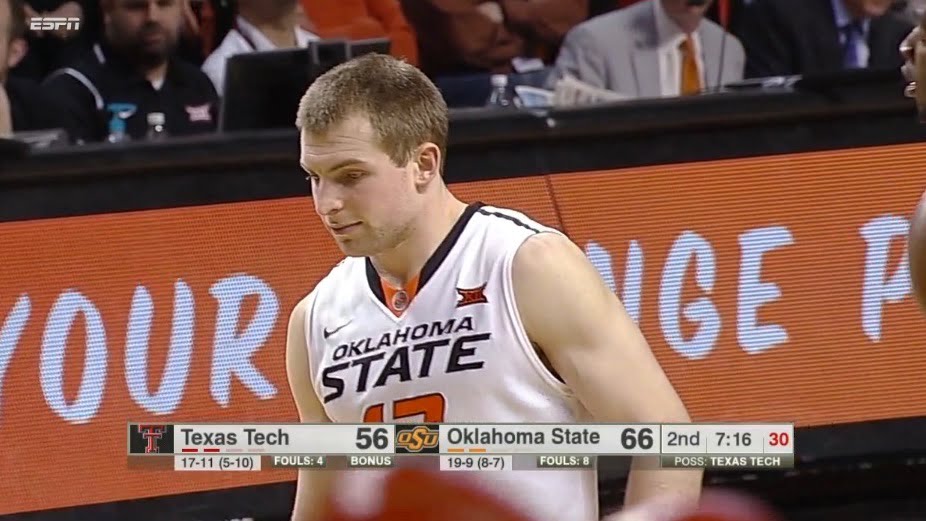 Oklahoma State moved to 20-9 on the season (9-7 in the Big 12) with its 10th victory in 11 games as it beat Texas Tech on Saturday in GIA, 80-63. The win was OSU’s second five-game winning streak since the Big 12 started with only the Baylor loss at home keeping them from having won 11 in a row.

The Pokes built a monstrous lead early, and despite a couple of bumps in the second half, closed late as Jeffrey Carroll led the way with 17 points, 6 rebounds and 2 assists. Jawun Evans and Phil Forte each scored 15 and Evans added 3 boards, 2 assists and 2 steals.

After a sluggish start by both teams teams in the first half, Oklahoma State went on a 25-7 tear to open up a double-digit lead over the Red Raiders. They were propelled by horrific passing from Texas Tech, 3-pointers from Phil Forte and Davon Dillard, and it was all punctuated by Carroll.

Jeffrey Carroll with the hammer. pic.twitter.com/yLAdpkCKau

Forte made five of the seven shots he took from deep in the first 20 minutes including this one which should have counted as four. He led the way in the first half with 15 points (all of the points he would score as it turned out) as Carroll chipped in 12. The two combined for as many as Texas Tech had as a team.

The Pokes took an 18-point lead into halftime which was astounding considering they were playing the No. 35 team in the country according to KenPom, and, you know, Jawun Evans went scoreless.

The Cowboys dared Tech to shoot from deep, and they obliged to the tune of 1-10 from 3-point range in the first 20 minutes. OSU capitalized by grabbing 19 boards (to 13 for Tech) and assisting on 11 of their 14 field goals. It was a complete and total thrashing, and this OSU team all of a sudden looks absolutely nothing like it did at the beginning of conference play.

The second half was a bit rockier, at least in the beginning. Texas Tech came out blazing, Carroll and Mitchell Solomon picked up the third fouls early and OSU struggled to score. They mustered just eight points in the first seven minutes of the second half.

An 18-point lead dipped to nine in the first five minutes and then was cut to seven with just 11 minutes left in the game. But Oklahoma State’s stars would handle it the rest of the way. Carroll and Evans combined to score 14 of the final 16 and Clip provided what was effectively a double dagger with six minutes left.

Evans scored all 15 of his points in the second half.

OSU did not play well in the second half, but the 18-point halftime deficit would prove too much for Tech to overcome. You have to have loads of firepower to come back from that many down on the road. Tech is a nice team, but they didn’t have the goods to get all that close. Plus they shot just 4-18 from 3-point range.

Evans and Co. actually shot it better in the second half (53 percent to 47 percent) but launched 11 fewer shots because they turned it over on 11 of 33 second half possessions.

Underwood won’t be pleased with the effort after halftime, but the Cowboys hit every free throw they took (22-22) and out-rebounded Tech 37-28.  The only hiccup was that they turned it over on 25 percent (!) of their possessions. Seven players had two or more turnovers.