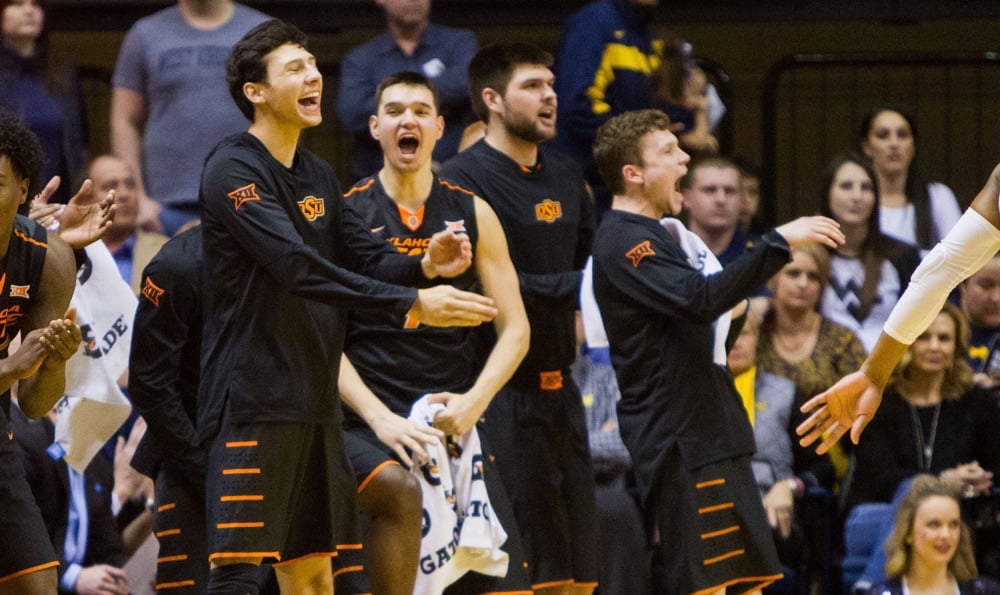 It’s happening, you guys. Oklahoma State (15-8, 4-6 in Big 12) handed No. 7 West Virginia (18-5, 6-4 in Big 12) just their fourth home loss in the last two years as Oklahoma State pulled the massive upset on Saturday afternoon. Jeffrey Carroll and Jawun Evans lead the Cowboys with a combined 38 points and the Pokes extended their winning streak to five games.

Jeffrey Carroll came out on fire to begin the game, scoring 13 points in the game’s opening five minutes to help Oklahoma State out to the early lead. He finished the half with 17 points on 6-9 shooting. Jawun Evans chipped in four points and four assists as well. However, West Virginia’s pressure forced a lot of turnovers and Lamont West scored 15 huge points off the bench in the first half, to give the Mountaineers a 44-40 lead going into the half.

The Cowboys stayed in the game thanks to shooting 6-8 from 3-point range, and a 64 percent mark from the field overall, despite turning it over 10 times. West Virginia held onto the slight edge at the half by shooting 62 percent from the field themselves, scoring 17 points off turnovers in the first half, and outscoring the Cowboys in bench points 28-14, in large part thanks to Lamont West and Tarik Phillips, who added 9 points.

In the second half, Oklahoma State and West Virginia battled back and forth, neither team able to pull away from the other. The most incredible play of the game came at the 8:45 mark, when Davon Dillard took the ball at the 3-point line and decided he wanted to dunk on and end the entire state of West Virginia.

The Cowboys played much better against “Press Virginia” and their vaunted defense offensively in the second half, limiting turnovers, moving the ball, and finding the open man. On defense, the Pokes moved to a 3-2 zone against the Mountaineer offense and were able to slow down the third-best offensive rebounding team in the country.

OSU ended the day shooting a ridiculous 63 percent from the field and limiting West Virginia to just 10 field goals on 28 attempts in the second half.

Carroll finished with 20 on 7-11 shooting from the field. Evans had his usual absurd 18-5-4-2 line and Lindy Waters hit both of the 3-pointers he took to shut it down late. Another key? Oklahoma State went 24-27 from the line to close things out.

Once on the outside looking in, the Cowboys are, as of today, firmly in the tournament field, according to Joe Lunardi. Oklahoma State (15-8, 4-6 in Big 12) will host Baylor to try to extend their winning streak to six games on Wednesday at Gallagher-Iba Arena.