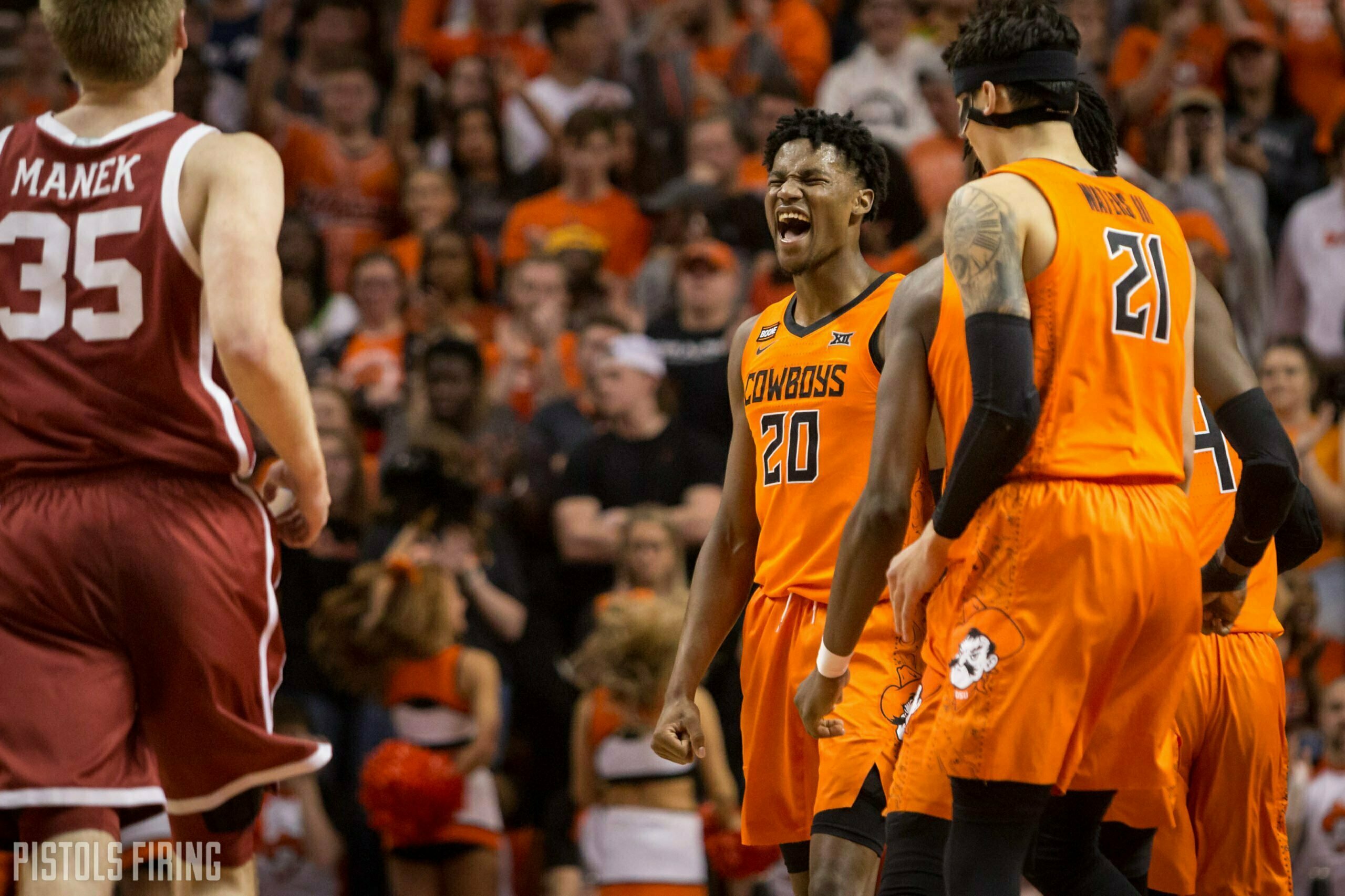 For the second straight week, Oklahoma State lit up Gallagher-Iba Arena on a Saturday afternoon against a team it lost to in its first lap around the Big 12.

A week ago, it was a win over a ranked Texas Tech team with the 1995 OSU squad in attendance to celebrate the 25th anniversary of their amazing run to Seattle. This week? How about a Bedlam blowout with one of OSU’s three seniors going for a career-high as OSU avenged an ugly loss in Norman a month ago.

Cam McGriff led the Pokes with 28 points, which ties his old career-high of 28 against LSU back in November 2018. Freshman Kalib Boone continued his string of solid games with a 14-point performance (12 in the first half) and Yor Anei added a 10-10 double-double.

McGriff and Boone won the day in the first half for the Pokes. OU went up early, but those two combined for 12 of OSU’s 15 field goals and 28 of OSU’s 42 points. The Cowboys took the lead late in the first period and never trailed in the second half.

Boone cooled off as OSU entered the second frame, but Cam held the dagger. With OSU fading a bit toward the end and its lead cut to 7 with under 10 minutes left, McGriff hit three 3-pointers in a span of five minutes, and OSU went on a 14-point run to fully put the Sooners away.

Despite the barrage late, OSU mostly kept to its newfound philosophy of feeding the ball inside and getting to the rim. They took just 18 3-pointers, made nine of them and out-shot the Sooners 45 percent to 38 percent for the game.

Brady Manek — who had 30 against OSU in Norman — scored just 2 points on Saturday. Austin Reaves scored 22 for the Sooners.

The victory is OSU’s third in four games and first over OU since the Big 12 Tournament in March 2018. It moves Mike Boynton’s squad to 14-13 on the season (4-10 in the Big 12) with Kansas, Iowa State, Kansas State and Texas on deck.

It’s probably too late for anything crazy to happen regarding the postseason, but regardless, taking Bedlam is always a delight. Even more so when one of the key cogs is a true freshman who’s going to be in Stillwater for a long, long time.

As OSU moves through the end of February and into March, it seems to have found a new identity (as an interior team?) and a little momentum. Big Monday at KU is a good way to end all that of course, but what if — you know — they don’t …