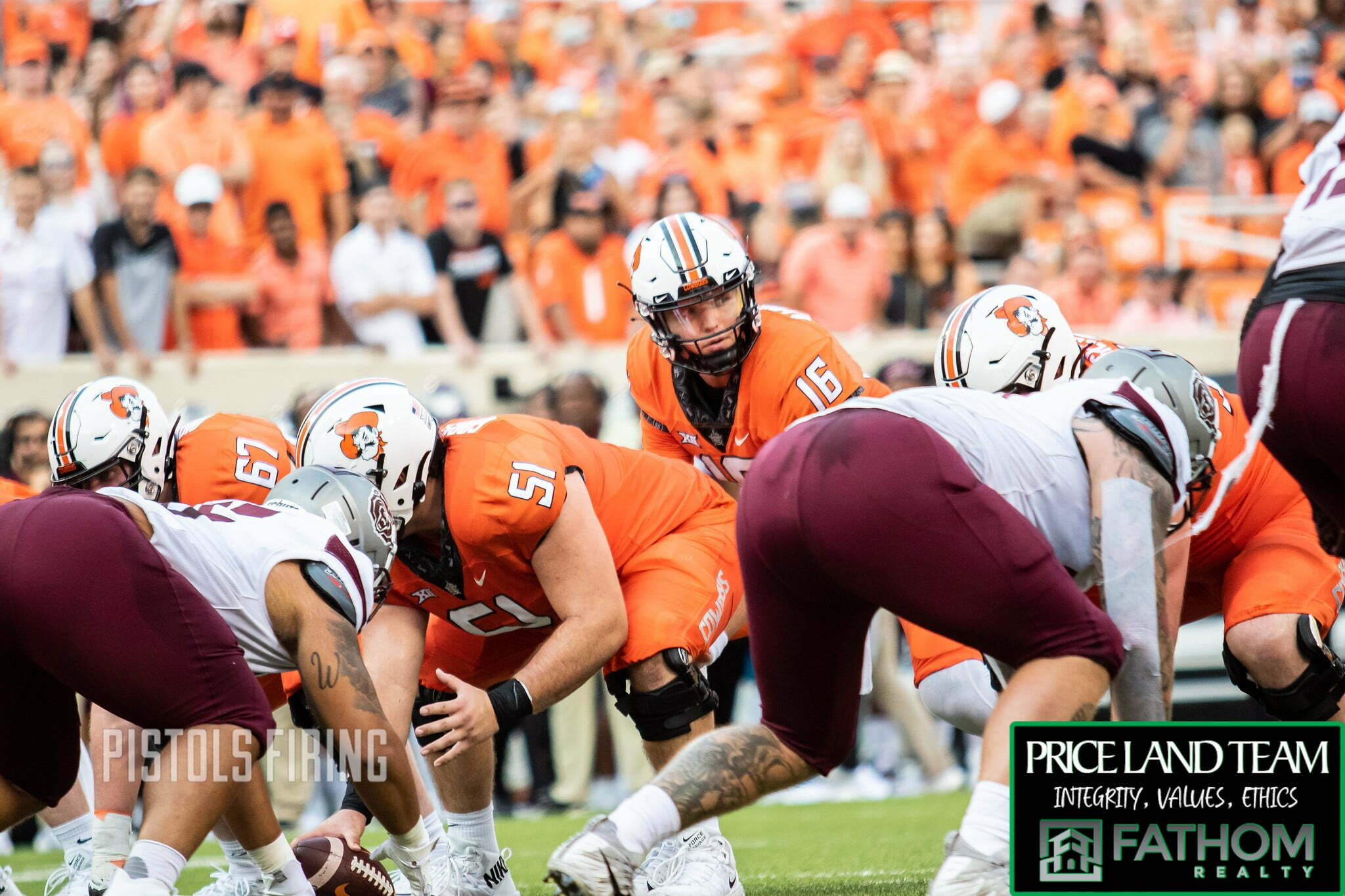 It wasn’t pretty, but a shorthanded Oklahoma State team without starting QB Spencer Sanders (among others) was able to survive four ugly quarters and move to 1-0. OSU beat Missouri State 23-16 on Saturday night but leaves Week 1 with some substantial question marks moving forward.

OSU’s offense was supposed to be able to run the ball.

According to the summer narrative, the Cowboys boasted a much-improved offensive line and a deep stable of running backs. But from start to finish in their season-opener, the Cowboys couldn’t get any push up front or consistently make plays in the backfield against an FCS team. OSU coaches didn’t even trust their run game to run out the clock with a one-touchdown lead in the waning moments of the game.

Led by Shane Illingworth, the Cowboys did start fast, finding the end zone on three of their first four drives (two of those by foot) but didn’t score another point until early in the fourth quarter and never saw pay dirt again. And that field goal came on a possession that started at the MSU 11-yard line.

The defense did its job for the most part. The Cowboys led the country in third-down defense last year and lived up to the billing on Saturday allowing just 5-for-17 on the money down. The Bears started 1-of-11 on third down.

After a fast start, Illingworth fell into the trap of trying to force the issue and didn’t get much help from his run game, an issue that Spencer Sanders’ dual-threat ability could help alleviate. The sophomore started 12-for-15 from the pocket but finished 22-for-40 for 315 yards, one touchdown and one interception.

Illingworth spread the ball around with eight different Cowboys catching a pass but WR1 was — and maybe is moving — Tay Martin. The big-bodied target hauled in six of his 10 targets (both OSU highs) for 107 yards and a score.

But as the game went on, the Cowboys offense proved to be one-dimensional and the Bears defense took advantage. OSU’s offensive line had trouble moving bodies up front and that resulted in a woeful running output. Despite a pair of red zone touchdown runs by Jaylen Warren and LD Brown, the Pokes mustered just 54 rushing yards and an abysmal 1.9 yards per carry.

That hot start gave way to a ho-hum second and third quarters by OSU, but the final period was downright ugly.

On their first snap of the fourth quarter, the Cowboys had a 22-yard pass to Jaylen Warren called back for holding. That resulted in back-to-back three-and-outs. But on the ensuing punt, Missouri State returned Wall muffed a punt to give OSU the ball 11 yards from the end zone.

On third and seven, Illingworth took consecutive delay of game penalties to put the Cowboys behind the chains only to redeem himself with a shot to Tay Martin in the end zone. But on further review, Martin bobbled the ball and the score was erased. Alex Hale’s field goal made it a 14-point game.

Malcom Rodriguez has wrestled a lot of players to the ground during his career — leading the Pokes in tackles the last two seasons — but he set a career record for takedowns on Saturday with 15. His previous high was 12.

Rookie defensive end Collin Oliver logged his first sack, with an assist from Jabbar Muhammad, on the play that might have saved the game. On third-and-10 from the OSU 26 and the Bears threatening the catastrophic upset, the two underclassmen sacked Jason Shelly for a nine-yard loss. The Cowboys sealed the win when Devin Harper sacked Shelley on fourth down.

OSU was missing some notable pieces while Missouri State benefited from an influx of talent. Starting quarterback Spencer Sanders sat out due to Covid protocols, and a smattering of OSU starters and rotation players were also out including Trace Ford, offensive lineman Hunter Woodard and starting Cowboy Back Logan Carter.

Missouri State came in more fresh than OSU, having played in the FCS playoffs this past spring and benefiting from 33 new players on the roster including 18 transfers.

The Cowboys are back in action next Saturday when they host the Tulsa Golden Hurricane for an 11 a.m. kickoff.