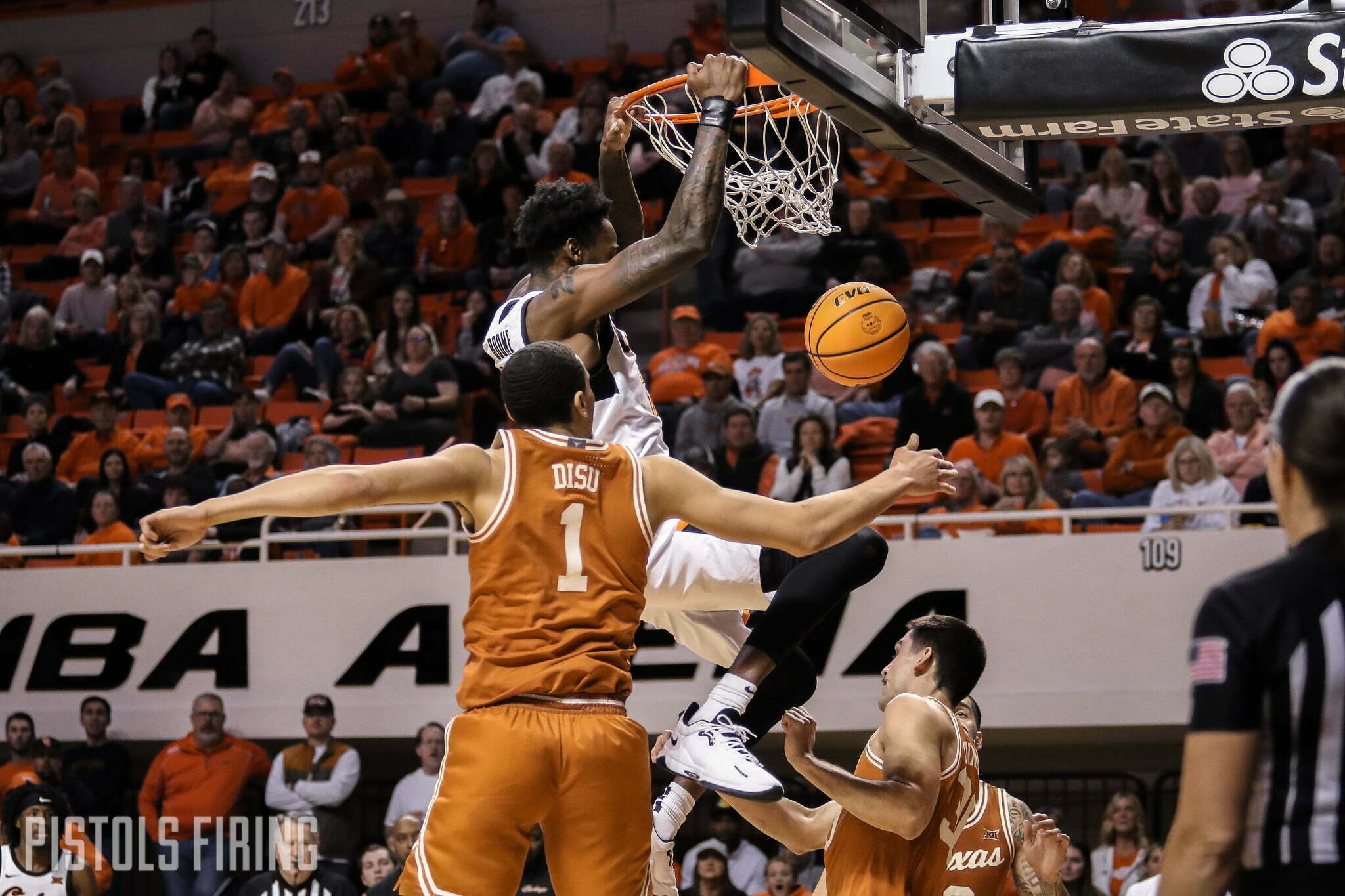 Facing the Big 12’s highest-scoring team without arguably its best defenders means you need to get some big contributions from some of their other guys, which the Cowboys did. And it was almost enough.

Oklahoma State fell to No. 6 Texas 56-46 in Stillwater on Saturday despite probably their best defensive performance of the season, but long scoring draughts and inconsistent shooting have become too common for this team. And it proved too much to overcome.

Without the league’s leading shot blocker Oklahoma State swatted a season-high 12 shots. Their previous best was nine against Prairie View. Without the reigning Co-Defensive Player of the Year, OSU held Texas to a season-low 56 points. UT came in averaging 84.1 points per game (10th nationally).

Moussa Cisse was day-to-day on Thursday, according to OSU head coach Mike Boynton, after suffering a nasty ankle turn in the Cowboys’ win over West Virginia. He was unable to play on Saturday, and the Cowboys had to depend on others’ contributions and they got some.

OSU forward Woody Newton saw the floor for 11 minutes, the most he’s played since the season opener, and did some nice things. He scored three points

Caleb Asberry hit two big 3-pointers, and Quion Williams only scored a point but played 11 tough minutes and recorded four rebounds, a block and an assist. Chris Harris made his presence known in short spurts.

Midway through the first half, Boynton went small with Boone at center and Harris was part of that lineup. Harris immediately nailed an open 3 to cut the game back to 13-10 and then went diving for a loose ball on the other side of the court. When you’re shorthanded, little chunks of momentum are crucial to fill in the gaps. Then in the second half he had a huge lob assist to Kalib Boone to bring the Cowboys within four. He finished with three points, an assist and a block.

Speaking of momentum, John-Michael Wright engineered an all-time swing when the Cowboys needed it badly in the first half. The Longhorns had built a 22-14 lead with eight minutes to go until intermission when Wright got the home crowd going with a four-point play.

Avery Anderson, Bryce Thompson, Tyreek Smith and Woody Newton each had multiple fouls in the first half. Already shorthanded in his frontcourt and in foul trouble, Boynton had to play a dangerous game of subbing guys in and out to try to keep the Cowboys within single digits of the vaunted Longhorns, and he just barely did trailing 32-24 at the break.

The shorthanded Cowboys did yeoman’s work to stay within striking distance of the Longhorns and allow for the later run. OSU didn’t score a field goal from the 7:16 mark in the first half to the 16:14 mark in the second — both of those were Wright 3-pointers — but somehow that second one cut the lead to five.

Another momentum swing occurred midway through the second by Kalib Boone. He followed up his one layup with a two-hand slam and then a huge block on the other end to send the home crowd to their feet.

Seconds later Caleb Asberry nailed the first of two 3-pointers to pull the Cowboys within 4. His second long ball gave the Cowboys their first lead since the opening minutes of the game.

A month ago, Mike Boynton commented on Boone’s lack of consistency but what a luxury he’s been this week. Without Cisse, Boone followed up a 10-point, six-rebound performance with a 16-10 double-double. He also swatted a season-high six shots.

The Longhorns went on a 6-0 run, and the Cowboys were unable to score consistently enough to stay in it. As much as the Cowboys got contributions from their peripheral players, OSU’s leading scorers, Anderson and Thompson, scored just five points each and combined to go just 3-of-14. The pair scored just three points in the second half.

The other big disparity was at the free-throw line. Both teams took 21 free shots, but the Cowboys missed nine of theirs in a game that they trailed by just four with 2:24 remaining.

The Cowboys faced the tough task of making the high-scoring Longhorns play their game, slower and uglier, and the mostly succeeded. But there are no consolation Ws in Big 12 play. The Cowboys move to 9-6 and 1-2 in the conference play.

Next up, the Cowboys head to the Little Apple. They’ll face Kansas State in Manhattan at 6 p.m. Tuesday.