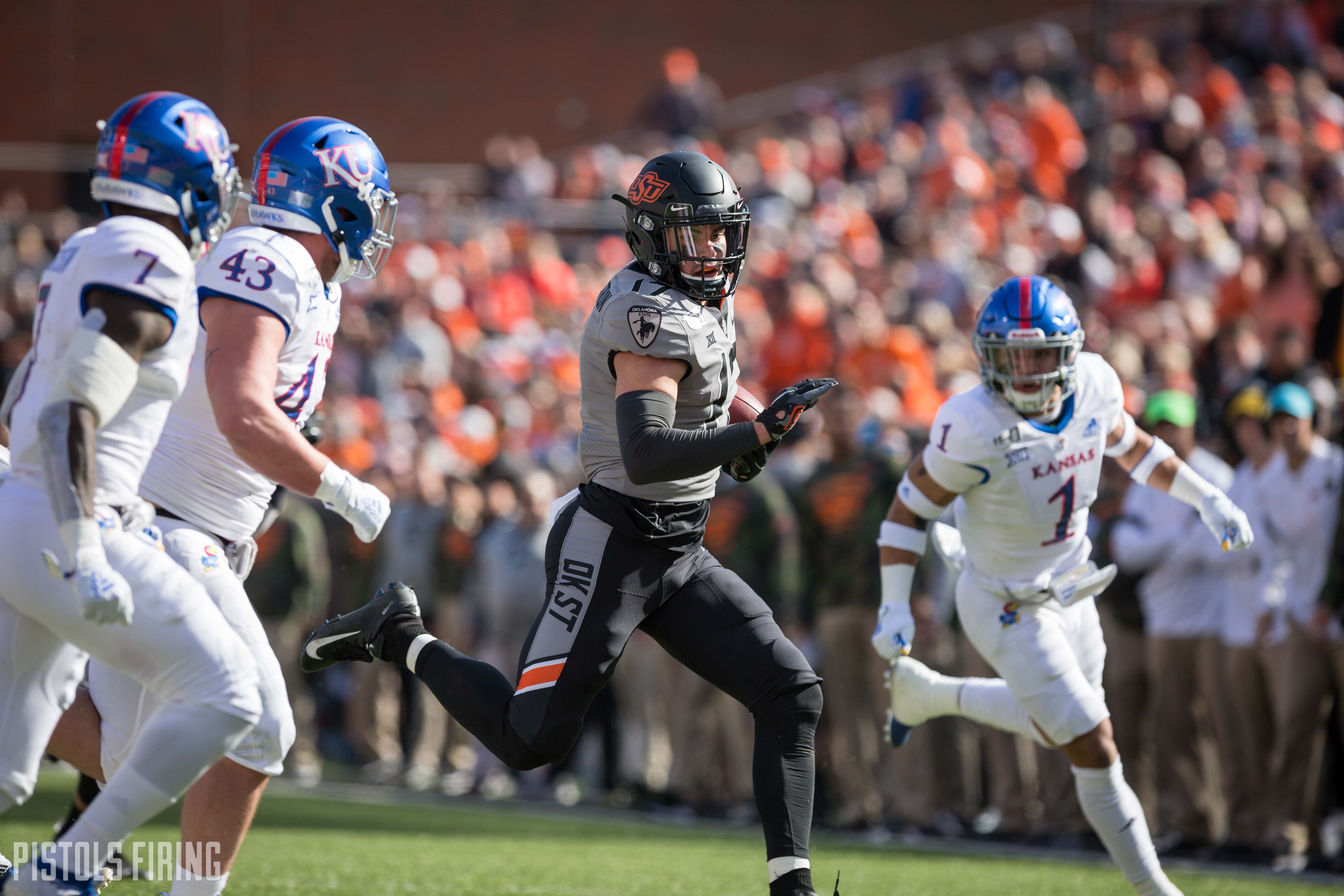 Les Miles got a warm welcome return to Boone Pickens Stadium before things got started in Stillwater, but once the Cowboys hit the field, it looked they had a vendetta against the Mad Hatter.

Despite a pair of missed field goals, the Cowboys went into halftime with a big lead behind 100 yards and two TDs from Hubbard, 107 receiving yards and a score from Dillon Stoner and 154 and one passing TD from Spencer Sanders.

Not to be outdone, OSU’s defense held KU to 96 total yards in the first half and just five first downs while turning over the Jayhawks twice. That all added up to a 24-0 lead when the Cowboys got the ball back with 24 ticks left in the second quarter.

But Chuba would have none of that.

That play and a quick shot to Dillon Stoner allowed for the field goal attempt that looked good but, apparently, wasn’t. It was probably the same result Gundy was hoping for three plays earlier, just more highlight reel fodder.

The second half brought more of the same. The Jayhawks would be held scoreless until midway through the fourth quarter and the Cowboys would cruise to an easy 31-13 victory with the majority of its starters on the bench.

It ended ugly, and not just because Matt Ammendola missed this third field goal of the day (but just his fourth of the season).

Instead of the Cowboys running the clock out, the game got messy with penalty after penalty and several chippy displays between OSU’s offense and a frustrated KU defense. Again, same result, just more stoppages and flags.

Ultimately, the Cowboys get the big victory, their third straight, and continued their streak of winning the turnover margin by a significant margin.

• Dillon Stoner continues to fill in for Tylan Wallace nicely. He turned in career game with 150 yards and two TDs on five catches.

• Chuba Hubbard continued his streak of 100-plus yard games totalling 122 and two scores on 23 carries. He also caught two passes for 42 yards.

• Kolby Harvell-Peel continued his hot streak, nabbing two interceptions for the second-straight week and leads the Cowboys with five on the season. He also recorded three tackles and a QB hurry.

• Jarrick Bernard led the Pokes with seven total tackles (five solo), 1.5 tackles for loss and his first sack of the season. Amen Ogbongbemiga pitched in six solo tackles, and a tackle for loss.

The Cowboys move to 7-3 (4-3 in conference) and head to Morgantown next Saturday to take on West Virginia before a Senior Night Bedlam finale on Thanksgiving Day weekend.