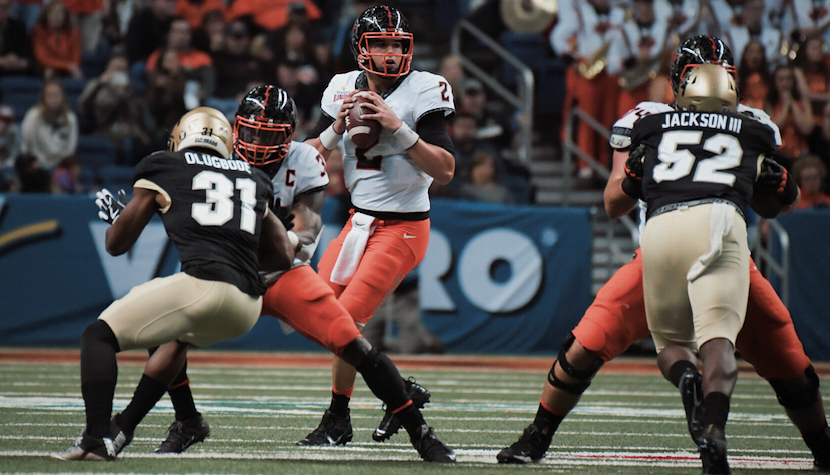 Oklahoma State came out with a little extra fire under it’s bellies against Colorado, and it helped fuel them to one of the most lopsided bowl wins in the Mike Gundy era.

The Cowboys scored first. Then second. Then third …. and kept scoring until it was up 31-0 with just under 6 minutes left in the game. By that point, Oklahoma State was trotting out fresh bodies at every position in garbage time. It was out of hand before the Buffs finally got on board, adding a 2-point conversion on top of their lone touchdown to cut it to 31-8.

They did it behind the hands of their two stars: Mason Rudolph and James Washington.

Good thing they are coming back for their senior year. Because they were incredible.

James Washington found himself open on nearly every pass play. And that’s no exaggeration, either. He hauled in a ridiculous 9 receptions for 171 yards. And that was basically his stats through 2.5 quarters, as he exited early with an injury.

It was this, just on loop for the entirety of his MVP caliber game:

Washington won Alamo Bowl MVP honors, but it goes without saying that Rudolph was the leader of the band. He put together one of the most impressive games of the season going 22-of-34, adding 314 yards through the air and 3 touchdowns. All of that while distributing it to six different receivers.

It put a bow on a very successful season for Oklahoma State, notching Mike Gundy his 5th 10-win season as head coach, and just OSU’s eighth 10-win season ever on the whole.

With Mason Rudolph and James Washington on board, Oklahoma State has a momentum buillding win to carry into the offseason that could fuel a team who could once again find themselves playing for the Big 12 title in the final regular season game in 2017.