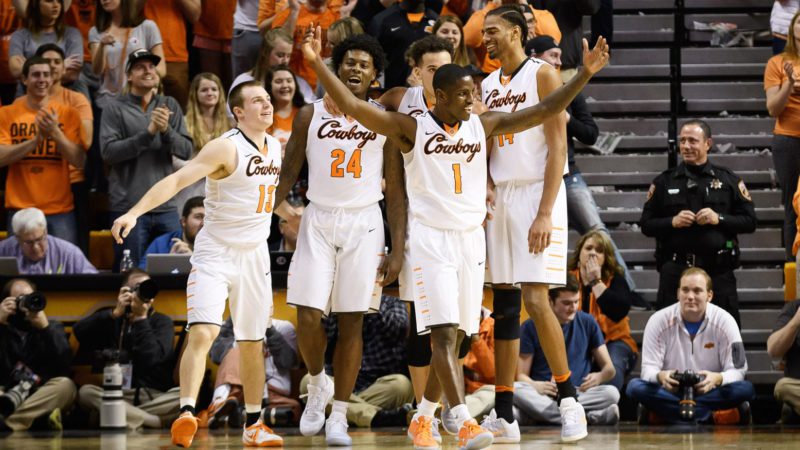 The Oklahoma State Cowboys (12-8, 2-6) welcomed the Arkansas Razorbacks (16-4, 5-3) to a sold-out and truly rowdy Gallagher-Iba Arena. Both teams came in on winning streaks, OSU having won two straight and Arkansas trying to make it five in a row. The Cowboys would not oblige.

The Cowboys got out to another fast start making their first three shots and going up 7-0 on the Hogs. With just over four minutes gone in the first half the Cowboys held a 12-2 lead after Phil Forte hit his second corner 3-pointer, pulling him within one of Keiton Page’s OSU career record. The quick left spin and swish necessitated a timeout by Arkansas head coach Mike Anderson.

Out of the timeout Arkansas ramped up their press defense and made an effort to trap the ball-handler which worked a couple of times including a turnover off by Brandon Averette on an inbounds play. The Razorback defense kept it close for a short time but the game quickly got out of hand with some hot first-half shooting from OSU.

Davon Dillard continued his impressive play as of late, matching his career high of 10 points in this first nine minutes. He ended the day with 10 (4-7, 1-1 from) three rebounds and an assist. This seems to be more than just a fad. Dillard has accepted his role and flourished, providing Underwood with a huge spark off the bench.

The Cowboys went to the break up 59-33, with four double-digit scorers and shooting 54 percent from the field as well as 50 percent from beyond the arc. They held Arkansas to 40 percent shooting (30 percent from 3) in the first half. Their leading scorer had seven points.

The Razorbacks got it as close as 21 with a 9-0 run early in the second half but the Cowboys dry streak didn’t last long. They began to pour it on again with 20 from Jeffrey Carroll, 16 from Jawun Evans and 18 points from Phil Forte — including his record-breaking 300th made 3-pointer.

The Cowboys’s offense was a thing of beauty. The ball moved with purpose and players were cutting and active. The Cowboys recorded 24 assists on 33 made field goals and only turned the ball over seven times.

But the Cowboy defense was the most impressive part. The Razorbacks came in averaging 81.5 points per game — good for second in the SEC. Oklahoma State held Arkansas to just 71. This three-game winning streak coincides with Brad Underwood’s re-work of the Cowboys’ defensive philosophy after the 96-88 loss to his alma mater, Kansas State.

The Cowboys finished strong holding off a couple second-half runs and handing the Razorbacks a 99-71 loss. Arkansas never led in a game that almost seemed over at halftime. OSU hasn’t trailed for three straight games. But the Cowboys won’t have long to enjoy this win as they head to Norman in two days for an ESPN Big Monday matchup and Round 1 of Bedlam.