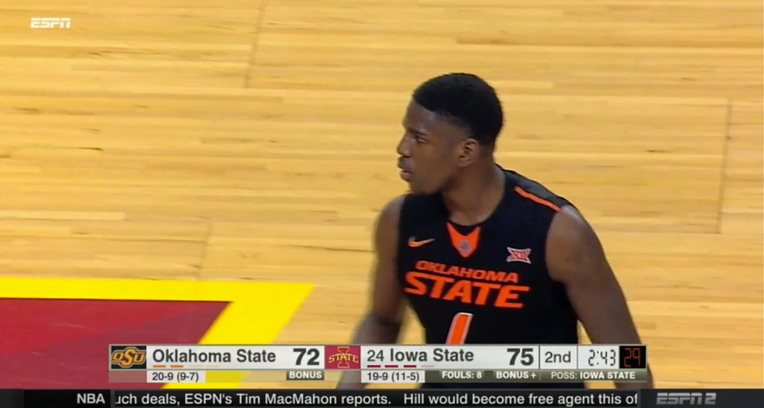 Oklahoma State was led by Jawun Evans, who was absolutely special yet again down the stretch and finished with 29 points, 6 assists, and 4 boards. Leyton Hammonds (19 points), Phil Forte (12 points on 4-8 shooting) and Jeffrey Carroll (7 points, 10 boards) also put in work for the Pokes. The teams shot remarkably similar: Oklahoma finished 29-of-59 from the field, and Iowa State finished 28-of-59 from the field.

The first half featured blistering shooting from both the Cyclones and the Pokes, especially from the 3. Iowa State made 10-of-19 (52.6%) and the Cowboys made 6-10 (60%) from downtown. The Cowboys were able to weather the Cyclones’ torrid offense by out-rebounding the Cyclones 21-10 on the boards, going into the break trailing just 40-39. The Cowboys also hit 5-6 from the charity stripe in the first half.

Leyton Hammonds continued his impressive stretch with 11 points before the break (3-3 from 3). Seriously, take a look at the wreckage the senior forward laid in his wake in his last five halves on the road-

Jawun Evans had 7, and Carroll provided 4 points and 5 boards in the first half. Iowa State was led offensively by their trio of senior guards playing their final game at Hilton Coliseum, Matt Thomas (11 points, 4-of-6 from 3), Monte Morris (8 points) and Naz Mitrou-Long (12 points).

The Cowboys hung close with the ‘Clones to start the second half until the 13 minute mark, when Brad Underwood picked up his first technical as Oklahoma State’s head coach. Undie lost it after Davon Dillard got called for a questionable over the back foul off a missed three. The Cyclones, spurred by senior Matt Thomas’ hot shooting, ripped off a run to push the lead to 61-51 in the crucial stretch.

The Cowboys, who saw their five game winning streak snapped, wrap up the regular season with a date with the number one-ranked Kansas Jayhawks (27-3, 15-2 in the Big 12) on Saturday at Gallagher-Iba, in a game that’s been sold out for about a week now. The Cowboys have won their last three against Kansas at GIA- get ready to get rowdy.