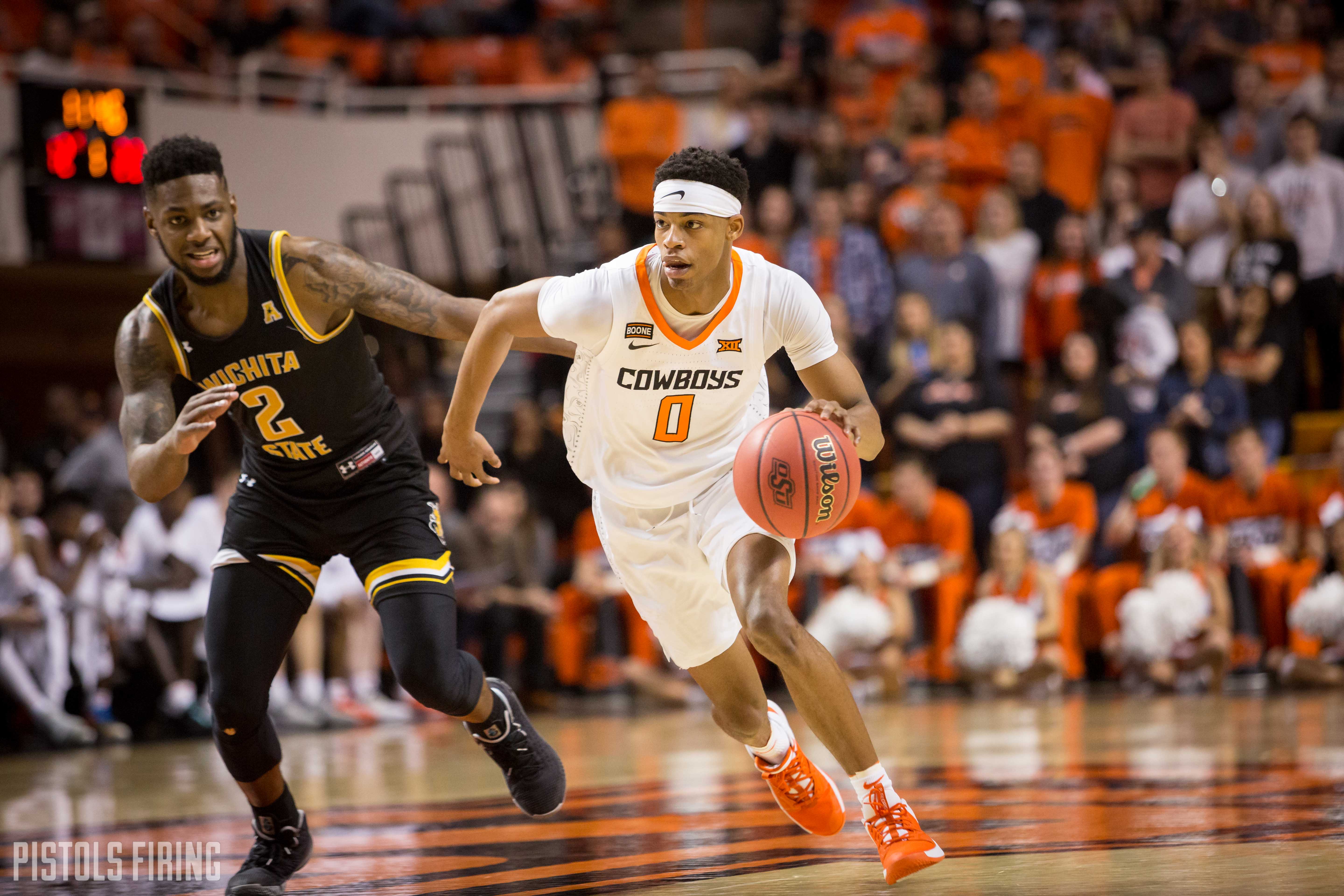 Midway through the second half, with OSU down 22 to the visitors, freshman guard Chris Harris Jr. stole an in-bounds pass darted toward the paint and made an acrobatic play at the rim only to see the ball bounce around and out of the cylinder. That was a microcosm for the Cowboys’ offensive woes on Sunday.

For the second game in a row, the Cowboys were without their floor general due to illness. In the absence of Isaac Likekele, Chris Harris Jr. again started, but it was Lindy Waters who shouldered much of the responsibility of running the offense.

The Cowboys missed Likekele on both ends of the floor. The offense was stagnant for much of the game and they could have definitely used his length and athleticism on the defensive end.

Freshman guard Tyson Etienne was the hot hand for the Shockers and Gregg Marshall rode him to a game-high 19 points on 7-of-14 shooting including 5-of-8 from 3. Jaime Echenique and Erik Stevenson added 13 points each as the Wichita State backcourt had its way with the Cowboys.

When the bad 3s are falling for a not so great 3-point shooting team, you know you’re in trouble. And that’s exactly where it OSU was headed early with the Shockers starting 4-of-6 from deep. Both teams would cool down on offense down the stretch but the Shockers started landing haymakers from deep in the second half that the Cowboys couldn’t match.

A first half that started with plenty of action grinded to a halt with both teams combining for just six points over the last five-plus minutes before intermission.

OSU ended the half 1-for-7 from the field.
Wichita State finished 1-for-11.

The Cowboys came out of the locker room still in a lull. OSU struggled to a 1-of-9 start from the field in the second half while the Shockers began to heat up from deep again. A 22-7 run by the visitors saw OSU fall behind as much as 22 early in the second.

It was mostly over from there. Mike Boynton went with an all-newcomer lineup for much of the final 10 minutes with the game all but out of reach.

Lindy Waters led all Cowboys with 11 points on 4-of-11 shooting (1-of-3 from 3) and Cam McGriff added 10 points and a team-high seven rebounds.

Avery Anderson added an instant spark off the bench pushing the ball and the Pokes to a 6-0 run. He was a +5 in the box score. He and Keylan Boone (+9) were the only Cowboys in the positive on plus-minus on the game. Keylan was getting no love from the rim on Sunday, going 2-of-6 from the field, but he didn’t let that affect his effort. Boone gobbled up three rebounds in his first three minutes on the floor and finished with five in 20 minutes.

The Cowboys will get a week off for finals before heading to Houston to face off against Kelvin Sampson and his 5-2 Cougars next Sunday at 2 p.m.