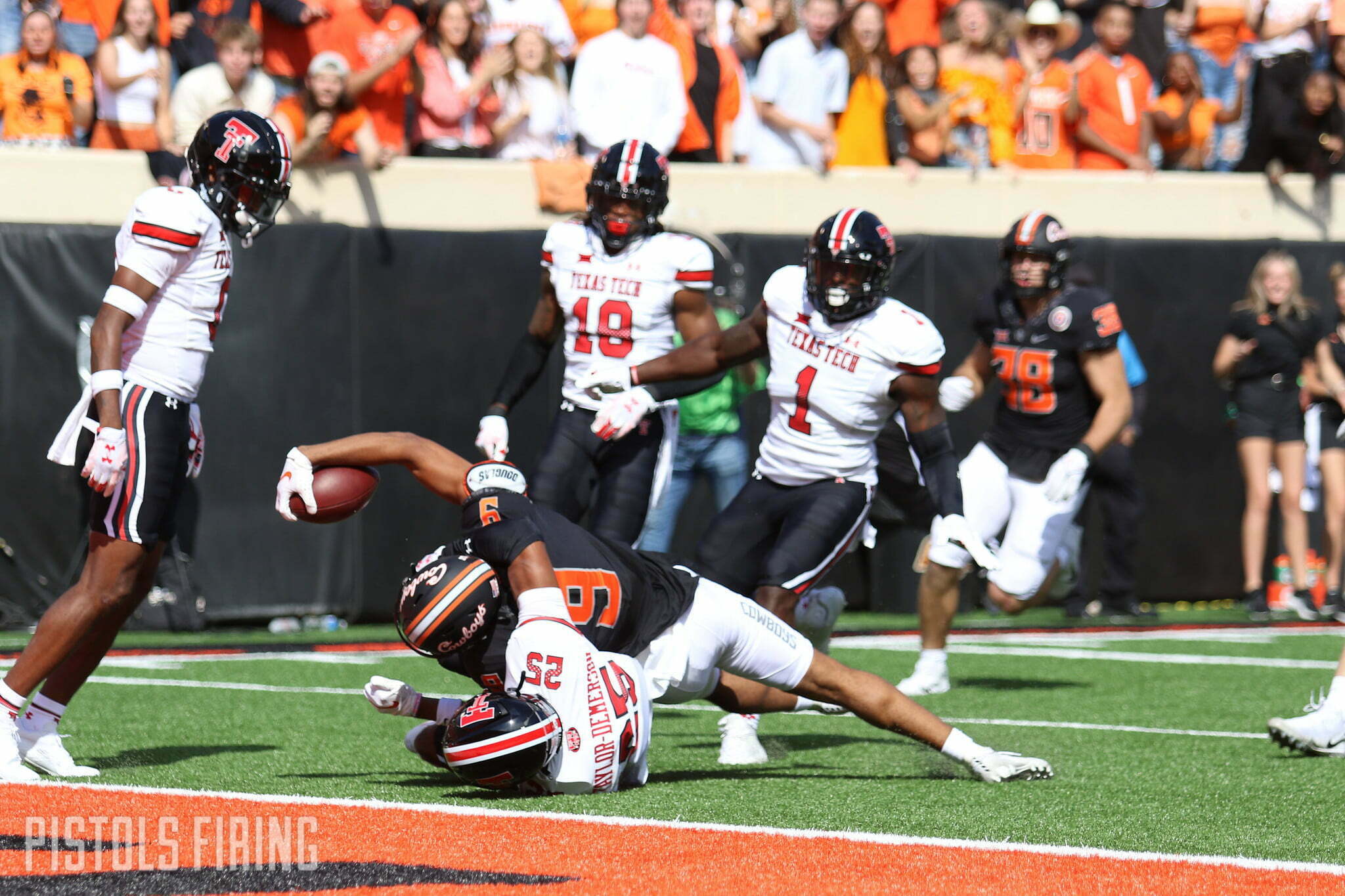 Oklahoma State’s school-record 11-game home win streak began against Texas Tech two seasons ago. The Cowboys were able to push that streak to 12 on Saturday, though the Red Raiders gave them their biggest challenge so far this season.

No. 7 Oklahoma State defeated Texas Tech 41-31 after trailing for most of the second and third quarters, and the Cowboys did so thanks to some tough running by their quarterback and some key stops by their defense.

It wasn’t his cleanest game, but Spencer Sanders was under as much duress as ever this season. And when he was allowed time to complete a pass, Tech’s cover men were there to blow up the lion’s share of them.

In the first four games, OSU had only allowed three sacks, but the Red Raiders got to Sanders three times. On several other plays, he just barely escaped capture.

Sanders finished 22-of-45 through the air for 297 yards and a touchdown. But he kept the Cowboys on the field time and time again making timely plays through the air and on the ground. He rushed it 17 times for 56 yards and two more scores. Through five games, Sander has already matched his career high of six rushing touchdowns for a season. Dominic Richardson picked up 67 tough yards and the back-breaking score on 19 attempts.

The Cowboys have had several different wide receivers show out this season. This week it was the Bryson Green Show. Green led the Cowboys with a career-high 115 yards and a touchdown including plays of 32, 32, 28 and 17 yards. Brennan Presley added six catches for 62 yards.

In his first game this season and showing some obvious rust, Jaden Bray caught two passes for 24 yards on 10 targets. He did, however, take a reverse on to convert a two-point conversion that completed the Cowboys’ second-half comeback.

In four previous first halves this season, the Cowboys outscored the opposition by 98 total points and never trailed at intermission. But Tech came out swinging from the coin toss. The Red Raiders won it and decided they wanted the ball to start the game and get some momentum, and it worked.

In the first possession of his first career start, Texas Tech redshirt freshman Behren Morton drew one too many Patrick Mahomes comparisons for the home crowd’s comfort.

He sliced up the Cowboys’ vaunted defense on his first drive going 7-of-10 — even converting a fourth down at Tech’s 34 on his second pass attempt — and paid it off with a touchdown to go up 7-nothing. To add to the brash behavior, the Red Raiders attempted, and almost retained, an onside kick on their first kickoff.

Fortunately for the Cowboys, Demarco Jones had the presence of mind to signal a fair catch that saved the possession.

The Red Raiders were able to take control thanks to a nice debut from Morton and their defense’s ability to make the Cowboys settle for field goals. Tanner Brown went 4-for-4 on 3-pointers after OSU had not attempted more than two in a game all year.

It wasn’t all good on special teams for OSU. On Tech’s first possession of the second half, the Red Raiders benefited from a kickoff out of bounds. Morton and Co. paid it off with a touchdown drive to extend their lead to 31-23.

But Morton was dinged up and gimpy after a hit in the second quarter, and the Cowboys’ defense dug its heels in and facilitated the comeback. After scoring a touchdown on its first drive of the second half, Tech didn’t score again.

Tech head coach Joey McGuire approached this game like he had nothing to lose and it worked for a good chunk of it. The Red Raiders went for it on fourth down seven times. They converted the first four of those but not the last three.

OSU’s offense tied it up at 31-all late in the third thanks to the short field its defense gave it. Brennan Presley burned the Raiders on a double-move to pick up 23 yards, which led to Sanders’ second rushing TD and a Jaden Bray successful two-point attempt.

On the next series, Mason Cobb picked off Morton, setting the Cowboys up to take their first second-half lead with a field goal in the waning moments of the third.

Dominic Richard drove toward the goal line and looked to be ready to come up short. But his legs kept churning and he got some extra push from his linemen and the play resulted in the Cowboys’ third rushing touchdown of the game as well as the Red Raiders’ coffin nail.

Next up, the Cowboys head to Fort Worth to face TCU in a battle of the last two undefeated Big 12 teams.