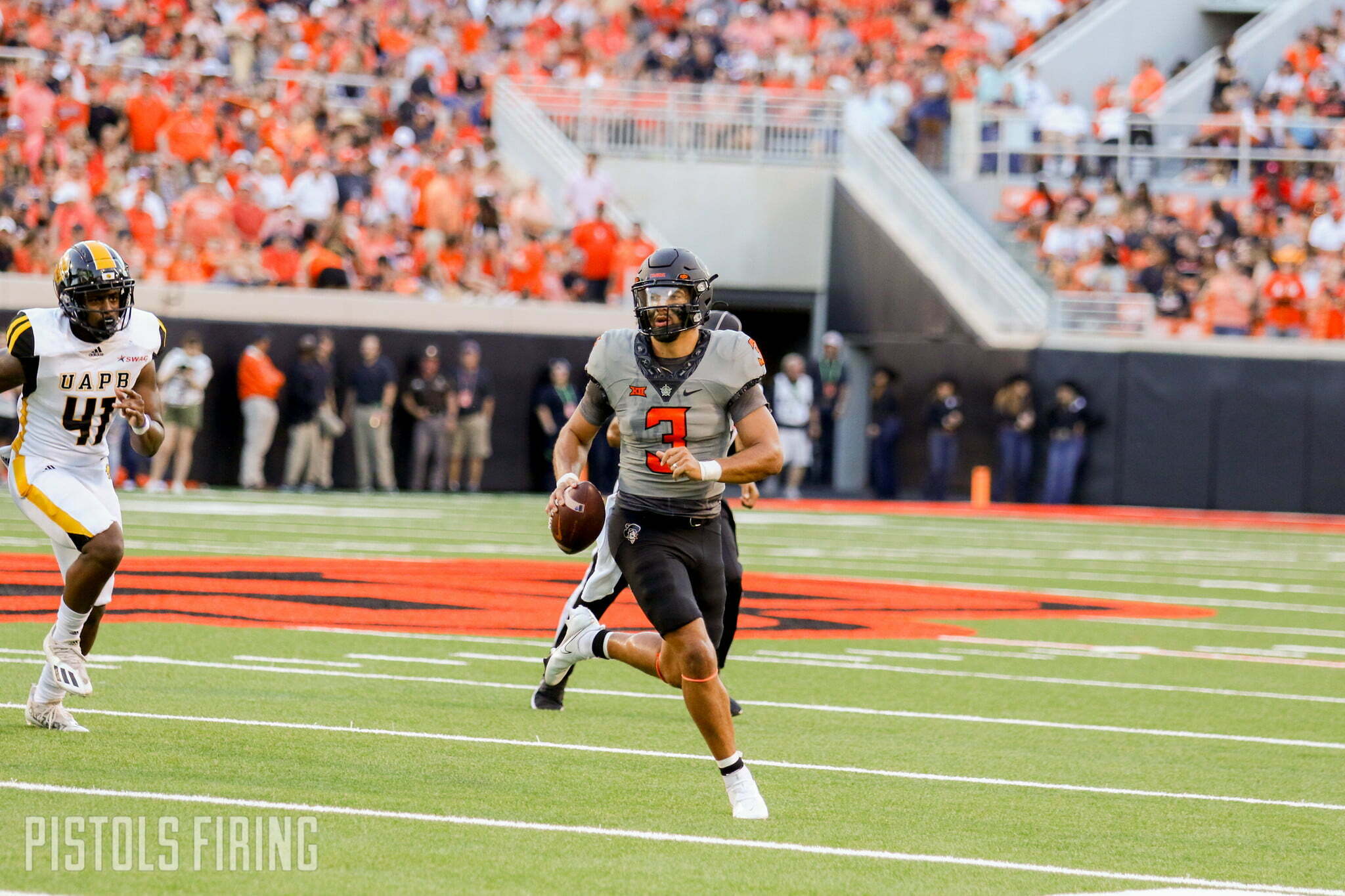 This game had it all. Trick plays, special teams scores and lots and lots of Cowboy touchdowns.

No.8 Oklahoma State took care of business, dispatching FCS opponent Arkansas-Pine Bluff, 63-7 to put a bow on its nonconference slate and head to the bye week undefeated. The win marks a school record 11-straight home victories for the Cowboys.

The Cowboys (3-0) hit the ground running, scoring a touchdown on the game’s opening drive. A pass interference call was followed up by two completions to get the Cowboys on the board. It took the Pokes just 38 seconds to get into the end zone for the first time, but it wouldn’t be the last.

The Cowboys defense forced a punt on Pine Bluff’s first possession, and then Trace Ford blocked the punt, chased it down and scooped it for the first to two special teams scores for OSU. The Cowboys were up 14-0 just three and half minutes into the first quarter. Things continued in that manner for the next 56 minutes.

OSU scored touchdowns on four of its first five drives and returned two blocked kicks for touchdowns in the first half. The Cowboys took a 49-7 lead into halftime and then built it to 63-7 early in the fourth quarter.

Spencer Sanders filled it up in a short amount of time. No. 3 came into this game tied for first in the FBS averaging 27 points responsible for in the first two games. He added to that average tying a career-high with four passing touchdowns against UAPB, in basically one quarter. Sanders completed a tight 13 of his 16 pass attempts for 242 yards and those four scores and he was done less than a minute into the second quarter.

In his stead, Gunnar Gundy enjoyed some career firsts including his first completed pass, his first interception and his first career touchdown. Gundy finished 12 for 20 for 128 yards, two touchdowns and one interception. Those two TD connections were also the first career TDs for Talyn Shettron and Cale Cabiness.

The Cowboys’ run game was mostly nonexistent until Ollie Gordon broke loose for a 53-yard touchdown early in the fourth quarter. Gordon led the Cowboys with 65 on just three attempts. Gundy also showed off his jukes and jets, picking up 42 yards on six rushes, including several designed runs. He was the Cowboys’ leading rusher until Gordon took that one to the house.

The Cowboys came into this game needing to play clean and stay healthy and they mostly accomplished both. Dominic Richardson put the ball on the turf for the second straight game, but this one was recovered by the defense. OSU lost the turnover battle 2-0 thanks to that drop and Gundy’s pick. Each gave UAPB the ball at the 22- and 23-yard lines of OSU, respectively. The Cowboys gave up their one score on one of those possessions. On the other, Kody Walterscheid blocked a UAPB field goal which Korie Black collected and returned 39 yards to paydirt. With Ford’s blocked punt score, this was the first time in OSU history that the Cowboys scored on two blocked kicks in the same game.

The Cowboys’ defense did a good job of limiting the big-play potential that UAPB boasted over its first two games. The Golden Lions hung 76 points on North American University last week. This week their only score came when Raequan Prince made a crazy catch against his helmet after UAPB started at the Cowboys’ 23-yard-line.

UAPB looked to have its second touchdown in the fourth quarter when backup quarterback Jalen Macon found wide receiver Kenji Lewis for a 38-yard catch-and-run to the end zone, but the play was called back when a review revealed that Lewis had stepped out at the 15. The Golden Lions had seven tries to score but turned it over on downs after Macon’s fourth-straight incompletion at the OSU 3-yard line.

The Cowboys’ touted front-line first-teamers didn’t record a sack, but Ben Kopenski picked up two in three plays in the third quarter. OSU help UAPB to 5-of-18 on third downs and held them to 230 total yards. Lamont Bishop led the Cowboys with five tackles. Mason Cobb added four, 2.5 tackles for loss and a sack. Kopenski had those two sacks and Nathan Latu had another.

Next up, the Cowboys head into a bye week before making the trip to Waco, Texas where they’ll face Baylor in a Big 12 Championship rematch for their conference opener.