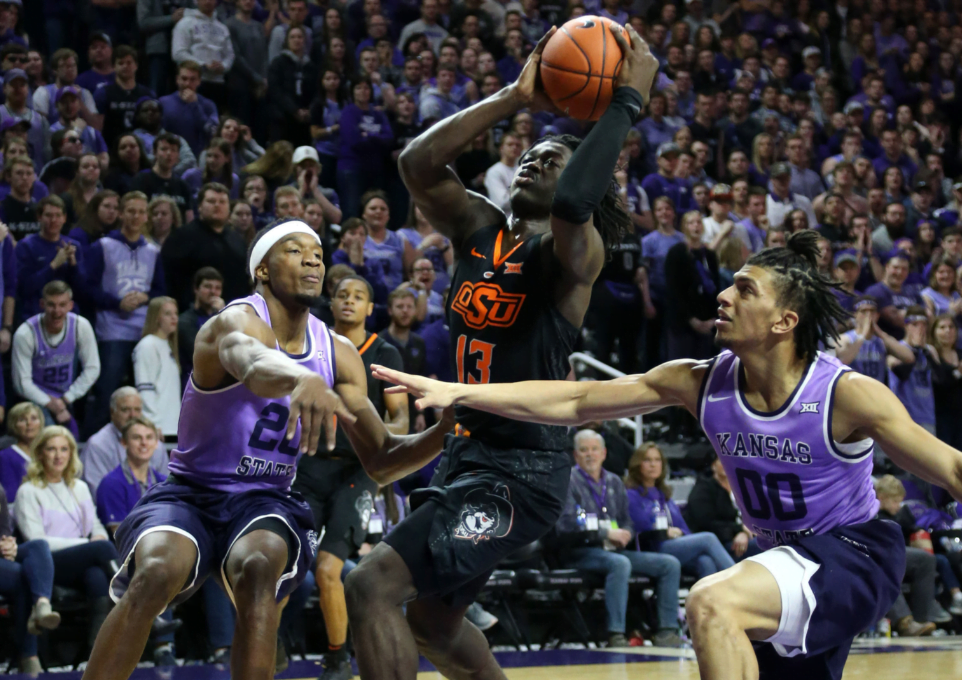 It was not the start you want when you’re on the road in a hostile environment against the league’s best team, and the Cowboys never recovered.

An electrical crowd inside Bramlage Coliseum got an early jolt on Oklahoma State’s first possession. A lazy pass by Lindy Waters was picked off by Barry Brown who paid it off with a fastbreak dunk. It was mostly downhill from there.

The No. 23 Wildcats started 7-of-8 from the field to open up an early 15-0 lead. In the meantime, OSU shot 0-for-6 from the field and did not get on the scoreboard until Isaac Likekele made a free throw at the 14:18 mark of the first half.

Halfway through the opening period, OSU had 8 points to K-State’s 25. That’s on pace for a 32-point night. Things didn’t improve much for the Cowboys who fell back as much as 24 in the first. Finding themselves in that early, deep hole, the Pokes resorted to chucking up 3s, but that was to no avail. The Pokes went 0-for-9 from deep in the first and failed to score 20 points in the first 20 minutes, taking a 42-18 deficit into the break. They never got any closer than 22 the rest of the way.

The Cowboys ended the game with five walk-ons on the court — their jerseys didn’t even include their names — and recently added J.K. Hadlock’s late bucket kept the Cowboys from tying a school record 41-point loss.

It was over… Way too early

The Cowboys weren’t able to get out of that deep hole and actually fell deeper. The Wildcats pushed their lead to 30 midway through the final period and continued to pour it on from there. This game was never in doubt in the second half.

The freshman center led the Cowboys with 12 points on 5-of-7 shooting and added three rebounds and two blocks.

The Cowboys were short a couple of assistant coaches in David Kontaxis and Scott Sutton whose flight was rerouted from Manhattan because of weather. They might need to check that flight for a few of their starters.

OSU’s three leading scorers were non-factors on Saturday. Cam McGriff, Thomas Dziagwa and Lindy Waters combined to shoot 3-of-19 from the field and 2-for-13 from 3, for at total of 12 points.

Stat You Should Know (But Might Not Want To)

Next up: Things won’t get much easier for the Pokes, who head to Lubbock to face the No. 14 Red Raiders at 6 p.m. Wednesday.