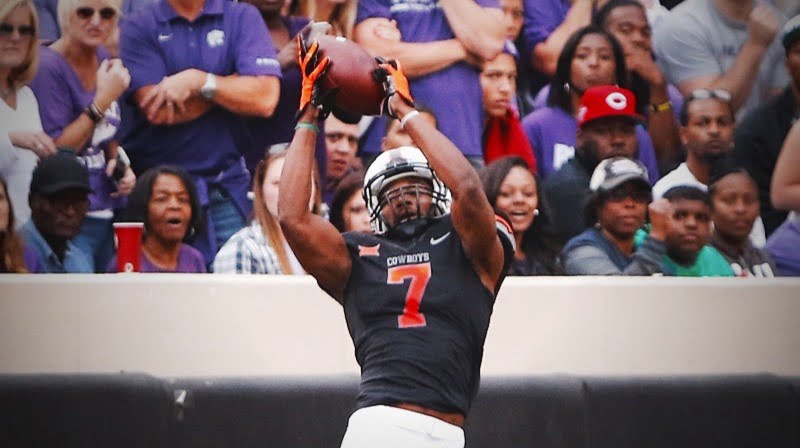 For the second time in 2015 (and just the eighth time in the Mike Yurcich era), Oklahoma State threw it more than it ran in a single game. By a lot, actually. OSU threw it 55 times and ran just 27 for a differential of 28 against Kansas State.

The previous largest margin was 15 (against Kansas State in 2013).

And it worked. Barely .. but it still worked. So … is this going to be the new plan? Let your phenomenal QB1 do his thing?

Don’t bank on it.

“I don’t think you look into a crystal ball and say this is what we have to do X amount of times,” said Yurcich after the game. “You see how the game is going, and we knew their strength was their front. We knew they were very stout, and we feel our strength is our receiving core.”

Wait …did you catch that?

Yurcich does realize that OSU’s receivers are the deepest and most impressive part of his offense. I’m not sure if this makes it more or less infuriating when OSU runs it 40 times a game for 2.1 yards.

“And our offensive line did a heck of a job protecting today, I mean a heck of a job, and they deserve a lot of credit. They don’t get enough credit. Especially after today’s performance. It was great to see those guys compete and do a great job so I’m extremely happy for those guys and you just have to go with the flow from a run-pass standpoint, and the pass was working so we stayed with it.”

It seems like the combination of both RBs being out and Kansas State having a great run defense led to all those throws, not some change in philosophy. In fact, Gundy noted that after the game.

“One, we were playing with a true freshman at running back,” said Gundy. “Two, we were playing arguably the best run defense in this league, maybe even top 10 in the country. We just didn’t feel like we could beat our heads against the wall, and we knew we had to throw it.”

I actually do want Oklahoma State to run it. Or I want them to be good enough to run it. They have a better record in the Gundy era in games when they run it more than they pass it. It’s only slight, but it matters. Their plan, and it’s a good one because they have a great defense, is to run it.

What I don’t want them to do is to be so adamant about whatever the game plan was for that week or that season that they’re unwilling to toss the thing off the top of the stadium and freelance a win like Todd Monken did in 2011 at Texas A&M. “Beating your heads against the wall,” as Gundy said. Yurcich seems like he’s open to at least entertaining the idea that freelancing can get Ws.

What Saturday proved is that OSU can win a conference game when they have to throw it 60 times in a game. Contending at the top of the league will absolutely come down to a two-month race against time to make the run game woes at least average, but at the very least, you know you have a really good backup plan if things go awry.

The other thing it might have proven to the rest of the league is that you can’t just load up against the run and let Mason Rudolph beat you (because he will). Mike & Mike have been complaining all season about how much teams have sold out against them to stop the run. Maybe two ill-timed injuries to your best running backs inadvertently loosened that up for the rest of the season.

Or at least I hope it did. Because I’m not sure how they’re going to solve it otherwise.