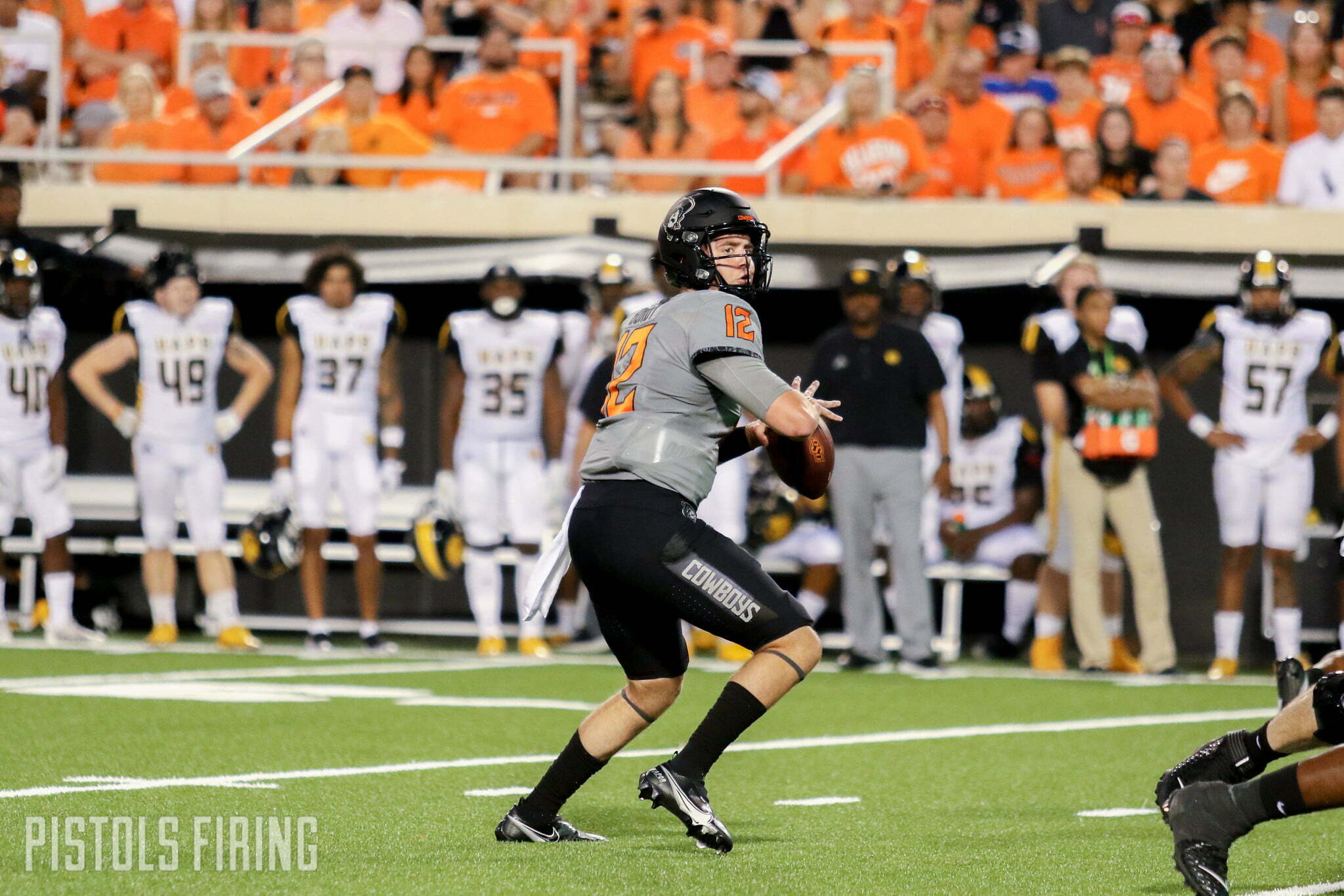 STILLWATER — At one point, Mike Gundy held a record the most consecutive passes attempted without an interception at the start of a career by a freshman. Gunnar Gundy’s first pick came three passes into his career.

The INT wasn’t Gunnar’s fault. It buzzed right off the hands of freshman receiver Braylin Presley. But after that, Gunnar settled down and played well in Oklahoma State’s 63-7 dismantling of Arkansas-Pine Bluff on Saturday in Boone Pickens Stadium. Gunnar finished the day 12-for-20 with 128 passing yards and two touchdowns while running for an extra 42 yards. Not too shabby a start for a kid who grew up wanting to be Oklahoma State’s quarterback.

“Being around here a long, long time, watching people like Mason Rudolph and Spencer (Sanders) and (Brandon) Weeden and all those guys,” Gundy said, “imagining myself doing that one day, playing for OSU, throwing touchdowns, throwing passes, operating the offense, playing quarterback, to actually have that happen, to have a touchdown pass and some runs, get some good playing time was really special for me.”

Gundy had played in two games before Saturday night’s but in both of those previous games he was only in for run plays.

When he entered in the second quarter in Saturday’s game, he handed it off to Dominic Richardson his first four plays. He said was getting antsy.

His first pass came in his second drive, a dump off to freshman running back Ollie Gordon that went for three yards. His next pass went to CJ Tate, but Tate bobbled the ball on his way out of bounds, and it was ruled incomplete. Then came the quick pass to Braylin Presley where the ball whizzed off Presley’s hands and into the gut of a Golden Lion defensive back.

Gunnar said the interception took a little bit of the edge off. Instead of thinking of the moment, he was ready to move forward.

The next series, Gundy led an 11-play, 70-yard drive where he threw for 72 yards (he got sacked at one point, losing some yards). It ended with his first touchdown pass, a fade route to highly touted freshman Talyn Shettron. Good ball, good catch and Gunnar Gundy was on the board.

“I think it’s special,” Gunnar said. “Being around here for all my life, basically, I’ve always pictured myself doing it. For it to actually happen the way it did, to a really good receiver, was really, really cool.”

Gunnar’s next TD was to his roommate Cale Cabbiness, who made a handful of defenders miss on a 25-yard catch-and-run.

It was a celebrated night of firsts, but the experience will be the long-term piece Gunnar and the Cowboys can take from this. Gunnar is a play away from being the Cowboys’ starting quarterback, so him being out there, throwing touchdowns, throwing interceptions, running past people and getting hit is invaluable.

“He played well,” Mike Gundy said. “I thought that he handled the system, he converted some third downs, he ran the ball effectively. I think there was a couple times where they disguised and rolled coverage and instead of forcing the ball into coverage, he pulled it down and took off, which is normal when you’re young and early in your career. I’m pleased with the way he played.”