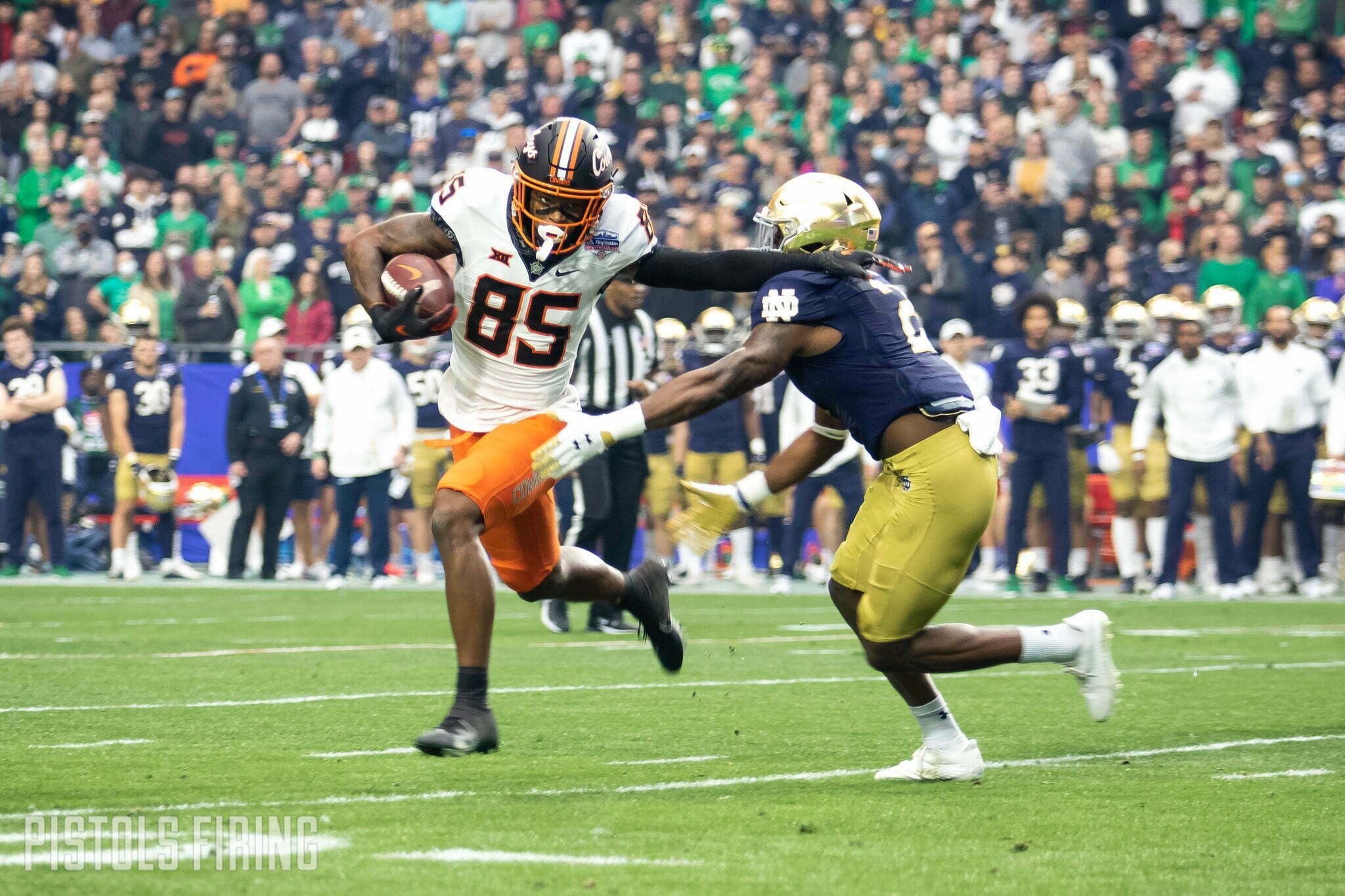 STILLWATER — There are a lot of players who have physically stood out at the Cowboys’ fall camp this season — it’s comes with the territory of Oklahoma State having Rob Glass as a strength coach. But a standout among those standouts is Jaden Bray.

Entering his sophomore season, Bray is listed at 6-foot-2, 200 pounds, up 13 pounds from what he was listed on OSU’s 2021 roster. Bray credits Glass with the added muscle and said he has enjoyed the grind of transforming his body from this past winter to now because he likes “looking good.”

More than his physical attributes, Bray will take on an increased role in 2022 with the exit of Tay Martin. As a freshman, Bray had 13 catches for 250 yards and two touchdowns.

Part of a recruiting class that included four receivers, Bray was an unknown entering last season. Bryson and Blaine Green were both Top 500 recruits with offers spanning from Auburn to Washington. John Paul Richardson was rated lower than Bray, but Richardson had 10 Power Five offers to Bray’s six. Bray was the No. 981 player in the 2021 class, ranking 17th among players from Oklahoma.

“I didn’t know too much about him,” Blaine Green said. “I just feel like in Oklahoma, some guys get slept on. It happens all over the country if you don’t have the opportunities and stuff. Honestly, stars, rankings, they don’t really matter. As long as you play football, you’re a great person, you go out there and put in the work, you have a chance, and Jaden Bray has showed that. I’m proud of him.”

A former basketball player at Norman High School, Bray’s first scholarship offer came in 2019 to play on the hardwood at Southwestern Oklahoma State. On the gridiron, his junior season stats at Norman were better than his senior stats, which probably didn’t help him in the rankings.

In Bray’s junior season, Cade Horton was Norman’s quarterback. Horton, who played baseball at Oklahoma, was recently taken in the First Round of the MLB Draft. That season, Bray had 40 catches for 936 yards and 11 scores. As a senior he had only 26 catches for 420 yards and three scores.

Luckily for OSU, Kasey Dunn was able to get his hands on Bray at a camp, and as he continued to physically develop, the Cowboys offered him after his junior season and stuck it out through his less productive senior year.

“He came to camp, I want to say as a sophomore, and when he showed up, I vaguely remember Dunn and them saying it was a no-brainer,” OSU coach Mike Gundy said. “Now, I could be off on part of that because there’s been a lot of days since then. But I think I’m pretty close.”

Upon arriving in Stillwater, Bray said he had to play catchup on fundamentals, but because of how thin the Cowboys were at receiver last season, he had plenty of opportunity.

Two games into his freshman season, Bray already had 136 receiving yards and a touchdown.

“I always believe in myself,” Bray said. “The rankings didn’t really matter to me. If anything, I was ready to learn and build off the guys that we were bringing in because I remember when we had first got here, we were running routes, and I was like, ‘OK, that’s how it’s supposed to be done.’ It didn’t discourage me or anything. I was just really ready to learn.”

Gundy said Bray was “just out there running around” last season, but added he has since grown a greater understanding for technique, body control, eye placement and coverages.

So now Bray enters 2022 with more than just a good physique, which sounds like a scary proposition for opposing defenses.

“If you look at the kid, you’re just like, ‘Wow,'” Richardson said. “He looks like a freak of nature, and then he gets out there and makes plays. He’s a good kid, smart kid. Can’t really say too much about him. His play speaks for itself.”