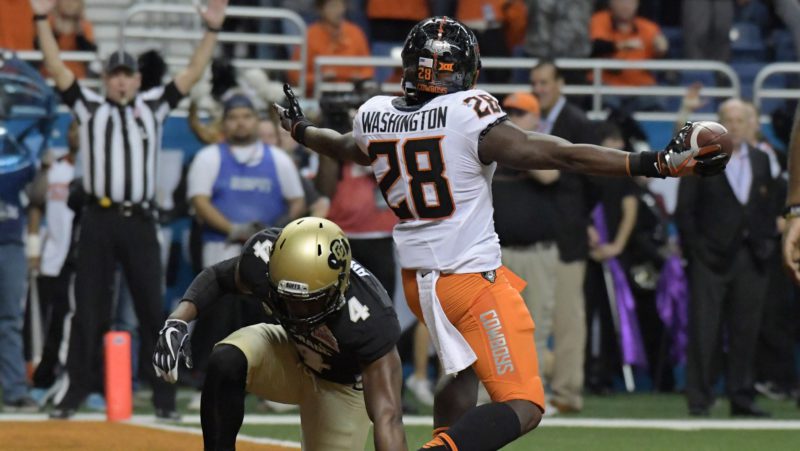 On Mason Rudolph’s first third down of the 2016 Alamo Bowl, he looked to the receiver who has been his first option since coming to Stillwater. An out pass to James Washington for 13 yards set the Cowboys on the course to their first score, going up 3-0 over the Buffaloes early.

The two best players on the Cowboys’ offense didn’t stop there.

The biggest question coming into Thursday night was how OSU’s receivers would match up with the deep, talented secondary of Colorado. Senior corner Chidobe Awuzie drew the James Washington assignment for much of the night.

Washington was up to the challenge.

The playmaking ability we’ve almost become spoiled with was on full display early. His first half saw catches of 26 yards, 21 yards and 42 yards. Not to mention a would-be 50-yard TD ball drop that may have gotten lost in the lights.

In his less than ten minutes in the 3rd quarter, Washington added another 55 yards on three targets, highlighted by a 46-yard pass on the opening drive.

The vaunted Buffalo secondary gave up 171 yards in less than three quarters to Washington. That’s more than they normally give up in the air to an entire team.

Of course the bad news for “the Prez” was that he had to leave late in the third before suffering an apparent finger injury which sent him to the locker room with his team up 17-0.

Luckily, while Washington was getting a splint installed on his left hand, Blake Jarwin caught a 6-yard touchdown pass to put the Cowboys up 24-0.

But before leaving, Washington was able to further cement his place in Oklahoma State history.

Most receiving yards in a season for #okstate:

The junior receiver from Stamford also grabbed his 152nd career reception which places him seventh place ahead of Dez Bryant (147) and just behind Josh Cooper (161).

And the best news of all?

He will be back for another year and will have the opportunity to blow through several more records.