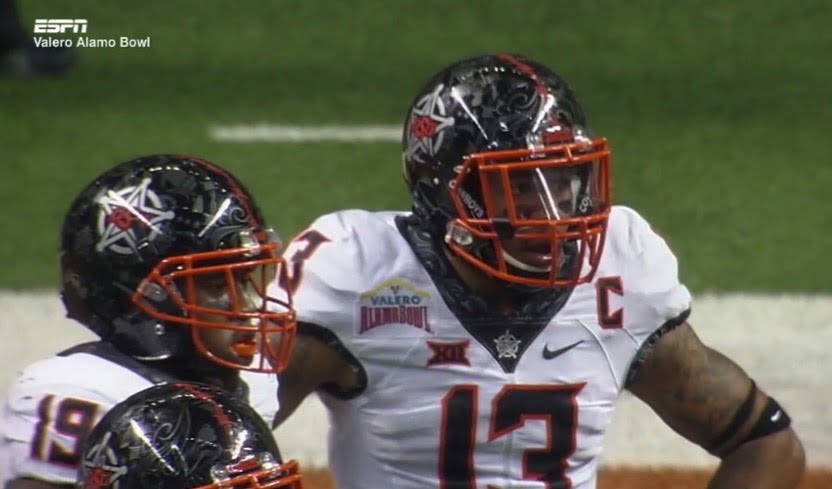 Jordan Sterns accumulated five tackles in the Alamo Bowl on Thursday which brought his career total to 101. In doing so he became the No. 1 tackler in the Mike Gundy era with 325 total and 100+ in each of the last three seasons. He totaled the seventh-most tackles for an OSU player in history.

“My last game, I wanted to share it with my teammate,” said Sterns after the game as he wrapped up a truly terrific four-year career. “You don’t get this back. Coach Gundy does a good job of preaching that. I always absorb it, just living in that moment. I think we did a good job of doing that, soaking it all in.

“At one point I was looking in the stands. It’s crazy because it’s over. But, man, truly a blessing. Just extremely grateful for Coach Gundy, the coaching staff, giving me a scholarship, then these people I met. It’s an honor.

“I just kind of stood back and reflected just on how far we’ve come as a team. Even how far I’ve come. I just watched James [Washington] and Vincent [Taylor] go up and receive their award. Man, took it all in. Like I said, this is last game back home. I’m extremely proud of everybody on this team, coaching staff, everybody. I was just reflecting, thinking about how grateful I was.”

His defensive coordinator is grateful, too, I’m sure. Glenn Spencer’s squad held a team to under 10 points for the second time in three games. Sterns had 33 tackles in those games.

“The last three games of the season, I think the defense really played great,” added Sterns. “We played with a savage mentality. That showed today.”

“He’s hungry to succeed, and that just doesn’t stay between the lines,” Spencer told the O’Colly. “He’s hungry to be successful in life. If somebody hires him, or somebody takes him on their team, they’re not gonna find a more competitive kid with more heart and desire to be good, and to do it unselfishly, that’s not a real big trait in kids these days, so when you find one like him, you hate to let him go.”

Sterns’ head coach added to that.

“I couldn’t be more proud of all of them,” said Mike Gundy. “These guys that are sitting up here (Washington, Taylor, Sterns and Rudolph), they played well tonight, we won a big-time game, and they’re great young men. That’s who we are. Vincent Taylor, Sterns, Mason, James, this team, they’re quality young people.”

Yes, Jordan Sterns had a hell of a career. He’s the best tackler Gundy has ever had and one of the best leaders OSU has ever seen. OSU will be great again in 2017, for sure. But replacing No. 13 will be no small thing.