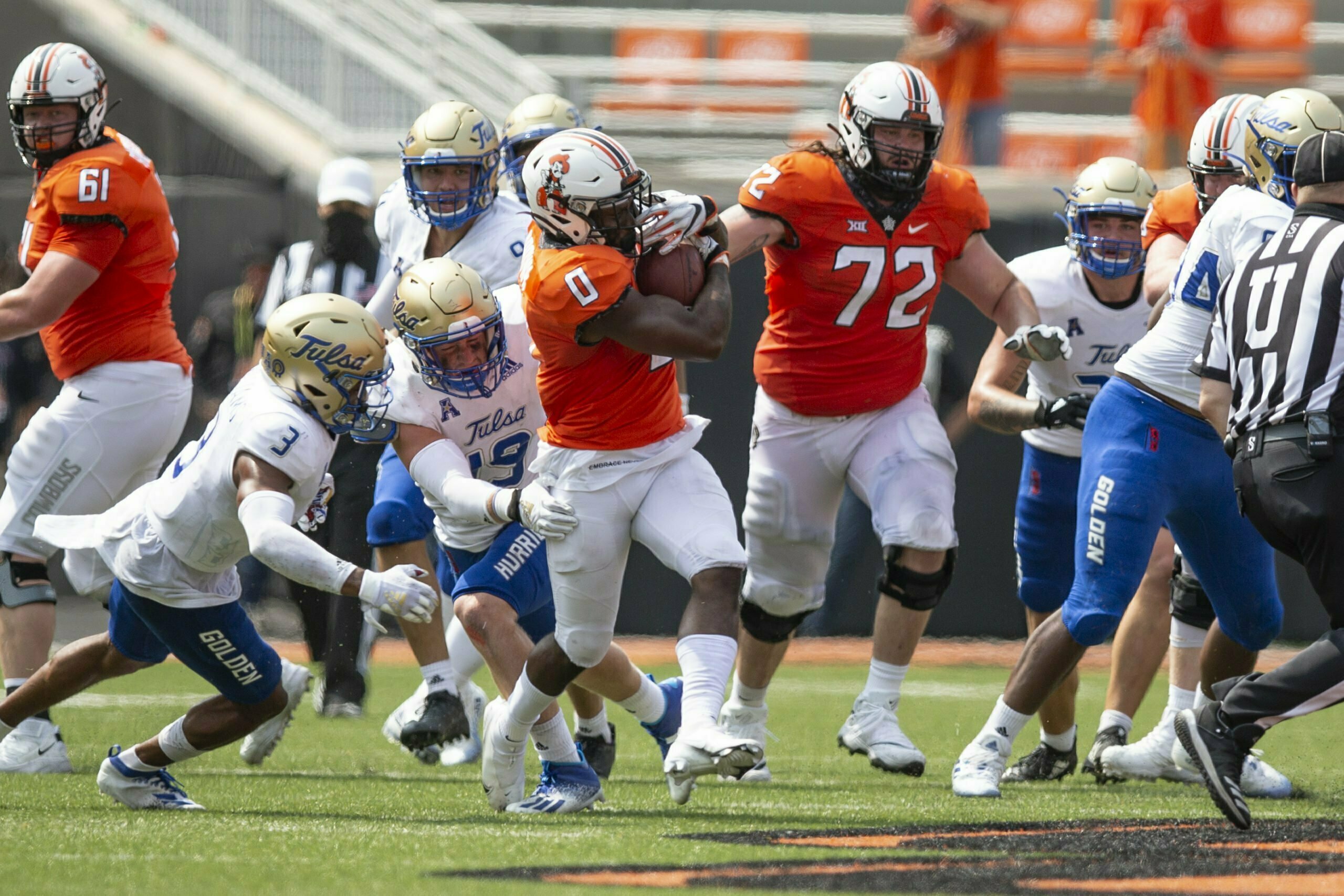 Josh Sills didn’t take a traditional visit before coming to Oklahoma State, but he had been on campus before.

Now an offensive lineman for the Cowboys, Sills was in Stillwater in 2018 with West Virginia. He was the Mountaineers’ starting left guard when WVU went to Stillwater ranked seventh in the country at 8-1 but left 8-2.

In what was a lowlight for the Mountaineers’ season, it was a highlight for the Pokes, who entered the contest 5-5. OSU’s student section stormed the field following an incomplete WVU pass in the end zone, so Sills got a front-row seat at the fanbase he would later play for.

When Sills was looking for a place to transfer in a recruiting dead period about two years later, he said that game gave him a little sense of OSU’s culture.

“Obviously some of those players aren’t here today, but playing a team like that, you can definitely go back to the type of kids that coaches recruit, that they get to come here,” Sills said. “You know they’re gritty. You know they never give up, they’re hard-working.

“Those are the people that I want to be around because that’s how you get the best of each and every person out of every practice, out of every rep, weight room, it doesn’t matter what it is. You push each other every day.”

Not being able to visit when he was in the transfer portal, Sills said he liked how straight up OSU’s staff was with him as well as the pedigrees of offensive line coach Charlie Dickey and strength coach Rob Glass.

Outside of football, things were also a perfect fit for Sills. He received his undergraduate degree in agribusiness management. He is also a fan of similar hairstyles to his new coach.

“I would say that Stillwater is a lot like the community in West Virginia,” OSU coach Mike Gundy said this week. “We’re a population of 50,000 people. He enjoys hunting. He enjoys fishing. He likes the college town environment. I think he feels very comfortable here.”

With as seamless as Sills’ transition has been, it has allowed him to quickly step into a leadership role. ESPN’s docuseries following OSU highlighted his leadership when Sills was giving a passionate halftime team talk with Chuba Hubbard in the Tulsa game.

OSU’s offensive line needed some leadership with Marcus Keyes and Johnny Wilson graduating after last season, but it especially needed it when two players transferred out in fall camp and two starters got injured in the first half of the first game.

“I love Josh,” Jenkins said. “Me and him hang out sometimes even outside of football. He’s a very big inspirational guy, and I’m glad we have him here because without him I feel like motivation would be kinda hard because he’s the one that’s mostly vocal around here. He’s the one that gets everybody going. I’m very appreciative that he’s here.”

Sills said he draws his leadership from his redshirt freshman season at West Virginia, a year where he started 10 games. He said that helps him relate to the younger guys on the line like redshirt freshman Jake Springfield who was a walk-on last season and has now started OSU’s past two games.

“I think the biggest thing that’s helped me is I enjoy hard work,” Sills said. “Both my parents instilled that into me at a young age. Watching them growing up, we didn’t always have the best thing or the nicest thing, but they always made sure my sister and I had what we needed. Seeing that and being around that, it’s really helped shape me into the person I am today.

“Being around these guys, they’re the same way. They come in every day, they get their work done, they do everything they’re supposed to at the best of their ability at a high rate of speed. Those are the people I want to be around because that’s what brings out the best of you each day.”